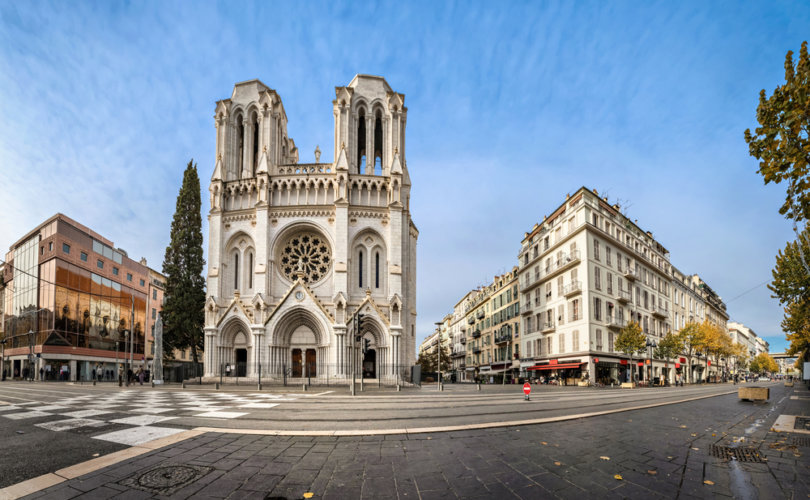 Our Lady of the Assumption in Nice, FranceShutterstock

NICE, France, October 29, 2020 (LifeSiteNews) — Three Catholic faithful were murdered, and several more injured, on Thursday morning in the basilica of Our Lady of the Assumption in Nice, in the South of France. According to police, the perpetrator of the attack was a 25-year-old Tunisian Muslim who claimed to be called Brahim.

The man was seen rushing into the church at 8:55 a.m. to carry out what has been characterized as an anti-Catholic terrorist onslaught. He is said to have entered France at the end of September via Italy.

This year, October 29 marks the celebration of the “Birthday of the Prophet” Muhammad.

According to reports, the assailant slit the throat of (or beheaded) a 70-year-old woman who was quietly praying, killing her on the spot in what resembles an act of Islamic ritual slaughter.

He knifed and killed the church’s guard — some sources say the victim was the sacristan — and repeatedly wounded a 30-year-old woman who was able to flee outside and seek refuge in a nearby bar, where she died shortly afterwards, saying: “Tell my children I love them.”

It is not clear at this point how many other people were injured.

The basilica of Our Lady of the Assumption is situated on the main shopping street of Nice. Local municipal policemen were present: After the alarm, they arrived in the church within ten minutes and were able to overpower the attacker, shooting him twice.

He was seriously injured but, as the mayor of Nice, Christian Estrosi, has confirmed, continued obsessively to repeat “Allahu Akhbar,” the Islamic war cry (“Allah is the greatest”), while being treated by the emergency services before being transported to hospital.

He was not known to the security forces, and contrary to first reports from the scene, according to which the police asked people to take shelter because of the potential presence of other terrorists, he appears to have acted alone.

Cardinal Robert Sarah has responded with clarity to the bloody attack.

“Islamism is a monstrous fanaticism that must be fought with strength and determination,” he tweeted. “It will not put an end to its war. We Africans sadly know that only too well. Barbarians are always the enemies of peace. The West, today that means France, must understand this. Let us pray. +RS.”

Archbishop Michel Aupetit of Paris published a statement saying, “We are dumbfounded by this murderous folly in the name of God … Christ will tell us in the Gospel of All Saints’ Day: ‘Blessed are you when they insult you and persecute you and utter every kind of evil against you [falsely] because of me. Rejoice and be glad, for your reward will be great in heaven.’”

Pope Francis tweeted, “I am close to the Catholic community of #Nice, mourning the attack that sowed death in a place of prayer and consolation. I pray for the victims, for their families and for the beloved French people, that they may respond to evil with good.”

Many Islamic immigrants from Northern Africa live in the South of France. While it is politically incorrect to criticize Islam and immigration in France, many recent Islamic attacks that have taken place over the last years in the country were made by immigrants or people with an immigrant background.

In 2016, Nice was already the scene of a horrific attack when a “local” Tunisian drove his truck into the crowds that were celebrating the national feast day of July 14 on the Promenade des Anglais. 86 people were killed and 458 wounded in an attack that was claimed by the Islamic State.

The anti-Catholic aim of Islamic attacks is not new either: On July 26, 2016, an elderly Catholic priest from a small parish near Rouen was killed by two Islamic assailants who slit his throat. An official process of recognition of Father Hamel as a martyr has been underway in the Catholic Church since 2017. Pope Francis had previously waived the normal waiting period of five years.

As the victims of today’s attack in Nice were seemingly killed out of hatred for the Faith (in odium fidei), their consideration as martyrs is being suggested on social media.

Many church bells rang at 3 p.m. all over the country in homage to the victims — but in Nice itself, all churches have been closed “until further notice.” On social media, some remarked that it would be better to close “all the mosques that have been identified as enablers of hatred.”

French President Emmanuel Macron went to the scene of the attack later on Thursday, where he announced that “between 3,000 and 7,000 military personnel will be in a position to protect all places of worship, in particular the churches, so that All Saints’ Day on November 1 may go ahead peacefully.

Macron also proclaimed, “We shall not give way,” in the same way that he warned, “They shall not pass,” shortly after a history professor was beheaded in Conflans-Sainte-Honorine a few weeks ago by a Chechen Muslim after having shown a pornographic drawing of Muhammad to his middle school class.

Several opposition politicians, including Marine Le Pen, have asked for an immediate stop to immigration in France.

Jean-Frédéric Poisson, presidential candidate for 2022 of the former Christian Democrat Party — now called VIA, “The people’s way” — tweeted: “Horrible. France under attack. Once again. Christians are recurring targets: it is the great replacement of civilization. I express my sorrow for the victims’ families, my anger regarding our limp elites, and my determination to vanquish conquering Islam.”

Bernard Antony, president and founder of the Christian and French defense league AGRIF, observed in a communiqué that Jihadi Islam’s “war of civilization” against France was motivated by its “tangled hatred against the Christian identity of France and against the secular Republic of freedom for blasphemy.”

The Muslim world is presently full of anger against France for its official support of the obscene caricatures of Muhammad and Turkish president Erdogan, and French authorities are fueling that hatred by identifying the French Republic with a “right to blaspheme”

At the same time, as observed by Antony, the country favors the admission of Turkey to the European Union.

The interministerial delegate for the fight against racism announced on Wednesday that a tweet by a Turkish minister calling the collaborators of Charlie Hebdo “bastards” and “sons of bitches” will be officially prosecuted by the French judiciary. “Blasphemies” against Charlie — which specializes in anti-Catholic caricatures too obscene to be described — are not allowed.

Meanwhile, the Bishop of Nice, André Marceau, deplored the attack, calling for a “spirit of pardon,” while the basilica’s rector, canon Philippe Asso, spoke of the “risk of seeing interreligious dialogue being called into question.”

As to the former Prime minister of Malaysia, Mahathir Mohamad, he declared shortly after the murderous attack: “Whatever religion is being brought into question, people who are angry kill.”

He added that Muslims have the right to “kill millions of French people” for “the massacres of the past.” His tweet was removed by Twitter, but only at the insistence of the French minister, because, according to the social media representatives, “the tweet could be of interest to the public.”