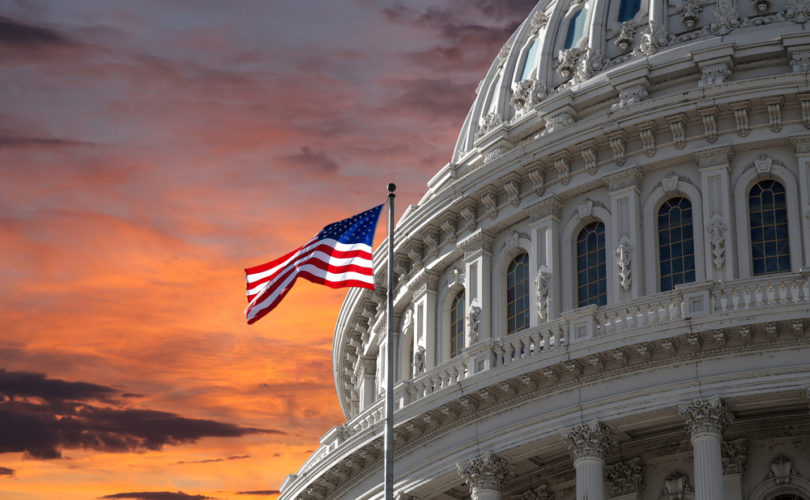 WASHINGTON, D.C., September 24, 2015 (LifeSiteNews) — The U.S. Senate has voted down advancing the Pain-Capable Unborn Child Protection Act to debate.  Prolifers are not entirely disappointed, but are noting three sell-outs among the ranks of Republicans.

The majority of senators wanted to advance the bill, which would protect babies at least 20 weeks beyond fertilization (which is equivalent to 22 weeks of pregnancy — about the start of the sixth month), to a Senate floor debate. Fifty-four senators voted to move the prolife bill forward, but the Senate requires 60 votes to avoid a filibuster.

Forty-two senators —40 Democrats and two Republicans— voted against advancing the bill, which included exceptions for rape and incest and “the life of the woman” (which has always been a universally-recognized exception in those extremely rare cases).

Laurie Higgins at Illinois Family Action described the bill as preventing “the torturous deaths of 18,000 tiny, defenseless human beings every year, humans who, while able to feel pain, are being crushed and dismembered in their mothers' wombs.”

Collins' Maine is the most pro-abortion state in the nation.  She says she is against late-term abortion, but complains that the prolife bill didn't include strong enough exceptions.

“I have advocated that we add language that would provide an exception when the woman is at 'serious risk of grievous injury to her physical health,'” Collins wrote, explaining her voting down the prolife bill.  But medical professionals agree, there are no situations where abortion is medically necessary to save the life of the mother.

Over one thousand doctors and medical researchers in obstetrics and gynaecology have signed the Dublin Declaration, a document stating that abortion is never medically necessary to save a mother’s life.  Former abortionist Dr. Bernard Nathanson testified in 1991, “If women with heart and liver transplants can be carried successfully through pregnancy, we can no longer conceive of any medical condition which would legitimize abortion.”

The physicians and researchers admit that some procedures in rare circumstances, such as surgeries for ectopic pregnancies, are necessary and do unavoidably result in the conceived baby's death.  However, they say there is “a fundamental difference between abortion, and necessary medical treatments that are carried out to save the life of the mother, even if such treatment results in the loss of life of her unborn child.”  Such surgeries are not direct abortions, “the purposeful destruction of the unborn child,” the doctors state.

Collins also justified her “No” vote in the life-protecting bill by saying the rape and incest exceptions have “language problems.”  Prolifers point out the fact that the bill does have exceptions for rape and incest, even though babies conceived by rape or incest feel pain the same as any other baby.

Sen. Mark Kirk of Illinois also voted against the prolife bill advancing to the Senate floor.  Higgins commented that Kirk's “moral compass is so distorted that I don't think he could distinguish right from wrong on essential matters like life, family, marriage, children's rights, and sexuality if it slapped him upside the head. … He is feckless, morally compromised, and undeserving of office.”

Sen. Lisa Murkowski “missed” the prolife vote.  “She had prior travel commitments,” excused her spokeswoman Karina Petersen, without revealing where Murkowski is traveling, or why.  Reading a prepared statement, Petersen then admitted that Sen. Murkowski “does not support the bill that the Senate failed to advance today.”

Murkowski, who has made both prolife and pro-abortion statements, is up for re-election next year.

Higgins has advice for Collins, Kirk, and Murkowski.  “The Republican Party errs when it subordinates the social issues –a reductive and ignorant term– to foreign and fiscal policy.  As long as it continues to do so, our country will continue its downward spiral,” she wrote in response to Kirk's “No” vote.  “If the GOP at every level and including in primaries refuses to take sides on feticide, we are in a moral free fall of catastrophic proportions. If every single person who knows truth would speak it unequivocally and boldly, we could change our culture.”

The bill's sponsor, Sen. Lindsey Graham, reiterated the importance of his legislation.  “Scientific evidence tells us an unborn child can feel pain. Pain medication is administered directly to the unborn child in second-trimester fetal surgery, in addition to anesthesia. The unborn child shows physical, chemical, brain and stress responses demonstrating pain at this stage of development.”

Politico reports that prolifers still view Tuesday's vote as a first step to ultimate victory.  Sen. Lindsey Graham, sponsor of the bill and presidential candidate, called the vote a “historic day for the pro-life movement,” as he has been trying to get a floor vote for a long time.  “We took the first vote in the Senate and were able to see where every Senator stands. Today, the battle begins working to bring more supporters to our cause.”  Echoing those sentiments, Sen. John Cornyn vowed after the vote, “This is only the beginning.”

Prolife Congressman Trent Franks (R-AZ) noted on Facebook, “It may be a slower process than many would like, but these steps are vital.”  Rep. Franks adds, “I’m convinced the tide of the American conscience will only continue to shift toward life and away from dismembering unborn children in the womb.”

Graham concluded, “I view today’s vote as the start of a journey, much like the one we used to pass…the Partial-Birth Abortion Ban into law. … We are on the right side of history.”