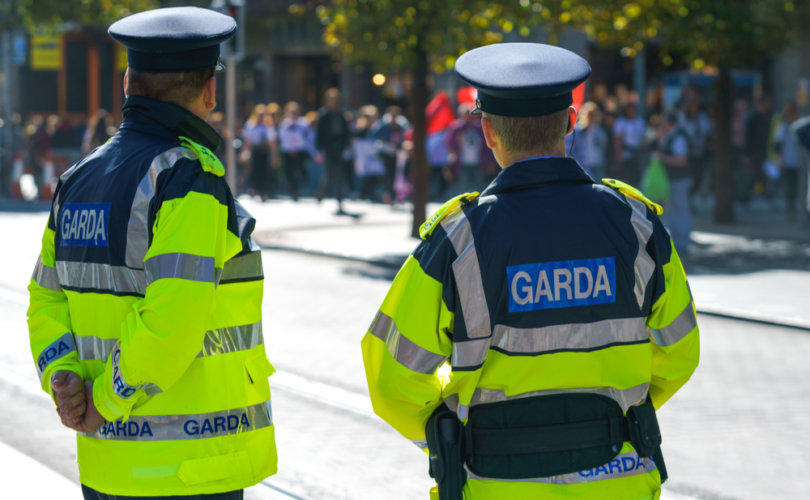 WATERFORD, Ireland, January 14, 2021 (LifeSiteNews) – Three men have been arrested by Irish police in connection to broadcasting Mass on speakers outside a cathedral, and for not giving their names to police.

On Sunday, January 10, four men positioned themselves outside Most Holy Trinity Catholic Cathedral in Waterford, Ireland. They had two amplifiers with them and reports state that the men were “broadcasting Mass on speakers.”

The regular Sunday Mass in the cathedral began at midday, and began to be live-streamed online, half an hour before police appeared.

The police officers arrived on the scene at 12:30 p.m. and questioned the group. Local media reports that the police, or Garda, spotted a “vehicle parked some distance away from the men,” and on that basis made the assumption that the four men had traveled more than the currently permitted 5 km from home, without a “reasonable excuse.”

Under the current national lockdown, travel is limited to certain “essential purposes.” Worship has been banned, but churches and places of worship have been permitted to remain open for private prayer.

Upon approaching the men, Garda officers told them that they were in breach of lockdown restrictions, demanding to know their names and addresses. While one man complied by giving his details, the remaining three did not, and were subsequently arrested.

Gript Media has a video of the event, showing three police officers confronting the three men, outside the cathedral doors. The men were positioned in the cathedral’s square, in the almost empty pedestrian-only street. It is unclear whether the men were complying with the physical distance restrictions at the time the police approached them, but the short video does not seem to show that there were in breach of such guidelines.

The Garda Press Office confirmed to LifeSiteNews that at approximately 12:30pm, having failed to provide Gardaí with names and addresses, the three men were arrested under the provisions of the Health Act, 1947. All three, one in his late 30s and two in their late 60s, were taken to Waterford Garda Station and released without charge a short time later.

Files are now reportedly being prepared for the Director of Public Prosecutions.

The new version of the Health Act of 1947, updated in line with COVID rules, now states: “A member of the Garda Síochána who has reasonable grounds for believing that a person is committing or has committed an offence under this section may require the person to state his or her name and address.”

If an individual does not give his name, then he commits “an offence,” can be subsequently arrested “without warrant,” and subjected to a fine of up to €2,500 or a term in prison of 6 months.

Responding to the news, one individual on Twitter noted the hypocrisy of the police, pointing to the media and police approval of large gatherings following the death of George Nkencho, who was shot by police after he threatened members of the public and the police with a knife: “The state of Ireland right now. In one we see state propaganda cheering on the gathering of 500 people during a Level 5 lockdown, in the other three men were arrested for gathering illegally outside Waterford Cathedral.”

Government guidance specifically states that “no organised outdoor gatherings should take place,” yet no police action was taken when a large number of family and friends of Nkencho gathered to release balloons in his memory.

While the official reason for the arrest was that the three men did not give their details when asked, the link to the church cannot be ignored. Indeed, it is not the first time since COVID lockdowns were put in place, that the constitutional right to worship was attacked by police action.

Back in November 2020, Fr. P. J. Hughes of Cavan was also threatened with arrest, a €2,500 fine and a 6-month prison sentence, simply for saying Mass. Under the lockdown at the time, as well as the current one, Mass has been unconstitutionally banned, and for the first time since the days of Catholic persecution, between the 1530’s to the early 1800’s, priests now face jail for saying Mass.

Nor was he the only priest to face such a threat, as police in Cork warned a priest they would “apply the full rigours of the law” if he continued celebrating Mass with people present. The Irish Catholic reported on the anonymous priest, who termed himself a “conscientious objector” to the ban on public worship. He had been saying public Masses for the previous weeks of lockdown, with an average of 10 people attending, but suggested that someone had informed the police after watching his Mass online.

Speaking to LifeSiteNews in November, a priest commented anonymously on the situation: “I think it’s vital that we, priests and religious particularly, be realistic about what is now happening in our own countries and around the world to religious freedom and civil freedom and not to be deterred from the challenges that now face us.”

“We are blessed and sanctified by the blood of so many that have gone before us, and so with continued effort in our interior lives, or a reanimation if it is necessary, we will be able to suffer courageously for Christ and His people,” he continued.