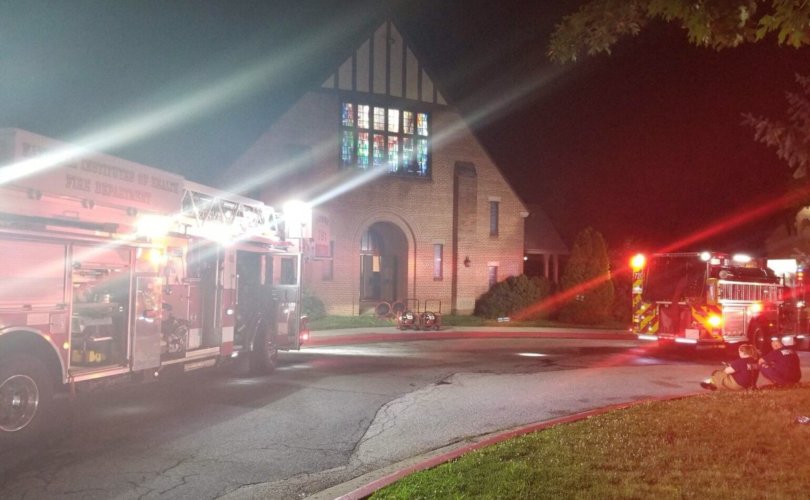 “People are coming in today shocked,” said Patricia Zapor, director of media relations for the Archdiocese of Washington. “There were some small attempts to burn some of the pews. Some books were shredded, and the Stations of the Cross were removed from the wall.”

“We are a community of faith. And we are deeply committed to resilience and recovery,” Zapor continued. “This is a classic example of being tested by fire. And the St. Jane Parish community will rise and will come through this in fine form.”

“In both cases, there were some associated vandalisms,” said Peter Piringer of Montgomery County Fire and Rescue. “There are similarities: not too far apart, relatively same time of night occurring and both being churches.”

“Again, this was an arson. Intentionally set fires,” Piringer emphasized.

County executive Marc Elrich condemned the vandalism, saying, “Attacks on houses of worship in Montgomery County are completely unacceptable. The criminal activity that took place over the weekend does not represent the values of inclusion and equity that we are striving for in the communities of this County.”

“I have talked with our Fire Chief and Police Chief and have asked them to keep me updated on the progress of the investigation,” he said.

“We encourage anyone with any information to call the Montgomery County Fire and Rescue Services Arson tip line,” Elrich added.

Last week, pro-abortion activists defaced the doors of St. Bernard Catholic Church in Madison, Wisconsin as abortions ceased in the state after the reversal of Roe v. Wade.

The violence appears to have no clear end in sight, with the Department of Homeland Security predicting terrorist attacks could continue “for weeks.”