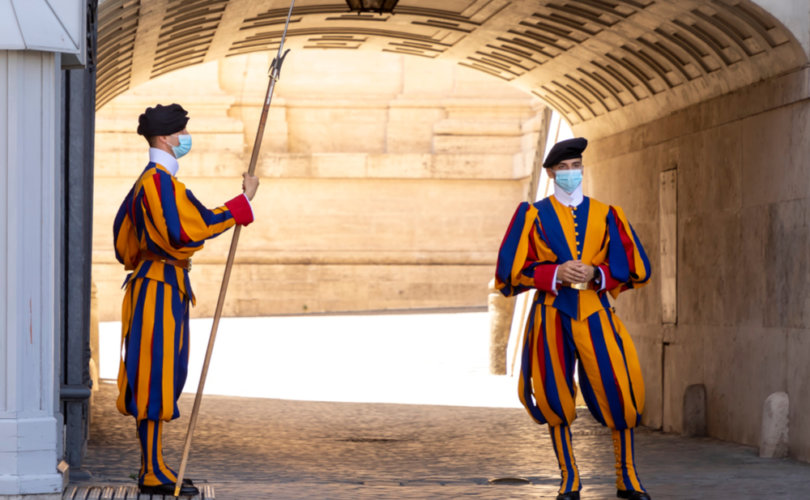 Vatican correspondent Edward Pentin wrote in a Monday report that three members of the Vatican’s iconic military force resigned from their positions after the abortion-tainted COVID-19 drugs were made a condition of employment.

Breitenmoser said another three guards have been temporarily suspended until they are “fully vaccinated.” After having initially delayed getting the experimental drugs, the guards have reportedly now taken their first dose and will be reinstated to their roles pending “full vaccination.”

During his flight back from Hungary and Slovakia, Pope Francis said that “everyone in the Vatican has been vaccinated, except for a small group that we are trying to help.”

According to Religion News Service, “the pope also referenced cardinals who are skeptical about the vaccine and hoped they could be persuaded through dialogue and with evidence.”

Many Catholics have chosen not to take the shots due to their close ties with abortion.

J&J’s shot was directly produced in the human fetal cell line PER.C6, which was derived from retinal tissue taken from an 18-week-old baby boy who was aborted in the Netherlands in 1985 and converted into a fetal cell line in 1995. Meanwhile, Moderna and Pfizer both used cell lines derived from aborted babies for testing.

The abortion-connections and coercive strategies used to enforce inoculation have led Bishop Joseph Strickland of Tyler, Texas, to condemn COVID jab mandates, saying he will never “take a vaccine that I believe is wrong.”

“The aborted fetal cells in the vaccines does not appear to bother this pope,” wrote Canadian physician Dr. Zoltan P. Rona, M.D., in response to the resignations of the Swiss Guards following the Vatican “vaccine” mandate.

The aborted fetal cells in the vaccines does not appear to bother this pope. Pope mandates vaccination: 3 members of the Swiss Guard resign https://t.co/lQBb4afLhk

According to Breitenmoser, the jab mandate for the Swiss Guard “is a measure that is aligned with those adopted by other armed forces in the world.”

In the U.S., for instance, the Department of Defense has mandated COVID shots for all military personnel after the Food and Drug Administration gave the green light to the Pfizer-BioNTech mRNA drug.

Likewise, Canada’s Armed Forces (CAF) announced that COVID-19 shots will be mandatory for all of its service and civilian members.

The military mandates have faced pushback, with some servicemen seeking legal help to resist the jabs. Meanwhile, U.S. lawmakers have introduced legislation which would prevent the military from dishonorably discharging servicemen who refuse the mandatory COVID shot.

Some members of the Swiss Guard had also attempted to resist the mandate.

As reported by the Register, at least 30 of the 135 members of the Pope’s historic and colorful army corps had attempted to buck the mandate after it was floated in July.

Only the three guards who resigned over the weekend made the decision to quit rather than get vaccinated.

According to the outlet, Swiss Guard Commander Col. Christoph Graf succumbed to pressure to get the jab several days ago.

Sources told the Register that Graf only agreed to get inoculated after being “threatened,” however the Vatican has not yet confirmed whether the allegations are true.

The resignations of the Swiss Guards came after the roll-out of a health certificate mandate in the Vatican October 1, which requires showing proof of immunity to COVID-19 to enter the city state.

The so-called “Green Pass,” already widely in use throughout Italy, provides evidence that its carrier has either gotten inoculated against the virus, received a negative test, or recently recovered from the virus.

The “Green Pass” must be presented to enter public spaces, though Reuters reported that according to the Holy See, “an exception will be made for those attending [M]ass ‘for the time strictly necessary for the rite.’”

While visitors to the Vatican are permitted to show proof of prior infection and recovery or a negative test to gain entry, the Swiss Guards have been given no option but to become “fully vaccinated,” Reuters reported.

According to NCR, the COVID jab mandates and required use of the Green Pass to enter the Vatican come despite a lack of serious impact from the virus within the city.

“Since the crisis began, Vatican City State has reported zero deaths within its jurisdiction and just 27 reported cases, although most of them (11) were within the Swiss Guard,” the report stated.

The article also noted that the most recent case of the virus within the Vatican was reported in October 2020.