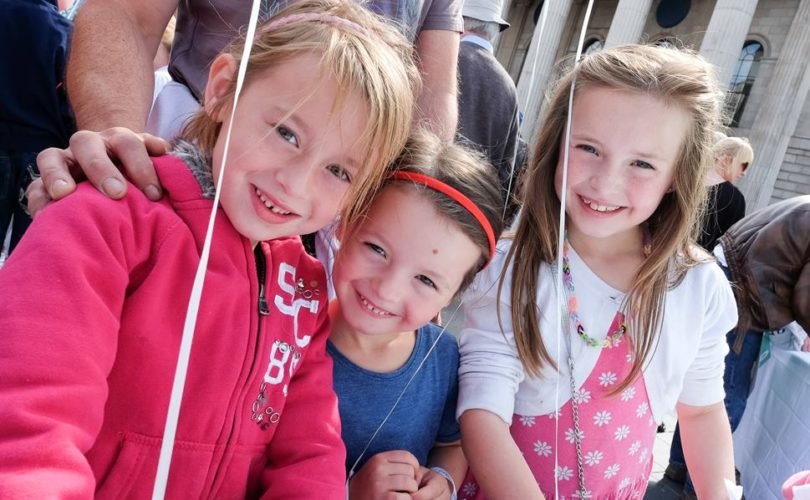 Courtesy of All Ireland Rally for Life

Three thousand rallied in Dublin Monday, calling for the overturning of the Irish coalition government’s new abortion law that has resulted in the deliberate premature delivery of a 25 week-old infant, named “Baby Hope,” who is now struggling for survival in a Dublin hospital.

The law, passed last summer, allows direct abortion and early induction through all nine months of gestation if doctors determine that the mother’s life is at risk, even if the risk is only a claim of suicidal intentions.

Pro-life objectors predicted that the bill would put doctors in such situations. One of the lead voices against the bill, The Life Institute’s Niamh Ui Bhriain, said Monday's rally in Dublin that if Prime Minister Enda Kenny “has a conscience, I hope he is ashamed of what his law has deliberately inflicted on that tiny little baby boy, gasping to take a breath.”

“His abortion law has fallen at the very first hurdle, and Mr. Kenny now needs to repeal this cruel and unworkable abortion act,” she told the crowd at the Vigil for Hope, the latest in a series of rallies this month.

The pro-life campaign group Youth Defence said they will be delivering 5,000 Get Well Cards for the baby to the Department of Health next week to bring the bill’s contradictions to the attention of legislators.

Dr. Eoghan de Faoite, one of the organizers, pointed out that the woman in the Baby Hope case, who has not been named, was under the care of the Irish Family Planning Association (IFPA), one of the main supporters of the bill and Ireland’s busiest abortion lobby groups. De Faoite said that her case had been “mismanaged” and was the “antithesis of obstetrical care.”

“This case broke every rule of medicine,” he said. “Firstly, the IFPA failed to adequately address this woman’s mental health status when she twice expressed suicidal ideation to them; secondly, abortion was prescribed as a treatment for her suicidality, when every doctor knows there is no evidence for this; and thirdly, an obstetrician was obliged to forcibly deliver a healthy baby at 25 weeks, where no medical basis existed.”

“Vulnerable women expressing suicidal thoughts need to be given the correct treatment of support, psychotherapy and medication where needed,” he added. “This is how suicidality is treated. However Fine Gael’s legislation forces doctors to abandon evidence-based medicine and perform abortions on request, throughout all nine months of pregnancy.”

The child’s mother, who has not been identified, is reported to have been under the care of the Irish Family Planning Association, one of the country’s busiest abortion lobby groups, and to have threatened suicide if she did not get a “termination.” The Health Service Executive has said there will be an internal review to “end any inaccurate commentary surrounding this matter currently.” The media has reported that the child has been “placed in care.”

The Irish Times reported that “a panel of two psychiatrists and one obstetrician agreed she was suicidal” but that since the child was found to be healthy, it would only be induced early, not killed directly. The Times said the woman protested and went “on thirst and hunger strike” until a court order was obtained to forcibly rehydrate her.

“It was agreed that as the foetus was viable it should be delivered by Caesarian section. Though she initially refused this option, she subsequently agreed to it,” the Times report says.

At the same time, the hard core of Ireland’s abortion lobby has criticized the actions of doctors to try to save the child’s life, saying he should have been killed by direct abortion earlier in the pregnancy. The Guardian quoted Doctors for Choice, who said, “If a young rape victim, certified as requiring an abortion due to the risk of suicide, cannot access abortion services, then the legislation and its implementation are clearly fatally flawed.” The group said the case demonstrates the need to repeal the Irish constitution’s pro-life amendment so that such children can simply be aborted without hesitation.

The Times quoted the National Women’s Council of Ireland (NWCI), who also called for the constitutional clause to be removed. “No civilised society can stand over a law which sees a woman lose her bodily autonomy once pregnant. No more desperate women and girls should have to resort to the courts here and in the EU. The time for action is now,” the group’s statement said.

Earlier this month, the Irish government issued guidelines that confirmed pro-life advocates’ worst fears. They allow for an early induction instead of outright abortion and then oblige doctors to treat the premature child as a patient if he survives the procedure.

The Baby Hope incident, following so closely on the publication of the government’s guidelines, has generated much heat in the abortion debate in Ireland. Minister for Justice Frances Fitzgerald, however, would only say that the government would be “monitoring” the new law.

Dr. Ruth Cullen, writing in a Times op ed, said that the abortion lobbyists are embarrassed by the case, since it demonstrates the internal contradictions and deception of their position. “The baby is a reminder to all who would listen that abortion is not a moral abstraction,” she said.

“It is a matter of deliberately destroying a small human life in the name of ‘choice’ or, even more absurdly, ‘equality.’ The baby was one obstetrician’s assessment away from being aborted.”

“The baby only just survived the Protection of Life During Pregnancy Act but, because delivered so obscenely early, still struggles for life and could face lifelong disability. For what purpose?”

At the time the bill was being debated, the parliamentary committee heard unanimous testimony from psychiatric professionals saying that abortion can never be regarded as a “treatment” for depression or suicidal ideation. Pro-life presenters to the committee also pointed out that the bill would oblige doctors to deliberately inflict on infants all the health problems, some of them lifelong, on children who survived early induction.

Dr. Sean O Domhnaill, a consultant psychiatrist and psychotherapist who gave evidence to the committee, wrote in an August 18 op-ed in the Irish Independent that the law, and its guidelines, have “opened up an appalling vista” for “overstretched practitioners.”

“It is to the eternal shame of this Government, then, that it did not listen to the evidence presented to two separate Oireachtas hearings on abortion and suicidality.” The law and the guidelines have “created extraordinarily difficult and unworkable scenarios for doctors seeking to best serve women in pregnancy,” Dr. O Domhnaill wrote.

In his submission to the Joint Oireachtas Committee on Health and Children last year, Dr. O’Domhnaill said he was among those who questioned “whether this consultation is meaningful if the government does not take the expert evidence into account in regard to abortion and suicidality.”

He said there was “complete agreement from all the psychiatric experts” that abortion was useless as a response to suicidality. “I find it quite extraordinary then, that this government has seen fit to disregard all the evidence accrued and to cynically propose legalising abortion on suicide grounds.”

He told the committee bluntly that the suicide ground was a swindle: “If there is no case for treatment of suicidal intent using abortion, then there is no point in proceeding with this legislation.”

“We should nail the lie at this point, that Ireland has any obligation imposed by the European Court of Human Rights to legislate for abortion. The ECHR has requested that we 'clarify' our law, not write new law!” he said.

Among the legal questions for physicians, Dr. O Domhnaill wrote in the Independent, is their liability for having deliberately acted to induce early, thus visiting potentially serious, long-term health problems on children.

“What will happen to the child, who has been purposely burdened with all the possibly serious complications of prematurity which include cerebral palsy, blindness and brain damage? Will the doctors – and the State – also be liable to be sued by that child in later years?”