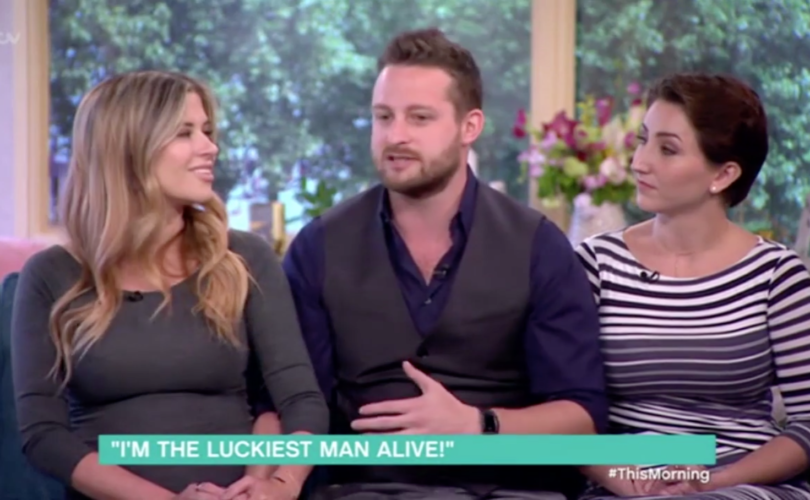 Adam Lyons, 36, lives openly with two women, 28-year-old Brooke Shedd — with whom he has a two-year-old son, and 27-year-old Jane Shalakhova — who is eight months’ pregnant with his third son. He already has a seven-year-old stepson from yet another relationship.

“Three parents are better than two,” Lyons told the New York Post. “It enables us to manage daily life so much better.”

He says he notices “normal” two-person couples are often exhausted and struggle to keep up with work and children. “With three people, it’s logistically so much easier. … We share out the responsibilities, and it fits our sexual preferences too.”

“This should be the future of relationships, where people are able to enjoy love in any way they feel works,” Lyons advocated. “Three people and three parents makes so much sense to us.”

The unmarried polygamous arrangement has been going on for five years, which proves, Lyons says, “we’re a real family with healthy, happy kids.” All three say they are “setting a good example” for Lyons’ stepson, Oliver.

All three also admit they occasionally bring in a fourth sex partner. “We’re still open to fun when it comes along,” Lyons said. “We do sleep with other people outside the three of us” and “if we wanted to add someone, I’m sure we could.”

“We still make time to go to strip clubs together,” Shalakhova happily added. “We just hang out and have fun there.”

Shedd hints at a possible future political front in the culture wars. “I would definitely love to get married to Adam and Jane. It’s something we’ve always wanted, even though it’s not legal.”

Shedd says one thing is certain. “We definitely want a few more kids.”

“This is a form of child abuse, pure and simple,” National Organization for Marriage President Brian Brown told LifeSiteNews. “A child has a mother and father … period. To introduce an additional sexual partner into the home is to create confusion and chaos for an innocent child.”

Brown said this proves what opponents of homosexual “marriage” knew all along.

“We predicted that this would be the next step with the court creating the legal fiction of same-sex ‘marriage:’ This is a further step down the path of sacrificing children’s real needs to the sexual desires of parents.”

“I pray for the children who are being robbed of their innocence in such a home,” Brown added.

Dr. Mark Regnerus, professor of sociology at the University of Texas at Austin, expressed concern to LifeSiteNews over a lack of stability for the children.

“From a social scientific perspective, this is an inherently unstable arrangement — and we know stability is good for children,” the professor explained.

“Adding children to the ‘mix’ is likely to destabilize the (polyamorous) arrangement, whereas it often functions to unite a marriage between a man and a woman,” Regnerus observed.

Jennifer Johnson, the Ruth Institute’s director of the Children of Divorce Project, has seen the damaging effects of non-traditional family structures on children.

“These adults have created a structural inequality for the children and are celebrating it,” she explained to LifeSiteNews. “This is very typical for adults in our culture, who place their sexual liberty ahead of family structure equality for their children.”

“Family structure equality means that kids are raised with their own married mother and father, and that they don’t have step and half siblings to contend with,” Johnson illustrated. “Mom, dad, kids. That is equality from the child’s point of view.”

Johnson’s book, Marriage and Equality: How Natural Marriage Upholds the Ideal of Equality for Children, notes:

“Children are observant. Any school-aged child can see which of them live with their own married parents and which do not. They can see that some kids know and are connected to both halves of their origins, and others are not. If a particular child thinks or feels something about the inequality in which he finds himself, his thoughts and feelings may not be welcome. This is because they cannot be welcome. To welcome those thoughts and feelings might cast doubt upon the structure of the family itself.”

This inner disconnect is most often only acknowledged years later, once the damage is done to the child.

“For example, the now-adult children of unilateral divorce are finding their voices and beginning to speak out,” Johnson said. “They were silent for many years because of not wanting to hurt their parents, feeling too afraid to reveal their true feelings, and feeling isolated.”

Johnson says the pain, insecurity, and inner conflict that adult children of non-traditional family structures witness to shows that polygamous arrangements like Lyons, Shedd, and Shalakhova’s are deeply harmful.

“They are now telling their stories, and what they have to say isn’t pretty,” Johnson said. “It will undermine the belief that ‘kids are resilient.’”

The current generation is cursing the coming generation with an unbearable psychological and emotional (and sexual) burden.

“I will not be surprised when all the other kids of other kinds of family structure inequality also grow up, find their voices, and tell the ugly truth about what it was like to have their own intact families sacrificed on the altar of sexual liberation,” Johnson added.

Family Research Council’s Peter Sprigg pointed out that if Lyons’ “arrangement” is true, it confirms the many warnings of concerned Christians.

“Those of us who opposed the redefinition of marriage to include same-sex couples were routinely mocked for making ‘slippery slope’ arguments suggesting that such eliminating the male-female requirement for marriage would lead to further redefinitions, such as eliminating the requirement that marriage be limited to two people,” the senior fellow for policy studies told LifeSiteNews. “The slope is proving even more slippery than I might have imagined.”

Sprigg echoed his pro-family colleagues’ concern for the children.

“Living in a household with their mother, father, and another woman they also refer to as ‘Mom’ is likely to create confusion about their place in the world,” he explained. “As they grow older, there may well be rivalries between the half-siblings who have different mothers — as is clearly seen in the polygamous families of the Old Testament.”

“This ‘throuple’ is even more likely to eventually break up than a typical married couple, which can cause lasting trauma to a child,” he said. “While they present a rosy picture in this article, it is almost inevitable that jealousies would arise in this situation.”

“That’s not to mention the destructive role model of self-indulgent promiscuity that these three are providing for the children in their home,” the family advocate added.

“I would think that it is not only conservatives who should be concerned about such an arrangement, but feminists as well,” Sprigg noted. “One rarely hears of a woman sharing a household with multiple male sexual partners. If this model were to spread, it would mean more men would have difficulty finding wives, and a surplus of unmarried men in a society is a recipe for instability.”

“The one-man, one-woman model of marriage is one of the most egalitarian social institutions,” Sprigg concluded, “because it maximizes the likelihood that everyone, regardless of social status, will be able to find a suitable mate.”