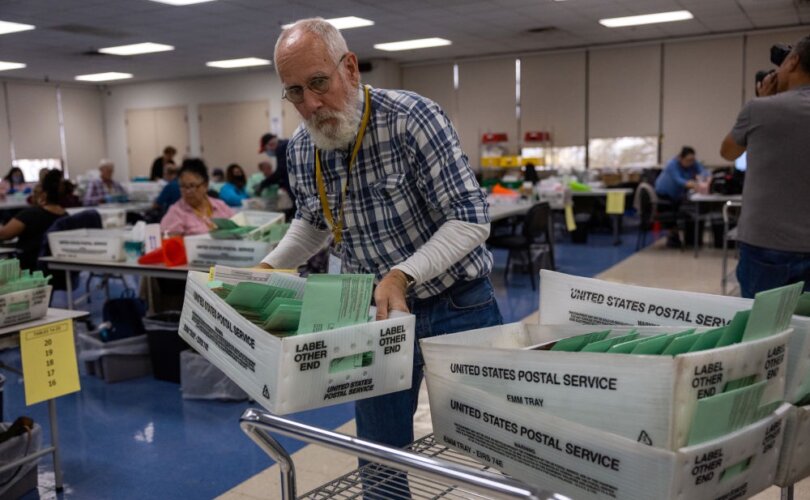 PHOENIX (LifeSiteNews) — With hundreds of thousands of votes still to count as of Wednesday morning, election officials in Maricopa County, Arizona say they’ll release updated midterm election numbers every evening until the tabulation process is complete, even if it takes through the weekend.

The news comes after 20% of voting machines broke down Tuesday, exacerbating delays in Election Day vote-counting.

Officials in the beleaguered Arizona county on Wednesday said over 400,000 votes still needed to be counted as of that morning, “including a record number of early ballots that were dropped off on Election Day,” KTAR News reported.

Maricopa County had more than 400,000 ballots left to count as of Wednesday morning, including a record number of early ballots that were dropped off on Election Day, officials said. https://t.co/iZmtDjqOq1

According to the report, remaining votes included 86,000 absentee ballots turned in over the weekend, 50,000 dropped off Monday, and 275,000 submitted Tuesday.

Board of Supervisors chairman Bill Gates said during a press conference the work of tabulating outstanding votes is expected to continue until Friday but could extend through the weekend.

Gates said election officials had “anticipated that we would have 95-99% of all the ballots counted and reported by Friday.”

“We have no reason to change that estimate,” he said. “If we do, we’ll let you know.”

On Wednesday, lawyer and founder of conservative legal group Center for American Liberty Harmeet Dhillon assured voters that while the votes “are not yet tabulated,” the “volume of votes on [Election] Day” is “a good sign for Kari Lake,” the Trump-endorsed Republican gubernatorial candidate running against Democratic challenger Katie Hobbs.

“[W]e will be monitoring the counting closely!” Dhillon said.

These are not yet tabulated. This volume of votes on E Day a good sign for Kari Lake but we will be monitoring the counting closely!

“We got this, Arizona!” said Lake, a former television news anchor who has generated national name recognition for her charismatic personality and conservative agenda.

Later in the morning, Lake remarked that as the numbers from the remaining ballots came in they broke largely in favor of her campaign.

News about Maricopa County’s ongoing vote tabulation come after reports emerged hours after polls opened Tuesday that a large percentage of tabulating machines in the county were experiencing errors that stymied voters attempts to submit their ballots.

The chairman of the county’s Board of Supervisors told Fox News on Tuesday the county was experiencing “some hiccups with about 20% of these tabulators,” but stressed that Arizona voters will have their ballots counted if they place them in a box to be counted later by election officials.

On Tuesday, the campaigns of Lake and Republican U.S. Senate candidate Blake Masters filed an emergency suit requesting an extension of voting hours in Maricopa County to accommodate voters whose opportunity to vote in-person was allegedly “decreased” by voting machine errors. The request was rejected.