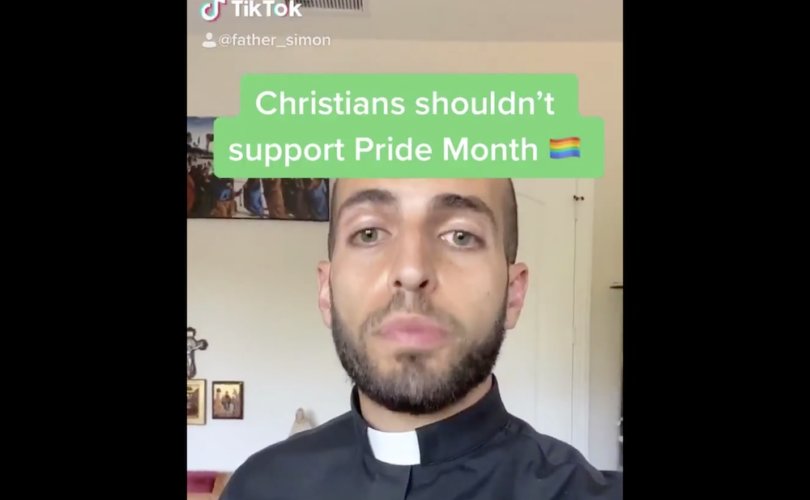 June 8, 2020 (LifeSiteNews) – With June ushering in a wave of odes to LGBT “Pride” Month across traditional and social media from political, activist, and corporate voices, a Catholic priest’s video explaining why the celebration is incompatible with Christian principles drew a flurry of hate from left-wing voices, and a censorship action from video sharing platform TikTok.

On the first of the month, Fr. Simon Esshaki of St. Peter Chaldean Catholic Cathedral released a short video explaining that the faithful are called to love everyone, including those struggling with same-sex attraction, and part of that love means meeting sin with truth, not reinforcement.

Christians should not support #PrideMonth pic.twitter.com/ykGnykDsjK

“Christians should not participate in or support Pride Month,” he said. “And it’s not because we hate men and women with same-sex attraction. It’s because we know that according to the law of nature and the law of God, marriage should be between man and woman. The Catholic Church actually teaches that we should love all those with homosexual tendencies.”

Esshaki was referring to Paragraph 2358 of the Catechism of the Catholic Church, which states that homosexual tendencies are “objectively disordered,” and those afflicted by them “must be accepted with respect, compassion, and sensitivity” while being “called to fulfill God's will in their lives and, if they are Christians, to unite to the sacrifice of the Lord's Cross the difficulties they may encounter from their condition.”

“Just because you love somebody doesn’t mean you have to agree with them in every single action that they do,” Esshaki continued. “To love someone means to want what’s best for them, and it’s not best for someone that they are supported in their sinful actions, and it could be homosexual actions, it could be any other type of lustful actions, or any other type of sin. All sin is bad, and we are all sinners, we all struggle, but we all need the grace of God to be able to overcome our sins.”

The calm, respectful video was flooded with hostile reactions, ranging from replies accusing Esshaki “of hate” to people suggesting with no evidence that he himself was a closeted homosexual (a common trope among a certain subset of LGBT activists), even a since-deleted image that crudely pasted Esshaki’s photo into a gay chat app.

In addition, TikTok temporarily locked Esshaki out of his account, citing unspecified “Community Guideline violations.” Esshaki noted the website’s hypocrisy in doing so while allowing the posts attacking him to continue:

It’s very disappointing that TikTok allows videos of people defaming me and yet does not allow me to defend myself. @tiktok_us, please fix this. pic.twitter.com/5mCZawR4Ph

On June 4, Esshaki made a follow-up statement revealing that he had also received death threats for his stance, and explaining that he briefly deactivated his Twitter account in hopes of defusing the onslaught:

Esshaki concluded the message by reiterating Christ’s command to “Love your enemies and pray for those who persecute you,” which compelled him to “continue to love and pray for all the people” attacking him. “I encourage you all to do the same.”

TikTok, which is owned by the Chinese company ByteDance, is no stranger to censorship controversies. In January, it temporarily banned the account of pro-life group Live Action, and last year it temporarily suspended 17-year-old Feroza Aziz over a video discussing the Chinese government’s persecution of the country’s Uighur Muslim population.

For months, TikTok has also been a subject of ongoing privacy and even national security concerns, stemming from its ties to the Chinese regime. In December, a class-action lawsuit was filed against the company for allegedly harvesting user data in secret and sending it back to China.