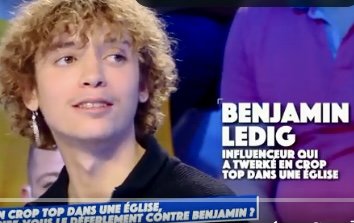 (LifeSiteNews) — Two young TikTok “influencers” shocked the faithful and unbelievers alike when they chose the Parisian church of Saint-Paul last week to shoot two sexually evocative videos that they later posted to the social media.

The video shows the two youths wearing crop tops, executing a lascivious dance and simulating homosexual activity in front of a large crucifix on a side altar. The dance video was seen millions of times and triggered many angry comments. The mainstream media are concentrating on the adverse reactions and giving priority to one of the youth who received threats on social media and was harassed over the telephone and at his parents’ residence after his personal information was shared on TikTok.

The church of Saint-Paul stands at the edge of the historic Marais district of Paris known for its “gay” population. Benjamin Ledig and “Queen Paul” walked into the church last Wednesday and, finding it empty and having drank and smoked illicit drugs (they say), decided to film themselves in obscene attitudes within the sacred building “just for a laugh,” with no intention of making their short films public.

Ledig said his own intention was to protest against the “homophobia” of the Church and of “all the people” who want to bring him back “to the straight and narrow.” He said this on one of France’s most popular chat shows, TPMP, where his blasphemous acts earned him an invitation on February 18, offering him a nationwide platform to plead his case. He added that before uploading the video he couldn’t know whether it would be seen 100 or one million times. “It was impossible to imagine the reaction we got,” he said, claiming he “didn’t want to hurt anybody.”

Contrary to “Queen Paul,” however, who apologized and took down the video of the most suggestive video, Ledig refused to say he was sorry and instead posted another one saying he did not see what he had done wrong. He stated that having been on TikTok for two years (promoting homosexuality), he often received comments that referred to the Church’s teachings in order to deplore his posts. “What I wanted to say is that I do not condone what the Church does: its homophobia, the fact that same-sex marriage is not accepted.”

After threats from angry viewers, Ledig commissioned two lawyers to lodge a complaint less than 24 hours after airing his obscene danse in a Catholic place of worship, asking for prosecution against the “hate speech” and “insults and death threats” against himself and his family. “The physical and mental integrity of Mr. Benjamin Ledig should not be further threatened,” according to a press statement widely publicized in the mainstream media.

TikTok took down the obnoxious video when it had reached 6 million views, but Ledig repeatedly opened new accounts and uploaded it again, accruing up to 20 million views. TikTok was unavailable for comment, according to Le Parisien, a national daily that devoted the lion’s share of its story to language in defense of the young “influencer.”

While some of the comments prompted by Ledig’s obscene profanation of a sacred place were very violent, the immense majority of the 60,000 or so reactions from Catholics, atheists, Muslims, Jews … that had piled up within 24 hours of the film going online condemned it for its “lack of respect,” underscoring that it is “a scandal to do such a thing in a church” and to use the Catholic Church to “make a buzz.”

The Archdiocese of Paris called on a bailiff in order to establish and record the facts and is now considering prosecution. However, its statement took on a purely legal tone, complaining that the youths had no permission to shoot a film in a place of worship but refraining from all moral judgment of the homosexual propaganda in which its author specializes.

“The Diocese of Paris regrets the unnecessary vulgarity of the video shot in the church of Saint-Paul-Saint-Louis, a place of prayer and peace, and broadcast on the social network TikTok.

“The parish priest of Saint-Paul-Saint-Louis has contacted the author of the video, which was filmed without authorization, asking him to remove it from his account within 24 hours.

“In any event, the parish priest of Saint-Paul-Saint-Louis will explore all legal possibilities to stop the infringement of his rights constituted by the recording and broadcasting of this video without prior express authorization.”

It is recalled that the parish priest in charge of each parish must give his express prior authorization for any photographic or audiovisual recording or broadcasting and may refuse his authorization for photo sessions or filming that he deems incompatible with the religious purpose of the building (law of 1905).”

The Archdiocese of Paris pointed out that churches are buildings assigned to Catholic worship at all times and in all their elements: no video or film may be shot there without the express authorization of the parish priest.”

“Unnecessary vulgarity” is something of an understatement in the context of a video showing two males with bared bellies “twerking” in front of an image of Our Lord. The archdiocese condemned the act but never gave the full reason for this condemnation, nor did it make clear to an obviously disorientated young man that the evil he is glorifying through profanation and blasphemy not only hurts the feelings of Catholics and right-minded people but is a grave offense to God and detrimental to his own good.

Father Pierre Vivarès, the parish priest, told the Catholic media outlet Aleteia that he had been inundated with messages on Thursday morning warning him about the film posted on TikTok by “two very young adults.” Calling the film a “kid’s prank,” Vivarès said he sent an email to Ledig asking him to take down the video.

“The question is not what this young man is doing but where he is doing it. Many people believe that a place of worship, because it is open to the public during the day, is a public place where you can do whatever you want. No place in France is a space of total freedom without any restraint: you can’t walk naked in the street for example, because that would be an attack on modesty, you can’t sell what you want where you want because there are commercial rules, say what you want about who you want because reputations must be protected and respected. All these rules are there to allow respect for each other and life in community. The reactions of the young people were not about the fact that he was twerking in a crop-top but about the place where he was doing it.”

If this is all a priest of the Roman Catholic Church can think of telling a Catholic media outlet, it is perhaps no wonder that young people such as Benjamin Ledig can’t understand where he went wrong.