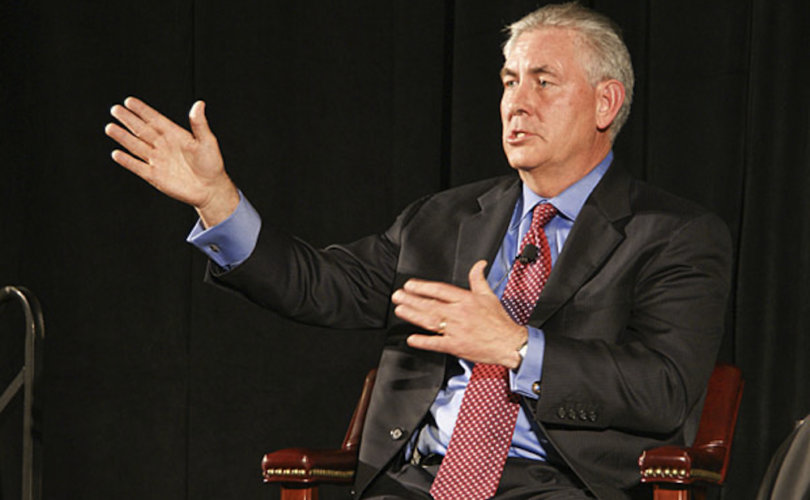 December 15, 2016 (LifeSiteNews) — Family Research Council President Tony Perkins slammed Rex Tillerson, President-elect Trump’s choice for Secretary of State, for his record at ExxonMobil of promoting homosexuality and abortion — and his role in opening up the Boy Scouts of America to homosexuals.

Perkins said Tillerson, if confirmed as America’s top diplomat, “may be the greatest ally liberals have in the Cabinet for their abortion and LGBT agendas.” He said Tillerson’s liberal social record at ExxonMobil “should be particularly alarming to conservatives who've spent the last eight years watching the State Department lead the global parade for the slaughter of innocent unborn children and the intimidation of nations with natural views on marriage and sexuality.”

Tillerson is receiving praise from moderate Republicans and established Trump-backers like conservative GOP leaders Newt Gingrich and Mike Huckabee, as well as from at least one staffer for the liberal D.C. think tank, the Brookings Institute.

In the far-flung “conservative” world in Washington, D.C. of groups and interests vying for attention over American foreign policy, those advocating for pro-family social values often get the short end of the stick. That explains why President Obama’s radical “transformation” of using American power and money abroad to reinvent homosexuality and transgenderism as “human rights” received little media attention during his eight years in office and during the presidential campaign.

In “conservative” foreign policy circles, too, there has been a paucity of criticism over Obama and Hillary Clinton’s “gay rights are human rights, and human rights are gay rights” formula outside of groups like FRC and the Center for Family and Human Rights (C-FAM).

All this increases the likelihood that aspects of Obama’s pro-LGBTQ foreign (and anti-pro-life) posturing will survive into the Trump presidency. The fact that many poorer nations like Jamaica and Kenya resent Obama for using American power to foist secular-left social values on their unwilling populations has done little to raise the profile of social issues — especially the LGBTQ agenda — in the D.C. foreign policy world.

“No sooner had Hillary Clinton taken over the State Department in 2009 than the White House ordered her to use the agency as a club to beat other nations into submission on sensitive culture issues — a tradition that successor John Kerry has been all too eager to continue,” he says.

“Now, after two terms of exporting radical social policy, Americans could finally see the light at the end of the Obama administration tunnel. To hear that Donald Trump may be appointing a man who not only led the charge to open the Boy Scouts to gay troop leaders but whose company directly gives to Planned Parenthood is upsetting at best.”

Perkins continues: “FRC knows Tillerson all too well, having worked for years to put the brakes on his reckless agenda for a scouting organization that was already dealing with staggering numbers of sexual abuse cases. Unfortunately, the BSA, under Tillerson, ultimately caved to the pressure of the far left, irreparably splitting the Scouts and destroying a proud and honorable American tradition.”

The FRC president faulted the ExxonMobil CEO for “sending dollars to an abortion business that has just been referred for criminal prosecution and risking the well-being of young boys under his charge in an attempt to placate radical homosexual activists.”

If Tillerson supported those policies, Perkins asked, “then who knows what sort of ‘diplomacy’ he would champion at DOS [Department of State]?”

I strongly endorse the President-elect’s selection of Rex Tillerson to be the next Secretary of State. He would bring to the position vast knowledge, experience and success in dealing with dozens of governments and leaders in every corner of the world. He is a person of great integrity whose only goal in office would be to protect and advance the interests of the United States. I know this Eagle Scout will be a global champion of the best values of our country.

The Gates comments on Tillerson’s integrity and his being an Eagle Scout may not move social conservatives — as the two men presided over the two-part “homosexualization” of the Boy Scouts of America beginning in 2013. Tillerson, as LifeSiteNews reported, as former National President of the BSA welcomed the Scouts’ dramatic shift allowing openly homosexual boy members in 2013. And two years later, Gates, as national president, used his influence to lift the Scouts’ ban on homosexual adult male Scoutmasters.

Pro-family advocates of the original, pro-“morally straight” BSA policy of not bending to the LGBT agenda — a position the Scouts won the right to hold in a 2000 Supreme Court victory — predicted that once the first pillar of disallowing openly homosexual youth fell, so would the second of allowing adult male homosexual Scoutmasters.

In May, an outgoing Gates defended his “difficult decision” to push for allowing homosexual Scoutmasters, calling it one that has the support of “the overwhelming preponderance of sponsoring institutions and volunteer leaders.” Critics noted that truth and transcendent, God-fearing morality are not dictated by polls.

Ironically, among the reasons Gates cited for going back on his pledge not to revisit the BSA’s newly-altered, pro-homosexual policy was the potential for more legal fights entangling the Scouts —  after the Scouts had already won their right not to allow homosexually-identified Scoutmasters.

Now, social conservatives like Perkins will be watching to see if Tillerson is carefully questioned at his Senate confirmation hearings on the pro-homosexual metamorphosis that he, Gates, and other corporate titans engineered at the Boy Scouts, an organization with a long history of Scoutmasters sexually abusing boys.

[Trump’s] selection of Rex Tillerson is another example of recruiting people of extraordinary skill and accomplishment. How refreshing to have people with real world success rather than simply rounding up some academics with big ideas but very small accomplishments. Think tank theorists are useful to design the craft, but to complete the mission, we need people who have actually flown the craft.

Huckabee has been a strong supporter of Trump since bowing out of the Republican presidential primary race after a poor showing in the Iowa caucuses. His daughter, Sarah Huckabee, is a senior adviser to President-elect Trump and worked on his campaign.

Social issues may not have been foremost in the minds of other conservative leaders and organizations that endorsed Tillerson’s selection. The statements by Heritage Foundation president Jim DeMint and Sen. Jim Inhofe (R-OK) did not mention them. Said DeMint in part:

Tillerson will confront an array of challenges, from the growing menace posed by ISIS and al-Qaeda, to a resurgent Russia that occupies parts of Europe and increasingly attempts to intimidate America's NATO partners. It is imperative that the new administration maintain the U.S. sanctions that are in place against Moscow in response to Russia's invasion of Crimea and its brutal proxy war in eastern Ukraine.

Tillerson must also deal with the grave dangers posed by Iran and its nuclear ambitions, the mounting aggression of the North Korean regime, and a China that is at once America's biggest trading partner and a potential adversary, all while working to rebuild alliances with some of our closest partners like Israel, the Baltic states and Japan. After eight years of “leading from behind,” America must once again lead from the front.

I am pleased by President-elect Trump’s announcement to nominate Rex Tillerson to be our Secretary of State. … I have known Rex for years and think he will be great for this position. He is an accomplished leader who has proven himself on the world stage as ExxonMobil’s CEO. His business acumen will provide a welcomed, fresh look at how the State Department conducts its business, and I am confident he will leverage our global leadership position to strengthen the United States and our allies around the world. I look forward to discussing my national security concerns with him and working closely with him in the coming years.

Former Republican presidential candidate and Christian conservative favorite Gary Bauer, who works in both the foreign policy and pro-family arenas, suggested that social issues will not be a big part of Tillerson’s job at the State Department should he be confirmed:

I don’t agree with Tillerson on everything. Not surprisingly, as the head of a multinational company, he has been against past U.S. sanctions efforts, and he isn’t great on social issues. But those issues won’t be in his portfolio. Going forward, Tillerson will have to adjust his views to conform with those of the Trump administration.

Meanwhile, Nate Madden cautioned conservatives against supporting Tillerson in an article in Conservative Review titled, “Why social conservatives should be deeply concerned about Rex Tillerson as Secretary of State.” Madden writes:

If Donald Trump would like to keep social conservatives around for support in 2020, one of the challenges his top diplomat will have to tackle is undoing the pro-abortion, anti-family mess Kerry and Clinton have made of the State Department.

While it’s highly unlikely that a Secretary Tillerson would approach his job with the same kind of radical leftist gusto seen in recent years, questions about his past with the Boy Scouts of America and ExxonMobil are legitimate. And they deserve answers.