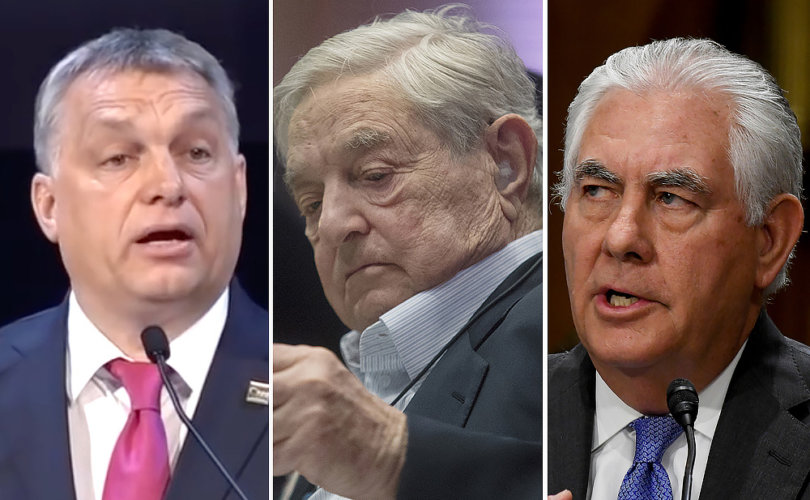 December 5, 2017 (LifeSiteNews) — The U.S. State Department’s $700,000 grant to Hungarian media before upcoming elections shocked the government in Budapest, prompting a diplomatic conflict between the NATO allies. The grant is seen by many as taking sides in a private war waged by the Hungarian-born, anti-Trump American billionaire George Soros against the popular conservative government of pro-Trump Prime Minister Viktor Orbán.

Orban has been fighting massive negative influence of Soros in Hungary through Soros’ financing of the Central European University and 60-plus other groups in the country. Orbán has called Soros a “large-bodied predator.”

LifeSiteNews previously reported that the Hungarian government called these Soros-backed groups “self-styled human rights organizations which engage in political activity but which have no political legitimacy, and whose activities are in sharp opposition to the views of the majority of Hungarians.”

DRL also states that it “typically focuses its work in countries with egregious human rights violations, where democracy and human rights advocates are under pressure and where governments are undemocratic or in transition.”

Hungary is a no longer behind the Iron Curtain, and has transformed into a democratic republic with a multi-party system. Those in Budapest saw the U.S. State Department's media grant as an unwanted interference in Hungary’s domestic affairs.

According to the U.S. State Department website, the grant is available for organizations operating outside the capital in Hungary which want to “increase citizens’ access to objective information about domestic and global issues.” The grant description also states, “Program activities could include training for journalists and editors,” which may suggest that in the eyes of the U.S. officials, Hungarian journalists lack professional skills to do their jobs.

The true purpose of the grant appears to align with George Soros’ assaults against Orbán’s nationalistic government and Hungary’s ruling right-wing Fidesz party.

The word “objective” is used five times in the grant description, but critics wonder who will give the U.S. State Department guidance in determining the organization which is supposed to disseminate “reliable and unbiased information.” Given George Soros’ cozy relationship with the U.S. State Department and his personal interest in toppling the Hungarian government, it is not difficult to guess.

RELATED: George Soros has been interfering in Hungary’s politics for years. Now, they’re fed up

U.S. efforts to influence Hungary’s media and challenge its government began before publication of the grant. These steps were taken by Chargé d’Affaires David Kostelancik from the U.S Embassy in Budapest. Kostelancik had come to Soros’ aid in an earlier dispute, when Budapest proposed a bill tightening regulations on universities from outside the European Union issuing diplomas in Hungary, which would affect Soros’ university. He expressed his opinions very strongly, saying that “the U.S. opposes any effort to compromise the operations or independence of the University.”

In October, Kostelancik decided to lecture the Hungarian Association of Journalists. His speech, entitled “Freedom of the Press: Enduring Values in a Dynamic Media Environment,” was ironic given that Kostelancik comes from a country which has its own problems with biased media outlets and “fake news.” Kostelancik spoke “about negative trends in the sphere of press freedom in Hungary,” media dealing with “pressure and intimidation,” and facing “challenges in the advertising market that the pro-government outlets do not.”

According to Hungary Today, Kostelancik was indirectly referring to controversial media acquisitions by Orbán allies. The article added that the U.S. diplomat was concerned about the “government-linked online tabloid 888.hu’s publication of the names of journalists,” who are considered George Soros’ “propagandists.”

Nonetheless, Kostelancik concluded in his speech, “There are still independent and opposition media outlets here that are able to practice journalism with broad editorial freedom.”

Such freedom would be necessary to ensure fair national elections next April and municipal elections in 2019. Soros' usual influence in politics and information dissemination has been aligned with radical leftist, globalist agendas and groups.

Kostelancik’s comments were not well received in Budapest. He was summoned by the Hungarian government, which called his actions “detrimental to bilateral relations and trust.”

The Prime Minister’s Office chief János Lázár commented that Kostelancik’s description of the Hungarian media environment was “a lot of nonsense.” He suggested that part of the problem is that not enough U.S. diplomats speak Hungarian. Lázár asserted, “if they spoke our language they would see that hundreds of articles criticizing the government are published daily.”

According to the Minister of Foreign Affairs/the Minister of State, Levente Magyar, “There are several problems with David Kostelancik’s speech. Firstly, nobody asked him to make a statement. Secondly, he had no moral or political mandate to do so. And thirdly, as a sovereign state, Hungary objects to any country interfering in its upcoming parliamentary elections in such a manner.”

And Kostelancik was again summoned for explanation.

This “uninvited interference in Hungarian internal politics” caused a sudden diplomatic crisis in otherwise good U.S.-Hungarian relations since Trump took office. Both countries’ leaders seem to have similar worldviews, especially on immigration. Orbán, an early supporter of Trump, has been fighting foreign interference in Hungary’s politics, especially by Soros’ organizations. The U.S. president also accused Soros, who sponsors the Democratic Party, “of being part of a ‘global power structure’ that has ‘robbed’ the working class.”

The Minister of State Magyar remarked that diplomats generally act according to orders, which would mean that the change in approach declared by the American President “has still not reached certain areas of the State Department.”