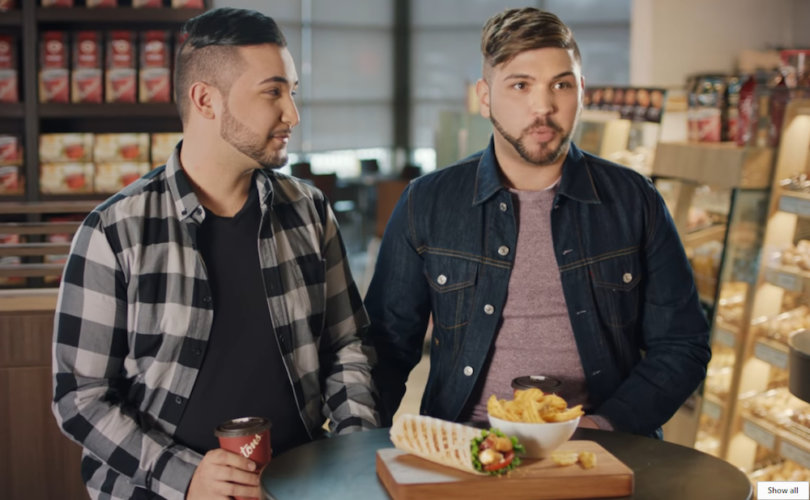 April 4, 2017 (LifeSiteNews) – Inclusiveness is the message in Tim Horton’s new “Perfect Pairings” commercial that links fast-food combos with cameos of friends and romantic couples, including one consisting of two young, male homosexuals.

“They are trying to normalize homosexuality,” said Gwen Landolt of the REAL Women of Canada. “But they aren’t normal. They amount to between one and two percent of the population the world over.”

The minute-long video came just a month after Coca-Cola won plaudits from the homosexual community in the U.S. for an ad featuring a brother and a sister vying for the attention of the new pool boy by offering him a cold Coke.

In Tim Horton’s ad, the most airtime goes to a middle-aged heterosexual couple who, thanks to meeting at Tim’s, have a “second chance” at romance. Then there are two sets of young female buddies. After that, there are two young men looking enough alike to be brothers, down to the haircuts and matching goatees, whose “first date was at Tim Horton’s.”

Tying them all together is fast food. “At Tim Horton’s,” says the voiceover, “perfect pairings are everywhere. Like the more than 100 delicious combinations we proudly serve to Canadians every day.”

Named after a popular NHL player of the 1960s and ‘70s, Tim Horton’s has long played up its status as Canada’s leading fast-food chain. It promotes local participation sports and family values and even established an outlet serving Canadian armed forces in Afghanistan.

However, in recent years, the chain has faced some criticism from gays. In 2009, a homosexual petition led the chain to back out of sponsoring a group promoting traditional marriage in the U.S. In 2011, local management had to apologize after ejecting a lesbian couple for necking in a small Ontario town outlet. A year later, there was a similar uproar when the company's WiFi briefly blocked a homosexual news site.

Now the chain is apparently equating being Canadian with sexual inclusion.

“They are trying to be politically correct,” Landolt told LifeSite. “They are saying homosexual relationships are like every other kind of relationship.”

To strengthen the argument, none of the romantic couples is evidently married. Certainly, none has been married for long.

“None of them have children,” said Landolt. “But people take their children to Tim Horton’s all the time. Married people go there all the time too.”