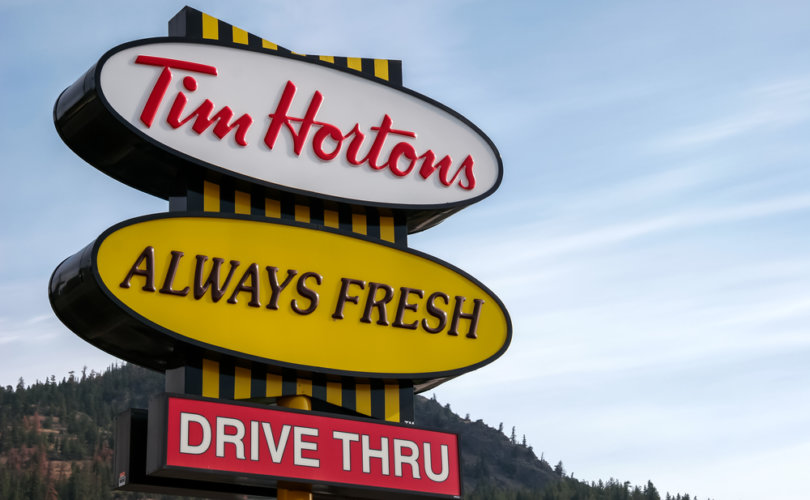 Typing in LifeSiteNews.com while using the coffee shop’s wifi only brought up an error message as recently as Tuesday. The message read: “Access Denied – Access to this page has been blocked due to inappropriate content.”

Exactly what it was that Tim Hortons considered to be “inappropriate content” was never specified.

Satanic and sexually-explicit photographs on other websites, though, remain readily accessible. The websites for the Satanic Temple and Xtra, which bills itself as Canada's queer news source, were easy to access using Tim Hortons' wifi service Monday.

The blocking of LifeSiteNews was first noticed by readers back in May this year. They tried accessing LifeSiteNews from Tim Hortons restaurants throughout the country, from Victoria on Canada's West Coast through to the Maritimes and including Calgary and Toronto.

Some of them complained to Tim Hortons, apparently with little effect – until LifeSiteNews decided to report on the blocking of its website this week.

“This morning I was eating at a Tim Horton restaurant in Toronto and was shocked to find out that LifeSiteNews.com was blocked by [the] Tim Horton server,” LifeSiteNews reader Raymond Yip wrote in an e-mail to Tim Hortons' management.

“Like Tim Hortons customers, [LifeSiteNews'] viewers are everyday citizens of the society, members of families. Their content [is] healthy and important for the well being of the society. It should not be blocked,” he wrote in the e-mail which was also sent to LifeSiteNews.

When contacted by LifeSiteNews, Tim Hortons spokespeople blamed an unnamed, third-party vendor that supplies its wifi service for the snafu. Early Tuesday afternoon, Tim Hortons stated that the LifeSiteNews website was no longer blocked.

“We have a third-party vendor that has parameters automatically set to filter websites,” said a company official who did not give his or her name. “The website you reference below has been cleared and should now be accessible. We are always reviewing the parameters and filters in place to ensure guest satisfaction.”

A quick check, though, revealed the LifeSiteNews website was still blocked as of 2:48 p.m. Eastern Time Tuesday. By Wednesday afternoon, though, it was back up, available to be accessed by Tim Hortons’ patrons.

Jojo Ruba, executive director of the Christian ministry Faith Beyond Belief, says Tim Hortons needs to ask questions of its supplier of wifi services and find out what kind of software and filters are being used to screen out websites.

“Sites like Facebook and Twitter are not neutral. We know that,” said Ruba. “And we should know if it's happening at our favourite restaurants. Canadians have a right to know if these are going to filter out things … if there is an agenda or a plan.”

Despite its blocking of LifeSiteNews earlier this year, Tim Hortons' wifi service does let through conservative news websites such as the Breitbart News Network and The Daily Wire.

Several other pro-life websites are also accessible through the Tim Hortons wifi service, including The Canadian Centre for Bio-Ethical Reform's website with its abortion victim photography, the website for Toronto Right to Life Association, and the pro-life Wilberforce Project website.

But some pro-life websites have been blocked by Tim Hortons' wifi service. These include Birthright, a pro-life, non-profit that helps women facing unplanned pregnancies, and ProLife.com.

When the url for Campaign Life Coalition's website was plugged into the Google Chrome search engine in a Tim Hortons, an error message repeatedly claimed the website took too long to respond to load properly. And yet, even websites for businesses as far away and remote as Rankin Inlet in the Canadian territory of Nunavut and Rivers State in the African country of Nigeria came through immediately.