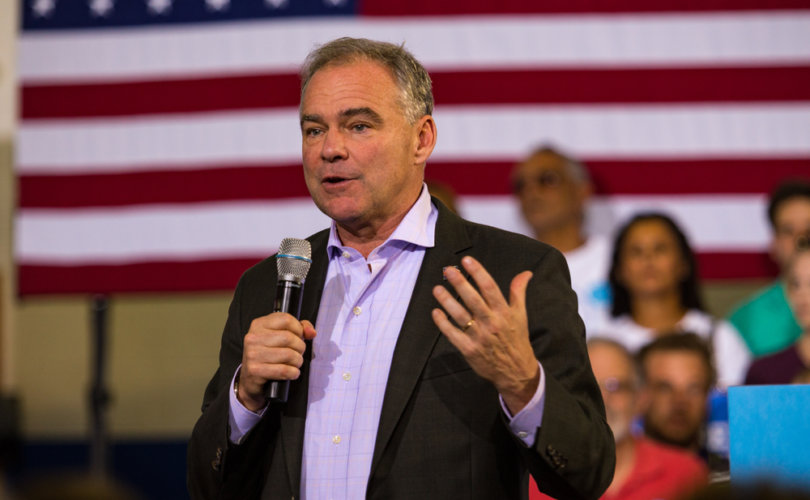 FARMVILLE, VA, October 5, 2016 (LifeSiteNews) – When asked if he had ever struggled with his conscience over a public policy position that conflicts with his faith, Senator Tim Kaine said the choice was “easy”: his faith-based opposition, not to abortion-on-demand, but to the death penalty for criminals.

“Can you discuss in detail a time when you struggled to balance your personal faith and a public policy position? Senator Kaine?” moderator Elaine Quijano of CBS News asked the vice presidential candidates during last night’s debate.

“Yeah, that's an easy one for me,” Kaine, Hillary Clinton’s Democratic vice presidential candidate, replied. “For me, the hardest struggle in my faith life was the Catholic Church is against the death penalty and so am I. But I was governor of a state, and the state law said that there was a death penalty for [serious] crimes.”

“So, I had to grapple with that,” he said. “It was very, very difficult to allow executions to go forward, but in circumstances where I didn't feel like there was a case for clemency, I told Virginia voters I would uphold the law, and I did.”

The Roman Catholic Church does not officially oppose the death penalty in every circumstance. The most influential theological work in Catholic history, Thomas Aquinas’ Summa Theologica, approved of capital punishment. The Catechism of the Catholic Church says, “The traditional teaching of the Church does not exclude recourse to the death penalty, if this is the only possible way of effectively defending human lives against the unjust aggressor,” while endorsing less extreme punishment in most cases.

Kaine, a U.S. senator and former governor of Virginia, did not mention abortion-on-demand, which the undivided Christian Church has opposed since apostolic times.

“I find it odd that a man of faith who says he struggled with allowing the death penalty because of his faith, is also pro-abortion,” said Penny Nance, president of Concerned Women for America. “He seems to have no qualms about losing the lives of the most vulnerable and unprotected in our society, the unborn.”

The senator had previously cited his deep faith, beginning with his “Irish Catholic parents,” who were in attendance, his education by Jesuits, his mission trip to Honduras.

“I try to practice my religion in a very devout way and follow the teachings of my church in my own personal life,” he said.

He added that “Hillary and I are both people out of religious backgrounds,” adding that Clinton had “a Methodist church experience, which was really formative for her as a public servant.”

Clinton has said the Bible is “the biggest influence on my thinking.” She also said that “religious beliefs” that oppose abortion “have to be changed.”

“Tim Kaine has proven himself to be an even match for Hillary Clinton,” Nance said.