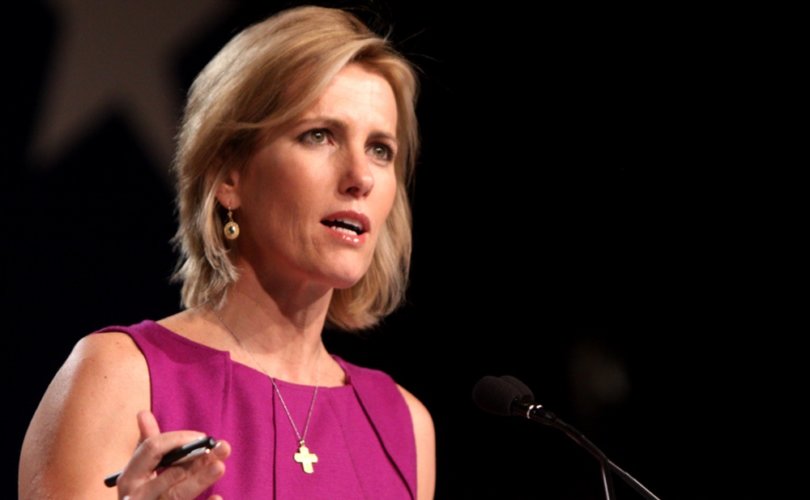 NEW YORK, August 27, 2018 (LifeSiteNews) – A leading conservative news host has called for Pope Francis to resign and expressed support for the Vatican whistleblower who says the pontiff knowingly made sexual predator and now ex-Cardinal McCarrick his trusted advisor.

Laura Ingraham, host of both “The Ingraham Angle” and “The Ingraham Show,” posted a message on Twitter yesterday saying that Pope Francis’s remarks in Ireland about clerical sexual abuse were insufficient.

“Too little, too late from Pope Francis in Ireland,” she tweeted “I stand with Archbishop Carlo Vigano. Time for the laity to demand a new Shepherd.”

Too little, too late from Pope Francis in Ireland—I stand with Archbishop Carlo Vigano. Time for the laity to demand a new Shepherd. https://t.co/1fyTI6mTix

Ingraham’s comment was superimposed over a BBC News report that Pope Francis had asked for “firm and decisive” action to “secure truth and justice” for clerical sex abuse victims during his visit to the shrine at Knock in Ireland.

Former Papal Nuncio to the United States Archbishop Carlo Viganò released a letter August 22 detailing how Pope Francis returned then-Cardinal McCarrick to a prominent role in the Church after Pope Benedict had him sidelined. The letter was published by LifeSiteNews on Saturday.

Ingraham also tweeted several passages from Viganò’s statement and concluded that he had done the Church a service.

“Archbishop Vigano has done right by the Catholic flock and the victims of this evil predation committed, tolerated and hidden by the Church hierarchy,” she wrote

According to Viganò, McCarrick was forbidden to exercise a public ministry after reports of his active homosexuality reached Pope Benedict. Soon after Francis was elected, however, McCarrick was promoted to a position of influence as Francis’ counsellor in American Church affairs. Viganò stated that Pope Francis asked him what he thought of Cardinal McCarrick, and the Nuncio had apprised him of McCarrick’s stained reputation.

The retired archbishop went onto say that Cardinal Donald Wuerl of Washington D.C. is lying when he says he didn’t know of McCarricks’ sexual predation.

“His recent statements that he knew nothing about it, even though at first he cunningly referred to compensation for the two victims, are absolutely laughable,” he wrote. “The Cardinal lies shamelessly and prevails upon his Chancellor, Monsignor Antonicelli, to lie as well.”

Viganò also alleges that McCarrick, with Cardinals Maradiaga and Wuerl, orchestrated the promotions of Blase Cupich, now Cardinal Archbishop of Chicago, and Joseph Tobin, now Cardinal Archbishop of Newark, New Jersey. He stated also, however, that Pope Francis had told him at their first meeting that American bishops “must not be ideologized”, neither “right-wing like the Archbishop of Philadelphia [Charles J. Chaput]” nor “left-wing…and when I say left-wing”–the Pope apparently explained– “I mean homosexual.”

Carol Maria Viganò was appointed the Vatican’s Secretary General by Pope Benedict in 2009 but demoted after letters he wrote to the pontiff describing Vatican corruption were published during the 2012 Vatileaks Scandal. He was banished to the USA to serve as Apostolic Nuncio. Viganò submitted his resignation on his 75th birthday, as is the custom for bishops, in 2016, and it was immediately accepted by Pope Francis.

Ingraham is herself a Roman Catholic laywoman and described her conversion to the faith in her book Power to the People. She has appeared as a frequent guest on the Eternal Word Television Network (EWTN).

A former official in the Nunciate, Monsignor Jean-François Lantheaume, and Bishop Joseph Strickland of Tyler, Texas are among others who have expressed support for Archbishop Viganò.