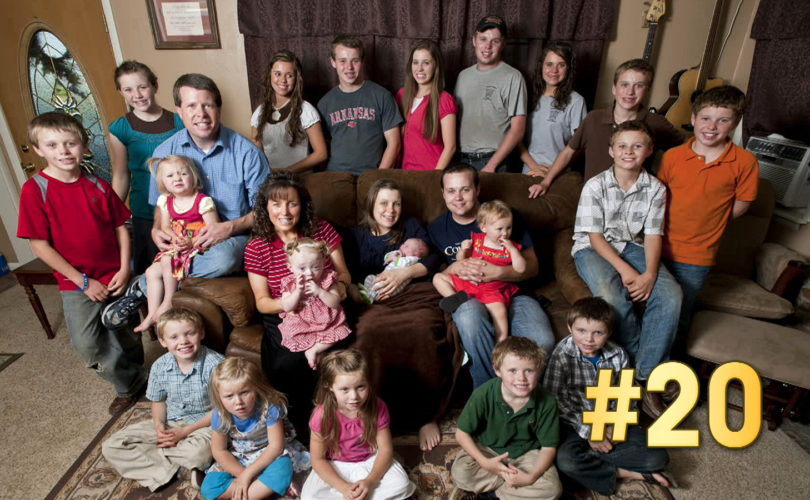 SPRINGDALE, AR, May 22, 2015 (LifeSiteNews.com) – The television network TLC has removed the Duggar family's reality show, “19 Kids and Counting,” from its schedule, at least temporarily.

Multiple news outlets have confirmed that the show, featuring the large and expanding evangelical Christian family, will not be on the air until the network makes a final decision about the program's fate.

The network had previously removed “Here Comes Honey Boo Boo” from its network after “Mama June” Shannon had been seen associating with convicted child molester Mark McDaniel, possibly exposing her children to a sexual predator. Shannon has told the entertainment news outlet TMZ that she would sue the network for unfair and inconsistent treatment.

TLC has not made a final determination as of yet and aired a Duggar marathon Thursday evening as the controversy brewed.

Friday's move comes after media outlets obtained police records showing Josh Duggar, as a young teenager 12 years ago, inappropriately touched as many as five girls, often while they were sleeping. The police records show the incidents began in March 2002, the month the oldest Duggar child turned 14. He admitted the incident to his parents that July, but another incident took place in March 2003. At that time, the family sent him to a program that required counseling and hard physical labor.

Three years later, a letter containing details of the molestation was found, and its recipient notified police, who launched an investigation.

One of his victims told police, after Josh returned in July 2003, he had clearly “turned back to God.” No further incidents have been alleged.

Duggar's wife of six-and-a-half years, Anna, said Josh revealed the painful episode to her two years before they got engaged.

Since the allegations have been made public, Josh Duggar admitted his long ago wrongdoing, calling his teenage actions “inexcusable.” He also resigned his job at FRC Action, a pro-family lobbying organization.

Some figures have offered the Duggars their reassurance that, whatever sins Josh committed as a teen, he can be – perhaps has been – forgiven by God.

Former Arkansas Gov. Mike Huckabee, now a presidential hopeful, said that Josh “and his family dealt with it and were honest and open about it with the victims and the authorities. No purpose whatsoever is served by those who are now trying to discredit Josh or his family by sensationalizing the story.”

He said those who leaked the story were motivated by “insensitive bloodlust” to destroy the Duggar family. “There was no consideration of the fact that the victims wanted this to be left in the past, and ultimately a judge had the information on file destroyed—not to protect Josh, but the innocent victims.”

“In my life today, I am so very thankful for God’s grace, mercy and redemption,” Josh wrote.

Mike Huckabee affirms his support for Duggar family amid firestorm