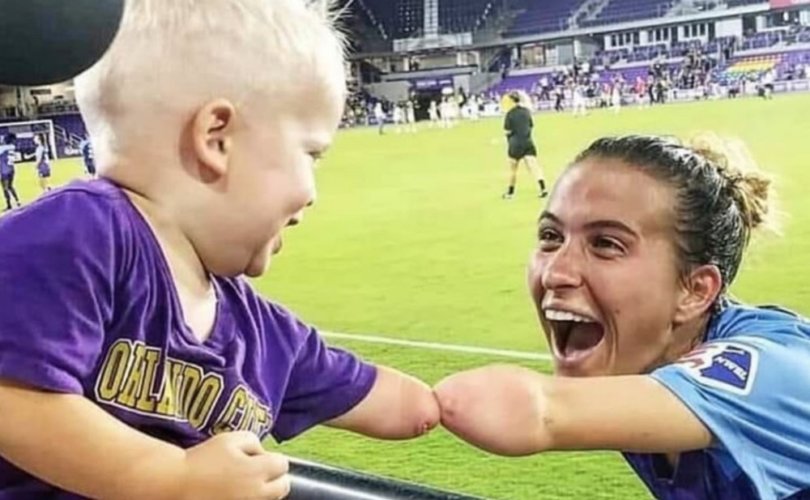 A toddler from Florida expressed sheer joy encountering his new friend who is just like him. The faces of 21-month-old Joseph Tidd and professional soccer player Carson Pickett — both born without a left forearm — register delight as they “fist bump” after Carson’s game.

No caption. No story. Just a moment worth sharing. (@tiddbit_outta_hand x @carson.pickett)

Joseph’s mom, Colleen Tidd, snapped the photo, which quickly went viral on Instagram and has exploded all over all social media.

The “instant bond we can’t begin to understand”

“Carson knelt down next to Joseph and showed him her arm,” Joseph’s dad, Miles Tidd, told TODAY Parents. “It was this instant bond we can’t begin to understand.”

The now viral picture of the two clearly displays their special bond.

Pickett, for her part, said the feeling was mutual.

“I know I might be seen as his role model, but he’s also mine,” Pickett told USA Today Sports. “It’s just a gift to feel so much emotion from a little boy who understands you in a way other people can’t.”

“Literally within five minutes of me meeting him, we had an instant bond,” said Pickett. “It’s interesting, though, because for a kid that young, I didn’t expect him to connect the way he did. Even though we both have the same arm (birth defect), it was amazing to me that it felt like he realized why we were bonded.”

“Honestly the best part of the photo is that it was so real and wasn’t planned,” said  Pickett. “It was the true pure reaction we both had.”

“Pictures mean a lot so hopefully when he gets older he can see that and feel even more of what it means,” continued Pickett. “When I was younger and I didn't know how the world works, it was hard. My parents always tell me that God put me here for a reason. The biggest thing I’d want Joseph (and others) to know is that even if people see you as different, it’s what’s in your heart that counts.”

“Carson believes she can do anything,” said his dad, Miles, “and that is the mindset we want Joseph to have as well.”

“Football, basketball, baseball, soccer, he does it all,” mom Colleen told TODAY Parents. “He maneuvers his arm a little bit differently, but he makes it work.”

1
A legacy of scandal: Pope Francis says he has ‘carried out’ plans laid during ‘pre-Conclave meetings’
2
Abp. Viganò: ‘Pride’ movement is satanic, must be conquered by ‘reparation,’ charity
3
Dr. Jordan Peterson bends the knee to homosexual ‘marriage’ and parenting in interview with Dave Rubin
4
Mass hypnosis: why can’t people see through the COVID deception?
5
Dr. Vladimir Zelenko was a true hero and patriot who saved many lives with his COVID treatment
Subscribe to Daily Headlines »