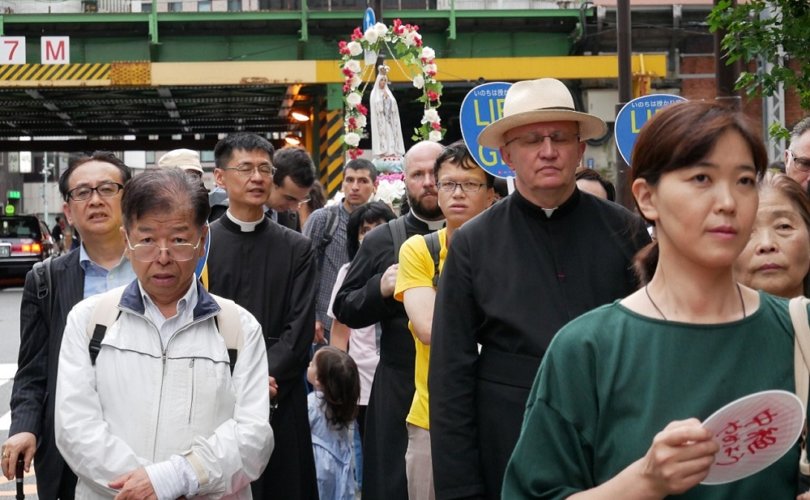 The annual pro-life march was held on Monday, July 15, which is Marine Day (one of Japan's public holidays). Though the number of marchers was a modest 300, there were two bishops and several priests who also joined the march, praying for a culture of life in Japan and around the world.

Dr. Ligaya Acosta from the Philippines, who is the Asia-Oceania regional director of Human Life International (HLI), and Sr. Fidelis of St. Gianna Prolife Center, along with other sisters from Taiwan, also joined the march, as did Joe Woodard, director of Asia for Life.

At the end of the procession, 50 to 60 people were praying the Holy Rosary in the company of a statue of Our Lady of Fatima. These prayerful witnesses were convinced that abortion, homosexuality, euthanasia, and so on are the result of a spirit of revolt against God, a spirit of sin, the very spirit of Satan. The spirit of license and individualism is nothing else but the spirit of revolution, of hatred against God. By scorning human life, which is a gift from God, man wants to dethrone God and to be enthroned in God's place. Humanism without God leads inevitably to the death of man.

The entire human society is now pushed to the culture of death and to societal suicide. By comparison, humanly speaking, the scale of the March in Tokyo is ridiculously small. However, this march is not a political demonstration, but rather a supernatural act of profession of faith. God alone is the author of human life. God is Life itself. This Life became man and said: I am the way, the truth, and the LIFE. The Divine Word Who became man respected human lives, such as by curing the sick and bringing the dead back to life.

Those who mock the life of the innocent fetus mock the work of Jesus Christ and therefore of God Himself. They scorn the lives of the weak, the sick, the handicapped, and the aged as a burden. Look how Vincent Lambert was condemned!

Our Lady showed a vision of hell to three shepherds in Fatima in 1917. The children saw so many souls falling into hell like snow in winter. In 2019, through the culture of death and its works, innumerous souls are falling down into the eternal fire of hell, right now.

Thus, the most important action for the marchers for life was prayer, especially the holy rosary. They prayed while carrying aloft Our Lady publicly in such a way that they proclaimed their unity of purpose and their belonging to the LIFE, Jesus Christ. They walked for the highest life, the supernatural life within us.

“In him was life, and the life was the light of men. And the light shineth in darkness, and the darkness did not comprehend it.” (John 1:4-5)

Our Lady of Fatima, pray for us!

Our Lady of Akita, pray for us!