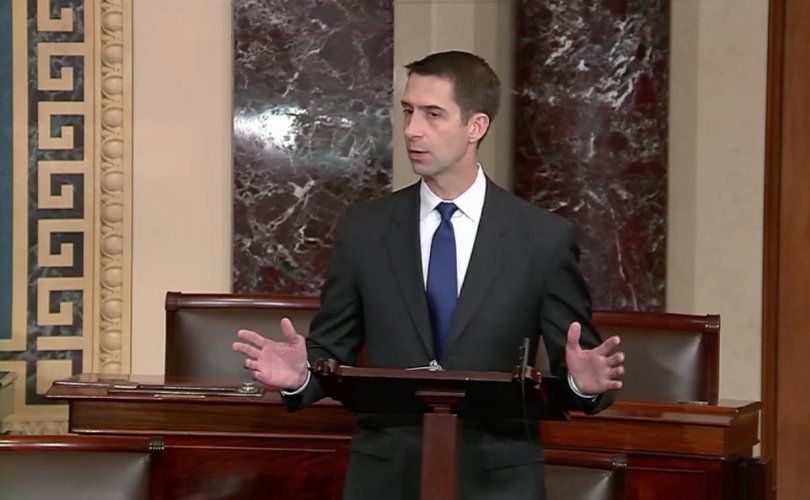 WASHINGTON, D.C., March 6, 2020 (LifeSiteNews) – As squabbling continues over Senate Minority Leader Chuck Schumer’s ominous warning to Supreme Court justices that they will “pay the price” if they rule in favor of a pro-life law, Republican Sen. Tom Cotton of Arkansas suggested that those condemning Schumer for “threatening” Justices Neil Gorsuch and Brett Kavanaugh should devote greater focus on the “depraved” cause for which he made the threat in the first place.

During a pro-abortion rally outside the Supreme Court, Schumer warned Gorsuch and Kavanaugh by name: “You have released the whirlwind, and you will pay the price! You won’t know what hit you if you go forward with these awful decisions.”

Speaking to Fox News on Thursday, Sen. Cotton suggested the most important issue was not what kind of “whirlwind” Schumer had in mind, but the outcome he was demanding from the Supreme Court and the broader abortion-on-demand movement he represents.

Good to hear Senator Schumer regret his threats against SCOTUS. But the real issue at stake here is the Democrats' support for abortion.

“Let’s get to the root of the issue here: Chuck Schumer and the Democrats filibustered legislation that would prevent infanticide of a young baby that survives an abortion, prevent late-term abortion of infants that can feel pain in their mother’s womb,” Cotton said. “These are depraved practices that no civilized society should permit, yet, the Democrats are so radical on abortion that they’d filibuster those bills in lockstep. That’s the real issue at stake here.”

As for Schumer’s words, Cotton said it would be “better if he would just flatly apologize and move on with serious business, like, perhaps, trying to protect the lives of the unborn and protect women from very dangerous medical circumstances.”

Oral arguments began Wednesday over Louisiana’s requirement that abortion centers make arrangements for admitting women to nearby hospitals in cases of life-threatening complications. The abortion industry’s attorneys argue the law is no different from the Texas law the Supreme Court struck down in 2016’s Whole Woman’s Health v. Hellerstedt; pro-lifers argue that Hellerstedt was not only wrongly decided but inapplicable to Louisiana’s situation.

Schumer’s statement received stinging rebukes from President Donald Trump, Chief Justice John Roberts, Senate Majority Leader Mitch McConnell, and more, with calls for Schumer to be censured or resign. The Democrat leader first tried to claim he was referring to Republican lawmakers rather than the judges he named, and then admitted his choice of words “didn't come out the way I intended to.” He insisted he was referring only to political consequences rather than physical harm, and that “strong language” was warranted by the so-called threat to “women’s rights.”

The Louisiana case is likely to at the very least impact the Hellerstedt precedent, which has been used to invalidate a broad range of modest abortion regulations as “undue burdens” on women. It remains to be seen whether the court takes the opportunity to make a broader determination on the underlying legitimacy of Roe v. Wade or Planned Parenthood v. Casey, which force all 50 states to permit most abortions. In January, more than 200 members of Congress signed a brief urging the court to use the case as an occasion to reconsider Roe.

Roe is largely defended not on its legal merits (numerous pro-abortion legal minds, including Justice Ruth Bader Ginsburg herself, have acknowledged the ruling’s flaws), but on its status as precedent, with the contemporary interpretation of the stare decisis doctrine holding that Roe’s lengthy history staying on the books grants it added weight. Justice Clarence Thomas has forcefully rejected such arguments; it remains to be seen how Roberts or President Trump’s two SCOTUS appointees, Kavanaugh and Neil Gorsuch, will weigh Roe’s precedent versus its substance.