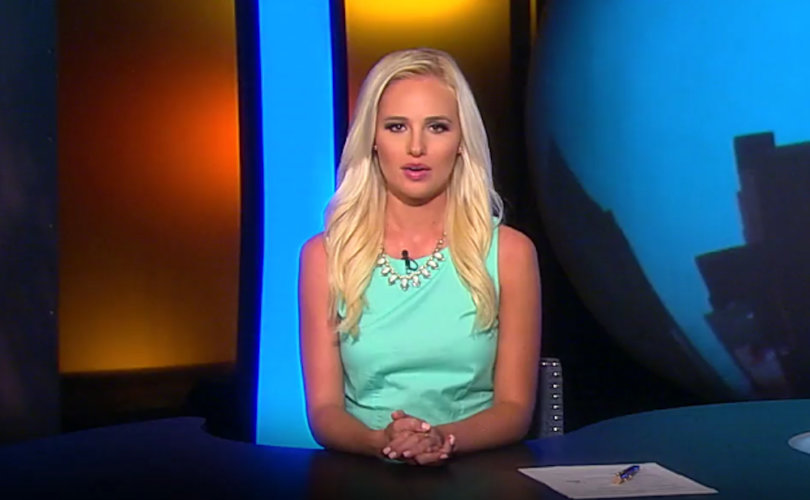 April 11, 2017 (LifeSiteNews) — Millennial conservative firebrand and Blaze TV host Tomi Lahren has filed a civil lawsuit against her boss, Glenn Beck, after he suspended her for implying that conservative pro-lifers are “hypocrites” as she flip-flopped on abortion.

Lahren, a rising star on the Right at age 24, filed a wrongful firing lawsuit against Beck and The Blaze in Dallas County on Friday. She charges them with “unlawful conduct” even though Lahren’s Blaze contract stipulates that any action that “brings [an employee] into public disrespect, offends the community … or embarrasses or reflects unfavorably on [The Blaze’s] reputation” is grounds for termination.

On March 17, Lahren offended millions of pro-life conservatives in her debut guest appearance on ABC’s “The View,” by saying “I’m pro-choice, and here’s why: I can’t sit here and be a hypocrite and say I’m for limited government but I think that the government should decide what women should do with their bodies.

“I can sit here and say that, as a Republican and I can say, you know what, I’m for limited government, so stay out of my guns, and you can stay out of my body as well,” she told The View co-hosts.

Lahren has been heavily criticized for suddenly embracing “Planned Parenthood” rhetoric. In past commentaries, she had discussed abortion using the word “murder” and railed against feminists for so readily supporting “baby-killing” through on-demand abortion.

“Tomi, who has repeatedly blasted liberals for believing that the unborn have no rights, has now decided that actually the unborn really don’t have any rights, and anyone who believes otherwise (anyone who believes as she professed to believe about 14 seconds ago) is a hypocrite and a hater,” said fellow Blaze host Matt Walsh in a March 20 Blaze column titled “Pro-lifers aren’t the ones being hypocrites, Tomi.”

Even feminist writers, while applauding Lahren, noted that just three months ago she was ripping on “pro-choicers” who claim to want abortions to be rare yet sound like “straight-up baby killers,” citing actress “Lena freakin' Dunham out there wishing she could have murdered a fetus.” (Dunham said she wishes she’d had an abortion, and then apologized for saying it.)

Lahren’s “pro-choice” comments, flouting decades of principled advocacy by social conservatives on behalf of the defenseless unborn, will end her career at The Blaze, the Texas-based, conservative media corporation founded by Beck. She is permanently banned from The Blaze’s various media platforms, the New York Post reported March 26.

“The lawsuit is a bitter end to Lahren’s meteoric career at The Blaze, which hired her as a 22-year-old recent college graduate and made her a star by giving her her own TV show in November 2015,” the conservative BizPackReview reported Saturday.

“If Lahren had expressed the conservative view accurately and stated why she disagreed, without moronically bashing pro-life conservatives as hypocrites, I doubt this would be a big deal,” wrote Amanda Presitigiacomo in the conservative Daily Wire under the headline, “WATCH: Tomi Lahren explains why she’s pro-abortion, proves she’s clueless about conservatism.”

According to Lahren’s lawsuit, The Blaze suspended her “indefinitely” a few days after her appearance on The View. She was told “she need not return to [The Blaze’s] office(s), all because of her pro-choice opinions expressed on The View. Plaintiff was understandably disappointed, saddened, and in shock for being suspended for freely expressing her opinions,” she states in the filing.

Lahren’s contract with The Blaze expires in September. She was already in trouble there before The View appearance, according to the conservative Daily Caller. “Lahren’s inflammatory style placed her at odds with other employees at The Blaze. … Tensions were high between Lahren and her co-workers at The Blaze even before she called pro-life conservatives hypocrites.”

On March 20, Beck, who himself has alienated conservatives at times, did a special radio segment on the Lahren controversy. He said that being pro-life is not a condition for employment at The Blaze, but that he took issue with Lahren's characterization of pro-life conservatism as hypocritical.

Beck gave Lahren a tutorial of sorts on abortion and the Constitution, ripping into the shallowness of her newfound, liberal talking points on abortion:

“I would disagree that you’re a hypocrite if you want limited government and yet you want the government to protect life of the unborn. It’s very, very clear,” said Beck. “But it takes intellectual honesty, and it takes a willingness to actually think these things through and to do more than just read Twitter or Facebook to get your news and your political opinions. You actually have to study things — these things out in your mind. Especially at a time period like today.”

While feminists and The View co-hosts welcomed Lahren’s “pro-choice” remarks, she has been pilloried on social media for her flip-flop on abortion and backhanded insult of pro-life conservatives. They believe the government has a duty despite Roe v. Wade to protect unborn innocents from being dismembered or gassed to death through legalized abortion-on-demand.

After her about-face on abortion, Lahren didn’t help her case with Beck or pro-lifers by defiantly tweeting out messages casting herself as a victim and libertarian “moderate” for telling her brand of “truth.”

Her putdown of pro-life conservatism “sparked a backlash from her co-workers,” Daily Caller reported. After Lahren’s March 18 tweet saying, “I speak my truth. If you don’t like it, tough. I will always be honest and stand in my truth,” fellow Blaze employee and reporter Kate Scanlon tweeted in response, “There is no ‘my truth.’ There is only the truth.”

In another tweet published April 7, the date Lahren filed her suit against Beck, she said: “Lay down and play dead really isn’t my style. #FinalThoughts.” Hundreds replied on Twitter, with far more agreeing with Beck than with her.

“Pro Abortion, suing your previous employer … this is the perfect starter guide to becoming a liberal,” tweeted “Ryan” in response.

“Your employer was squarely within his rights to fire u. U sold out & don't like the consequences. The rules apply to you, too,” tweeted Rosemary Borzell.

Some called Lahren a “snowflake” for going so far as to sue Beck. That is a term used often by Lahren and other conservatives to poke fun at easily offended, liberal millennials.

A popular tweet by “The Reagan Battalion” said: “Only 3 months ago, @TomiLahren considered an abortion to be murder, today, she branded pro-life conservatives as hypocrites. #NoPrinciples.”