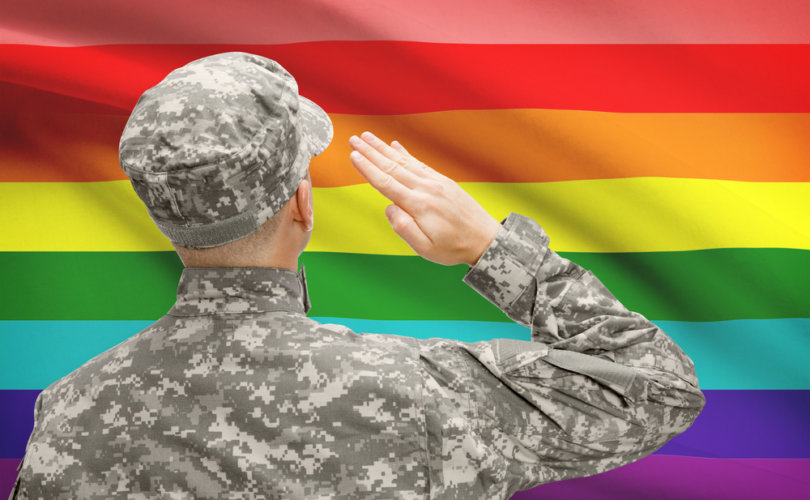 May 25, 2017 (LifeSiteNews) — The U.S. Army Surgeon General and Commanding General of the Army Medical Command has sent out a memo urging “each member of the Army Medical Team” to celebrate “Lesbian, Gay, Bisexual and Transgender Pride Month” in June.

The “unclassified” memo, a copy of which was obtained by LifeSiteNews from an anonymous source who works within Army Medical Command, was sent out Wednesday morning by Army Surgeon General Lt. Gen. Nadja West and Command Sergeant Major Gerald C. Ecker.

“Throughout history, brave LGBT Soldiers, Sailors, Airmen, Marines and Coast Guardsmen have served and fought for our Nation. Their readiness and willingness to serve have made our military stronger and our Nation safer,” the DoD memo states. “We continue to take great pride in all that our LGBT men and women contribute to Army Medicine and our mission.”

The memo continues the Obama policy of praising the 1969 homosexual anti-police riots at a “gay bar” in New York City (the Stonewall Inn), ostensibly as part of America’s noble civil rights history.

“Pride Month commemorates the events of June 1969 in New York known as the Stonewall riots, which are largely regarded as the beginning of the LGBT rights movement, and works to achieve equal justice and equal opportunity for LGBT Americans,” it states.

But conservative critics like John Lofton have noted the violent, viciously anti-cop nature of the “gay” Stonewall riots, including one protester who “verbally threatened to rape a male cop.” Citing a homosexual-authored book on Stonewall, Lofton writes that the bar, designated by Obama in 2016 as America’s first LGBTQ “National Monument,” “was full of male whores and drugged and drunken ‘drag queens’ (men wearing women’s clothes).”

Lt. Gen. West’s and Sergeant Major Ecker’s memo states: “During LGBT Pride Month, we celebrate our Nation’s rich diversity and renew our enduring commitment to equality. Our Nation was founded on the principle that the individual has infinite dignity and worth … Diversity is more than race, gender and ethnicity — it means diversity of thought, ability, background, language, culture and skill.”

Conservatives disillusioned – no change yet under Trump

The Army Medical Command employee who supplied LifeSiteNews with the DoD “pride” memo said, “I find it hard to believe that medical personnel would send something like this out. I really need to retire from this job, especially when medical personnel who know better ask me to celebrate this unhealthy lifestyle.”

The source said there are “more than a few people” working at the Medical Command who are upset at the contents of the “gay pride” memo.

A retired Army chaplain who fights to preserve biblical morality and religious freedom in the military said that, regrettably, he is not surprised that the Army is still issuing calls to celebrate “LGBT pride” under Trump.

“There will be a number of DoD [Department of Defense] agencies that will issue ‘pride’ statements like this,” Col. Ron Crews, executive director of the Chaplain Alliance for Religious Liberty, told LifeSiteNews. “I will be pleasantly surprised if that’s not the case.”

Col. Crews said he and other chaplains and Christians in the military “had great hopes” that the pro-LGBT culture in the Armed Forces would change under Trump and his Defense Secretary, former Marine Corps General James “Mad Dog” Mattis, “but so far we have not seen what we hoped would happen.”

Noting that there have been some reversals of Obama’s LGBT agenda in other agencies, such as Education, under Trump, Crews said, “So far I have not seen any changes from this administration” on LGBT issues in the military. He said he could not predict if, under the new, Republican Commander-in-Chief, the DoD will hold a big, pro-LGBT pride month ceremony at the Pentagon like it did under Obama.

A big part of the problem, he said, is that Trump has gotten so few of his major DoD appointments in place more than four months into his presidency. That leaves Obama holdovers to set policy.

Trump’s second nominee to be Secretary of the Army, Dr. Mark Green, a committed Christian, bowed out under an intense LGBT pressure campaign that distorted his past comments and targeted him for, among other things, opposing the LGBT agenda as a state senator in Tennessee.

Dr. Michelle Cretella, founder and president of the American College of Pediatricians, criticized the DoD’s ongoing homosexual-bisexual-transgender celebration under Trump.

“The military is celebrating and promoting unhealthy lifestyles that are associated with a host of physical and psychological disorders; disorders that are directly due to individual behaviors, not due to minority stress,” Dr. Cretella told LifeSiteNews. “Some friends in the military have told me that the increased promotion of 'LGBT pride' is eroding morale. This is an obvious danger to our military strength and readiness on multiple levels.”

Another social conservative said he is disappointed but not surprised that “LGBT Pride” celebrations are continuing under Commander-in-Chief Trump.

“Over the years, Donald Trump gave money to GLSEN [Gay, Lesbian and Straight Education Network] and who knows what other homosexual groups. He pandered to ‘gay’ activists, and ran a pro-LGBT presidential campaign. He’s appointed pro-LGBT officials. So those of us who voted for Trump or supported him should not be surprised that he continues to allow their agenda to freely permeate the military and everywhere else,” Brian Camenker, president of Mass Resistance, told LifeSiteNews.

Camenker pointed to Mass Resistance’s new, 600-page book, The Health Hazards of Homosexuality: What the Medical and Psychological Research Reveals, as “telling you all you need to know about this deadly lifestyle.”

“But the U.S. Army Medicine Team purposefully ignores all that. It’s lunacy,” he said. “The Army is in far worse shape than anyone imagined.”

Recently, LifeSiteNews reported on a CDC (Centers for Disease Control and Prevention) finding that more than 9 in 10 new HIV cases among young men and boys (ages 13 to 24) in the U.S. occur among homosexuals and bisexuals.