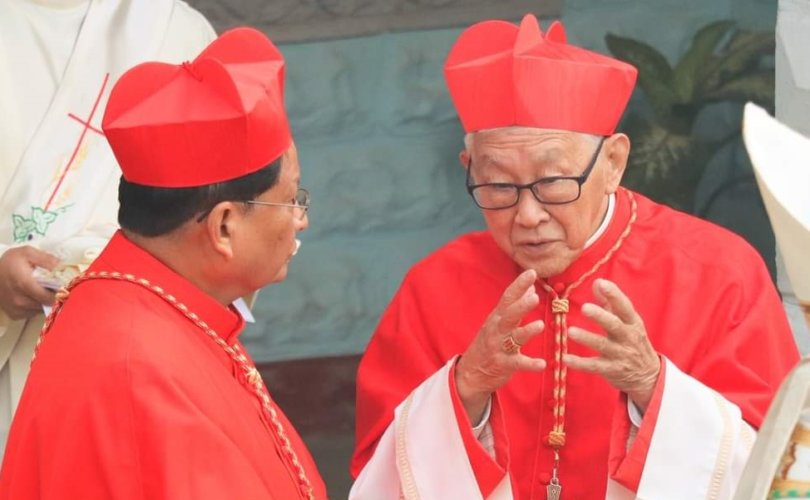 YANGON, Myanmar (LifeSiteNews) – One of Asia’s highest ranking prelates has condemned the recent arrest of respected emeritus bishop of Hong Kong Cardinal Joseph Zen, denouncing his apprehension as a “threat to religious freedom.”

Cardinal Charles Bo, who serves as Archbishop of Yangon, Myanmar, in addition to leading the Federation of Asian Bishops Conferences, expressed “profound concern about the situation for human rights and threats to religious freedom in Hong Kong” following Zen’s arrest on May 11, urging Catholics “and the wider Christian community around the world” to pray for the persecuted Cardinal and the state of Hong Kong.

In a May 14 statement, Bo declared that “freedom and justice” have been forsaken in what was formerly “one of Asia’s freest and most open cities” and lamented its transformation “into a police state.”

“Freedom of expression, freedom of the press, freedom of assembly and association, and academic freedom have all been dismantled. There are early signs that freedom of religion or belief, a human right set out in Article 18 of the Universal Declaration of Human Rights and the International Covenant on Civil and Political Rights, to which Hong Kong is a party, is threatened,” Bo wrote.

READ: Cardinal Zen’s arrest sparks outrage from clergy and politicians around the world

90-year-old Zen was arrested on May 11 under the terms of China’s draconian 2020 national security law, aimed at quelling a pro-democracy uprising against the communists’ tightening grip over the former British territory. Per the law, Hong Kong’s security police arrested Zen for allegedly “colluding with foreign forces.” According to Chinese authorities, the Cardinal was brought in alongside four others for their roles as trustees of the now-defunct 612 Humanitarian Relief Fund.

The fund had offered “legal, medical, psychological, and emergency financial assistance” to those who protested the government’s extradition laws, allowing for the transfer of prisoners to China to face trial. The work of the organization drew the scrutiny of Chinese authorities after assisting more than 2,000 people.

Bo noted that Zen’s work assisting “accused persons [to] have legal defence and representation” was no real crime, but that he has become the victim of “propaganda attacks against the Church” as Hong Kong moves “radically and swiftly down a much darker and more repressive path.”

Zen is set to appear in court on May 24, a date which Bo recognized coincides with that of the “World Day of Prayer for the Church in China and the Feast of Mary Help of Christians and, for China, Our Mother of Sheshan.”

“Last year I called for this to be turned into a Week of Prayer each year,” Bo continued, “and I was heartened when a group of lay Catholics around the world took up my invitation and established the Global Week of Prayer for China.”

“This year I urge Christians of all traditions everywhere to pray for Hong Kong especially, and the Church in China, as well as the Uyghurs, Tibetans and others facing persecution in China, during that Week of Prayer, and to pray especially for Cardinal Zen on 24 May itself as we seek the prayers of Mary Help of Christians.”

RELATED: Global week of prayer for the persecuted Church in China begins in wake of Cardinal Zen arrest

Bo represents one of the strongest voices of support for Zen against the Chinese regime in the wake of his arrest, while both the Diocese of Hong Kong and the Vatican’s responses have been more muted.

Cardinal Pietro Parolin, the Vatican Secretary of State, made efforts to assure the faithful that the controversial Sino-Vatican deal had not been affected by Zen’s arrest as the Holy See announced that it was merely “concerned” about the arrest and that it is “following the evolution of the situation with extreme caution.”

Bo, on the other hand, reminded his flock that “[f]or the people of Hong Kong it is now increasingly difficult to speak out freely, so those of us outside Hong Kong who have a voice must use it on their behalf, and devote our prayers and efforts to showing solidarity with and support for them, in the hope that one day their freedoms will be restored.”