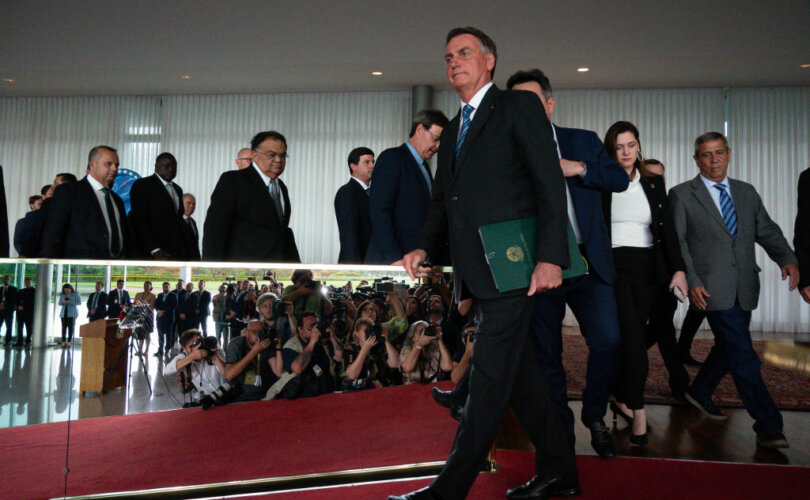 President of Brazil Jair Bolsonaro arrives for a press conference two days after being defeated by Lula da Silva in the presidential runoff at Alvorada Palace on November 1, 2022, in Brasilia, BrazilPhoto by Andressa Anholete/Getty Images

BRASILIA, Brazil (LifeSiteNews) — The Superior Electoral Court of Brazil has tossed out a challenge by conservative parties allied with incumbent President Jair Bolsonaro against the outcome of the presidential election, fining the coalition just under 23 million reais ($4.3 million).

The Liberal Party of Brazil, to which Bolsonaro belongs, filed a 33-page legal challenge on Tuesday against the outcome of the nation’s recent presidential election in which the incumbent reportedly lost by less than two percent of the vote to socialist opponent and former President Luiz Inácio Lula da Silva.

Members of the Liberal Party claimed that they had found “signs of serious failures that generate uncertainties and make it impossible to validate the results generated” in electronic voting machines, affecting some 280,000 devices, thus asking the court to “apply the legal consequences it deems necessary.” With Lula having won on a razor thin margin, invalidating the votes in question would swing the vote to just over 51 percent for Bolsonaro, making him the victor.

The court gave Bolsonaro’s party 24 hours to present evidence of their findings, but after failing to come through on the request the president of the court, Justice Alexandre de Moraes, rejected the challenge on the basis that it was made in “bad faith.”

In his ruling, De Moraes characterized Bolsonaro’s complaint as “offensive to democratic norms” which could “encourage criminal and anti-democratic movements.”

“The complete bad faith of the plaintiff’s bizarre and illicit request… was proven, both by the refusal to add to the initial petition and the total absence of any evidence of irregularities and the existence of a totally fraudulent narrative of the facts,” the judge wrote, adding that all electronic ballots were “perfectly identifiable in a clear, secure and integral way.”

De Moraes has previously railed against Bolsonaro, launching an investigation of the populist president over comments critical of the safety of COVID-19 shots, and more recently stating that the trend of casting doubt on elections as having “began in the United States, with the far-right, and spread to Eastern Europe and then to Brazil.”

Liberal Party President Valdemar Costa Neto said on Tuesday that the intention behind investigating the voting machines was “strengthening democracy,” while a lawyer representing the party said that broken machines do not necessarily “mean that fraud occurred, but that there is a possibility of fragility that leads to a lack of certainty.”

Bolsonaro’s party had released a statement prior to the first round of the elections, noting flaws in some of the machines manufactured before the year 2020.

The electoral court ratified the results of the election, declaring Lula the winner. Lula was previously convicted of corruption in 2017 and sentenced to 12 years’ imprisonment before having the ruling overturned last year.

Bolsonaro did not initially recognize the outcome of the October 30 election, waiting until the following Tuesday to state his acknowledgment of the vote and promising to begin the process for the transition of power; however, the outgoing president did not concede defeat.

Protests broke out in the wake of the November 1 run-off announcement that Bolsonaro’s socialist rival Lula had won the election, with thousands of truck drivers joining by blockading roads. In some locations, construction vehicles and farming machinery were used used to block major roadways that connect regions of the country, with the help of national policing services.

Following continued protests, reports have indicated that supporters of Bolsonaro who have questioned the authenticity of the presidential election are having their bank accounts frozen, while conservative commentators have been banned from their social media accounts after casting doubt on the election outcome.

Help Brazilian pro-life hero raise 46 disabled children
Tonio de Mello is the adoptive father of 46 disabled children, many of whom would have been aborted only for his offer of help, but now he is struggling to provide for their every need. Please consider supporting him today.