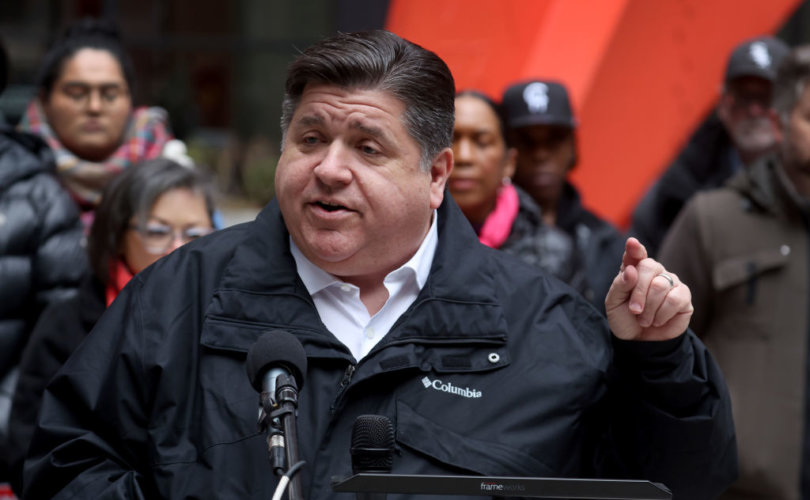 CHICAGO (LifeSiteNews) – The wealthy and influential Pritzker family is behind a push by Lurie Children’s Hospital in Chicago to push gender ideology onto children through public schools.

The renowned hospital has received more than $20 million from James Pritzker and his family. In 2013, James Pritzker said he was “transgender” and began using the name Jennifer. His cousin is J.B. Pritzker, the pro-abortion, pro-LGBT Democratic governor of Illinois. J.B.’s sister, Penny, served as President Barack Obama’s Commerce Secretary. Many of the family members are billionaires from real estate and other business holdings which include the Hyatt hotel chain.

“According to a whistleblower, these documents were circulated to administrators, teachers, and other staff at the middle school and high school level as part of ongoing employee-training programs,” he reported.

— Article continues below Petition —
Free Enoch Burke, the teacher jailed after not using teen's "they" pronoun
Show Petition Text
17724 have signed the petition.
Let's get to 20000!
Thank you for signing this petition!
Add your signature:
Show Petition Text

Employees were instructed in how to support and encourage gender “transition,” according to Rufo. He confirmed in at least two of the school districts that Lurie’s worked to push the sexualization of children.

Lurie Children’s Hospital now funds a team of full-time radical gender theory activists who have created a “school-to-gender-clinic pipeline” from Chicago-area public schools into the hospital for puberty blockers, hormone treatments, and other “gender-affirming” procedures. pic.twitter.com/C89g10nTql

Hospital employees “recommended that teachers offer a series of sexually explicit resources to children as young as 11.”

The hospital also instructs school districts, according to Rufo, to hire “Gender Support Coordinators” which help groom kids for “sexual and gender transitions” without their parent’s knowledge.

LifeSiteNews asked Lurie’s public affairs team for comment on the programs detailed by Rufo but did not receive a response to a Wednesday morning email. LifeSiteNews asked if the hospital believed young girls should bind their breasts and if kids should be encouraged to have sex and how it came to this belief, but no response was received.

The Pritzker family also funds a number of pro-transgender legal and think tanks to advocate for the genital and chemical mutilation of children.

Tablet reported that the Pritzker’s Tawani Foundation funds “institutions that support the concept of a spectrum of human sexes, including the Human Rights Campaign Foundation, the Williams Institute UCLA School of Law, the National Center for Transgender Equality, the Transgender Legal Defense and Education Fund, the American Civil Liberties Union, the Palm Military Center, the World Professional Association of Transgender Health.”

The Tablet article further breaks down the funding received by Lurie’s from the Pritzker family, as well as Governor Pritzker signed pro-LGBT laws.

The push for transgenderism for kids comes as medical experts have warned about the harms of pumping kids full of hormones or permanently severing their reproductive ability.

“If you are interrupting that with clearly the intent of never having it go the direction that nature intended, with biological males ending up as adult males and biological females ending up as adult female, if you interrupt that, you are basically setting up a disease state,” Van Meter told LifeSiteNews in 2021. “And then on top of that, the purpose is clearly in the vast majority of kids that get on puberty blockers, they will not be allowed to go through their own natural puberty. They will be held back and then given cross-sex hormones.”

Endocrinologist Dr. Michael Laidlaw warned, after a review of the literature on transgender drugs, of the harms from them, particularly for young girls. The puberty blockers, he explained, will freeze the growth of the pelvis. If a girl later wants to have a baby, there could be complications because her pelvis has not grown to adult size due to the use of the drugs.

LifeSiteNews has an ongoing series of articles on the harms of transgenderism, the first two of which can be found here and here.