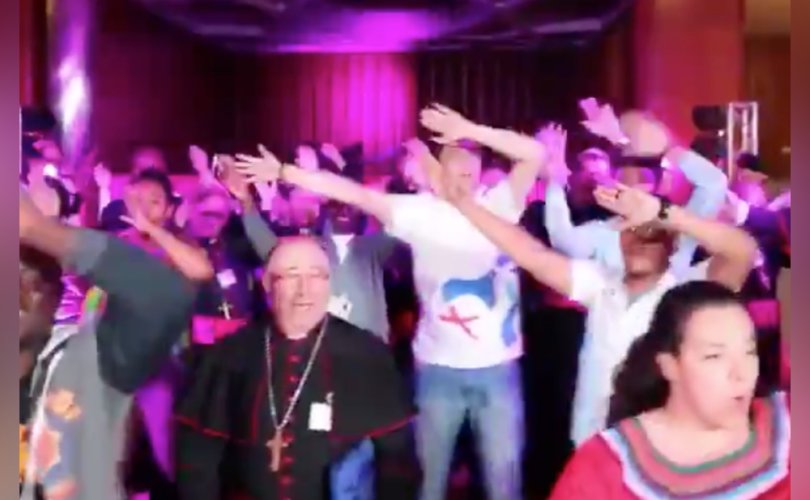 VATICAN, November 6, 2018 (LifeSiteNews) — A video of cardinals and bishops dancing and clapping alongside attendees of this year’s Youth Synod is being criticized by Catholics on social media.

The controversial, some say rigged, synod ran from October 3 until October 28. Included in its vigorously debated 60-page final document are passages on synodality, sexuality, and the role of women that some believe will result in a more liberal, homosexual-friendly Church.

Vatican News reported that the “evening of entertainment,” held on Friday, October 26, was organized by young people who audited the gathering and who wanted to thank the Pope and the Synod Fathers for listening to them.

“We want to affirm that we share your dream: an outgoing Church, open to all, especially the weakest, a field hospital Church,” the 35 young people said in a letter to Francis.

The celebration, which featured what appeared to be lavender-colored strobe lights, took place in the atrium of Paul VI Hall. Cardinal Lorenzo Baldisseri, the Synod’s Secretary General, played piano while “poetry, dance, song and music also formed part of the show,” according to Vatican News.

Baldiserri, who also served as the Secretary General of the contentious 2015 Synod on the Family, defended the use of the term ‘LGBT’ in the Youth Synod’s working document, despite young people not asking for it to be included.

Festive gathering of young people and Synod Fathers at the end of #Synod2018 pic.twitter.com/k13SNzDn7S

None whatsoever – I was too busy filming! pic.twitter.com/uv1avkYLfK

Catholics on Twitter were shocked that such a thing would be taking place, especially in light of the ongoing sex abuse crisis.

Dancing with the bishops. Some of them covered up for the sexual abuse of the young? And now this? What a strange combination. That's why some said earlier that they would never let their adolescent children participate in this synod. Don't dance – protect the youth! https://t.co/CWlSKPt4Vm

One of the establishment Catholic media termed th work of th Synod and th youth a hard 23 days so when it was over it was “pure joy” to go dance with the bishops. Avoiding all accountability, being deceptive and engaging in Stalin type tactics IS exhausting. So, off to the Disco.

Raymond Arroyo, host of EWTN’s The World Over, remarked:

Others suggested that adoration or a Solemn High Pontifical Mass would have been a more fitting way to conclude the synod.

Despite the near-universal outrage, Cardinal Wilfrid Napier defended the Bishop’s and Cardinal’s decision to gyrate alongside young Catholics, telling an interviewer “it was such an innocent thing.”

The dancing that took place on Friday, October 26 wasn’t the first time this year’s synod featured something atypical.

On October 6, just days after being opened, the 2018 Youth Synod hosted a hip-hop dance in Paul VI Hall.

Brian Holdsworth, a popular Catholic YouTube videographer, described the dancing at the 2018 Youth Synod as an attempt at “pandering” by old people “trying to fit in” with young people.