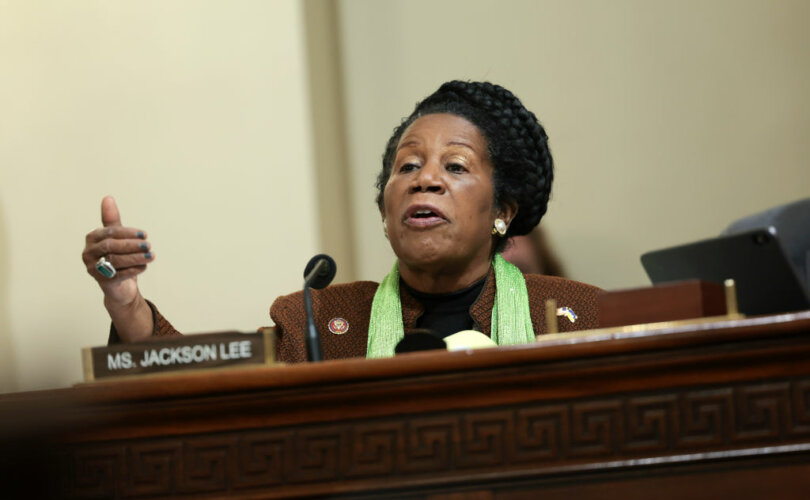 (LifeSiteNews) — A Democrat congresswoman from Texas recently defended partial-birth abortion, claiming that it is “necessary” for parents who are “desperate for a healthy child,” and criticized her state’s pro-life legislation.

Rep. Sheila Jackson Lee, who has represented Texas’s 18th congressional district since 1995, spoke during a Morning Hour meeting for the U.S. House of Representatives on Wednesday, where she used her time to condemn pro-life legislation in her state and advocate for killing the unborn.

“I was here when medical procedures for parents who wanted nothing more than a healthy baby were then characterized as a criminal act and called partial-birth abortion,” she began. “I remember the hearings in the judiciary committee, where mothers were crying because of the medical procedure that was necessary to save their life.”

Partial-birth abortion is when a baby is partially delivered safely, at which point the child is gruesomely killed by an abortionist crushing the skull or using a suction to remove the brain of the baby before completing the delivery.

She continued to smear pro-life lawmakers, saying they “again demonize parents who are desperate for a healthy child,” and stated that “as a person of faith, I believe it should be that woman, that family, that God, and that doctor” who decide whether to kill a baby.

“I’ve seen this before. Extremist views, criminalizing a medical choice that has to be made. Criminalizing abortion from east to west and north to south. I will not have it.”

Jackson Lee then used her state of Texas as an example of so-called extremist abortion regulations, saying that Republican Gov. Greg Abbott “passed a bounty hunter bill to go after doctors, nurses, that would be giving medical care to innocent women and to individuals who were seeking that care [sic].”

“How outrageous in a constitutional democracy that you want to injure people, you want to undermine doctors, and undermine nurses. What an outrage,” she said, concluding her words on abortion.

Since the overturning of Roe v. Wade, Texas has become virtually abortion-free with a ban throughout pregnancy unless an abortion is deemed necessary to save the life of the mother. The trigger law, which went into effect after the Supreme Court’s Dobbs decision, can lead to violators going to prison for life and facing up to $100,000 in fines.

Contrary to Lee’s statements, abortion inherently ends innocent life and poses serious physical and mental health risks to women. Medical leaders have also said that abortion is never necessary to save the life of the mother. If a woman finds her life endangered due to pregnancy complications later in gestation, an abortion is dangerous for the mother because it takes too long to commit. Instead, top doctors have stated that the baby would need to be delivered immediately, which gives both the mother and baby a better chance at surviving serious complications.

Jackson Lee’s pro-abortion commentary came immediately after Republican Rep. Claudia Tenney of New York spoke in support of pro-life pregnancy centers, condemning the string of violent attacks which have targeted these groups since the leaked draft opinion from the Supreme Court that revealed the possibility of Roe’s reversal.

“Pro-life pregnancy centers play a key role in helping women all across the country, but Democrat leadership has been silent on the unprecedented amount of violence leveled against these compassionate advocates for life,” Tenney said.

She noted that pro-life centers saved more than 800,000 lives between 2016 and 2020 “by providing a compassionate alternative to abortion.” Tenney then shared that over 100 of these centers and churches were attacked in 2022, including a firebombing incident at CompassCare, a pro-life center in New York.

“I’m proud to support House concurrent resolution number three, condemning the recent attacks on pro-life facilities, groups, churches, and will not back down to violent extremists.”

Prior to the violent response of abortion advocates when Roe v. Wade was overturned, late-term abortion was already a heated debate. In spring 2022, Republican lawmakers demanded an investigation from the Department of Justice (DOJ) and the mayor of Washington, D.C., into the abortions of five late-term babies whose bodies were found by pro-life activists.

Although the scandal may have violated partial-birth abortion bans, D.C. leaders refused to say whether an investigation was going to occur. This week, the Republican-led House of Representatives passed pro-life measures to protect babies who survive botched abortions and condemning the attacks on pregnancy resource centers.