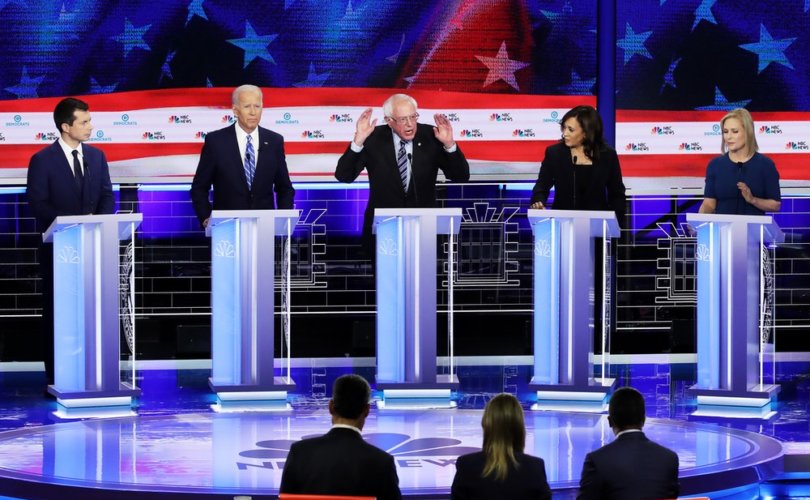 MIAMI, Florida, June 27, 2019 (LifeSiteNews) — Senators Bernie Sanders and Kirsten Gillibrand pushed for taxpayer-funded abortions during the second portion of the Democratic primary debate tonight, with the former repeating a number of old pro-abortion tropes and the latter blasting the Hyde Amendment.

Moderator Rachel Maddow asked Sanders what his plan is if Roe v. Wade — which with its sister decision Doe v. Bolton imposed abortion on demand across the U.S. — is overturned by the Supreme Court while he’s president.

“A woman’s right to control her own body is a constitutional right,” he said. “We will do everything we can to defend Roe v. Wade.” He promised that his litmus test for appointing judges will be whether they are “100%” supportive of abortion.

Maddow pressed Sanders on her actual question, which was what he’d do if Roe v. Wade was already overturned.

“Medicare for all guarantees every woman in this country the right to have an abortion if she wants it,” he answered. During earlier portions of the debate, Sanders and other Democrats clamored for more government-run health care.

Gillibrand then jumped in to deliver a message “to America’s women.”

“Reproductive rights are under assault,” she said, and it’s “mind-boggling” that the right to kill preborn humans is still even being debated. Democrats need to start “playing offense,” not defense, she said, and not compromise on abortion.

Compromise is “how we got to Hyde,” she said, referring to the law Congress renews every year preventing most taxpayer-funded abortions. Gillibrand, who identifies as Catholic, lamented that during Obamacare negotiations, “I had to fight like heck” to make sure contraception and “abortion services” weren’t “sold down the river.”

“I have been the fiercest advocate for women’s reproductive freedom for over a decade,” she concluded.

During other parts of the debate, Mayor Pete Buttigieg mentioned his “husband” Chasten, former vice president Joe Biden reiterated his support for “universal pre-K” and said civil rights include those of the “LGBT[Q] community,” and Planned Parenthood ally Sen. Kamala Harris plugged the pro-abortion Equality Act and Equal Rights Amendment (ERA). Buttigieg also took a swing at Christians — something he frequently does while touting his own faith — for allegedly suggesting that God condones putting children “in cages.”

While decrying the separation of families at the U.S.-Mexico border, none of the candidates mentioned divorce or the violent separation of children from their mothers via abortion.

During her closing statement, Gillibrand once more mentioned abortion and how she will fight efforts to “repeal Roe v. Wade.”

“I have the experience of being in a marriage that exists by the grace of a single vote on the Supreme Court,” Buttigieg said in his closing statement.