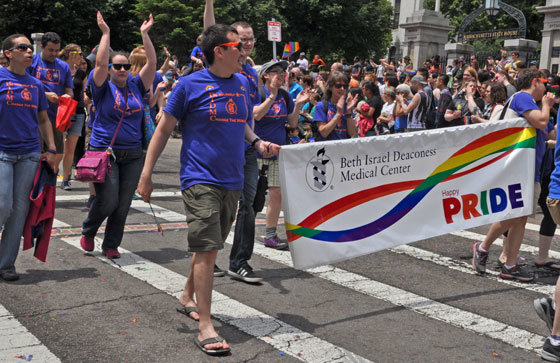 BOSTON, MA, October 7, 2015 (LifeSiteNews) — Dr. Paul Church is one of the most respected urologists in the United States. The 65-year-old Harvard Medical School instructor and 30-year surgeon at Beth Israel Deaconess Medical Center (BIDMC) has conducted live-saving research on prostate cancer and other diseases.

For now, however, Dr. Church is unemployed – the result of a decade-long disagreement with his employer about its promotion of homosexuality, which he says science unquestionably proves is dangerous and unhealthy.

On March 30, 2015 the hospital president and its 25-member Medical Executive Committee fired Dr. Church. He asked for and received an appeal hearing in late July, but the appeals court sided with the hospital administration. His last recourse was an appeal to the hospital board of directors.

At his final appeal Wednesday morning, Dr. Church was allowed 15 minutes to present his case. According to the hospital by-laws, he had to demonstrate that the panel which voted to fire him “acted arbitrarily, capriciously or with prejudice, or that the recommendation of the panel was not supported by the evidence.”

Dr. Church told Brian Camenker of MassResistance that he felt his brief Wednesday morning appeal presentation went well. The hospital board did not indicate to Dr. Church when they would come to a final decision, but they are not expected to deliberate long.

The controversy began brewing ten years ago, when BIDMC began encouraging staff to participate in Boston's infamous Gay Pride parade, and started a campaign of official support and promotion of the LGBTQ lifestyle, including hosting an annual LGBT Achievement Award ceremony for “outstanding contributions towards advancing LGBT issues.”

Concerned for patient welfare, Dr. Church took issue with a hospital encouraging unhealthy behaviors. In an inter-office memo, he expressed his concerns for the good of BIDMC patients, and listed statistics from the federal Center for Disease Control about the health risks of homosexual behavior. Dr. Church noted that by supporting homosexual activities, the administration was acting against its mission statement. BIDMC’s mission statement says it exists “to create a healthy future for (our patients) and their families.”

“In medicine, we have a higher commitment and mission to promote healthy lifestyles and behaviors,” Dr. Church later told World Magazine, “but promoting homosexuality is contrary to that mission.”

Dr. Church was told to keep the truth to himself. He, in turn, asked to be taken off the email list of those receiving promotionals for Gay Pride parades, but his email address was not taken off, and the in-your-face Homo-Promo continued for ten years. He continued to respond with facts and concern – not only for patients, but also for hospital staff whose faith is affronted by the hospital's encouragement of homosexual behavior.

Eventually, the Chief of Surgery, head of Human Resources, Chair of the Urology Department, and the hospital attorney told Dr. Church that he had to resign, or be suspended for “harassment,” and “discrimination,” and “unprofessional conduct,” and sending “offensive” emails. He refused to resign.

“The medical community should be cautioning people to avoid and abstain from a behavior that is high risk. The political agenda is superseding common sense,” Dr. Church reasoned. “We don’t have a smoker’s celebration, so why do we have a ‘gay’ pride celebration?”

A “Peer Review Committee” sent Dr. Church a “Letter of Reprimand” and issued a gag order for him to stop talking about the medical facts regarding sodomy. “This is almost a fascist effort at mind control,” Dr. Church told WND.

The hospital then created a pro-gay video for all staff. Dr. Church contacted the videographers, offering to help create a video explaining an opposing view. This was “crossing a line,” according to the hospital administration.

The mainstream media has largely ignored Dr. Church's unjust firing. Townhall.com reports that apart from two divergent groups mentioning Dr. Church's termination, “the Massachusetts media, liberal and conservative, have reported nothing on this trampling of freedom of speech.”

Conservative and pro-family organizations, however, have responded in large numbers. On Sept 18, Camenker delivered over 4000 petitions – from all 50 states and 77 foreign countries – to the BIDMC president’s office, demanding Dr. Church's reinstatement.

“Most of us have always trusted doctors and hospitals to do the right thing. But now the medical profession is forcing doctors to put the desires of the radical homosexual movement before the health of patients,” Camenker, who has helped organize several protests at BIDMC, commented to LifeSiteNews. “This is very frightening and will have terrible consequences down the road.”

“If the Gay Gestapo can put a man of Dr. Church's caliber and expertise out on the street, no one in the medical profession is safe,” Bryan Fischer of the American Family Association wrote.  “Every time homosexuality wins, religious liberty loses. We as a nation must choose between homosexuality and Christianity because we cannot have both.”

Camenker asks, “How can we trust the medical profession with our health and safety, if it expels a doctor for telling the medical truth?”