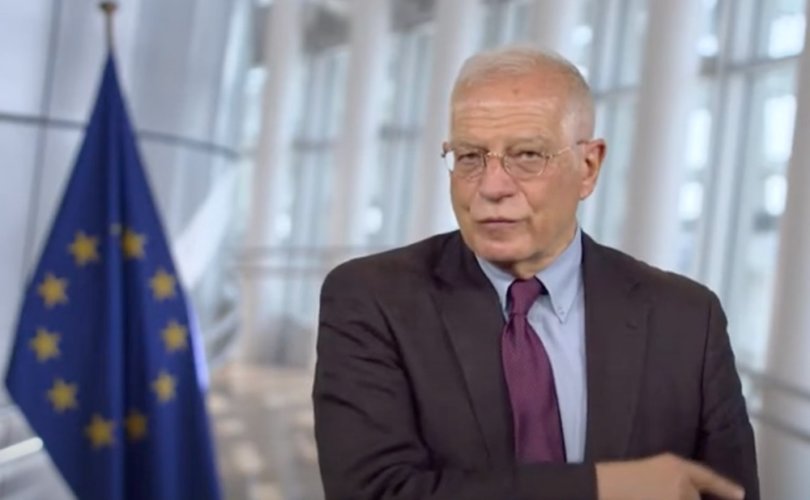 BRUSSELS, May 26, 2020  (LifeSiteNews) – A top European Union (EU) diplomat has said that the coronavirus is accelerating “the end of the American-led system and arrival of an Asian century,” while urging EU nations to work together with “collective discipline” to form a “more robust strategy” for engagement with China.

Josep Borrell, High Representative of the EU for Foreign Affairs and Vice-President of the European Commission, made the remarks in a recorded address to a conference of German ambassadors on Monday, with Germany set to take over the six-month rotating presidency of the EU in July.

Borrell described COVID-19 as “the great accelerator of history” before saying that “the end of the American-led system and arrival of an Asian century…is now happening in front of our eyes.”

“If the 21st century turns out to be an Asian century, as the 20th was an American one, the pandemic may well be remembered as the turning point of this process,” he said.

The EU diplomat said that the increasing rivalry between the U.S. and China means “the pressure to choose sides is growing,” but that the EU should “follow our own interests and values and avoid being instrumentalized by one or the other.”

Borrell stressed that relations between the U.S. and China were having “paralyzing effect on the multilateral system” and that the “globalization model is under pressure,” with the world becoming more “state-driven.”

However he urged the 27 European nations to form a “collective discipline” in order to engage effectively with China, saying that relations between China and the EU were not always “based on trust, transparency, and reciprocity.”

Borrell said a “real common strategic culture as a ‘Team Europe’” is required for a “more robust strategy for China,” but lamented that the EU bloc was often unable to reach a consensus because “member states cling to their national viewpoints instead of understanding that there is a broader common interest.”

“China's self-image shows a country that is emerging from the crisis better than anyone else. But what does it mean for global trust in China as a leading power if demands for transparency are consistently ignored? And will international companies continue to produce ‘just in time’ in China if the causes of such a crisis are not verified?” Maas said.

China’s failure to accurately report coronavirus cases has been repeatedly questioned by U.S. President Donald Trump. The U.S. halted funding to the World Health Organization (WHO) in April, after Trump said that the U.N. health group had “failed to investigate credible reports [on coronavirus cases] from sources in Wuhan that conflicted directly with the Chinese government's official accounts.” On April 30 the WHO’s China representative appeared to blame the Chinese government for having covered up the true number of coronavirus cases in the country.

On May 23 in an interview with Breitbart News, U.S. Vice President Mike Pence said China has “let the world down” in its response to the coronavirus.

“China let the world down and [the] World Health Organization was their willing partner, in withholding from the United States and the wider world vital information about the coronavirus that would have made it possible for us to stand up a national response sooner.”