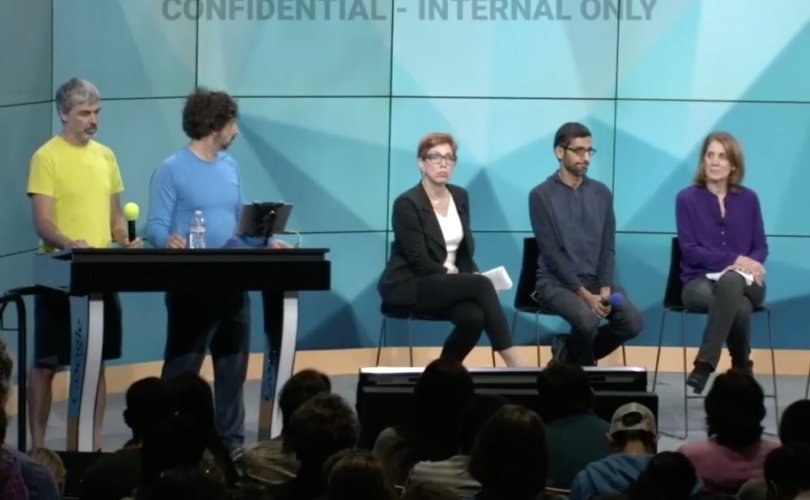 September 17, 2018 (LifeSiteNews) – Google’s co-founders and other top executives reacted to the 2016 U.S. election of Donald Trump with anguish, contempt, and resolve to alter future elections, according to a newly-leaked video of an internal meeting.

Brin opens the meeting by stating that “most people here are pretty upset and pretty sad” about the election’s outcome. After joking about Colorado’s legalization of marijuana being a silver lining, he bemoans the “deeply offensive” election for “conflict[ing] with many of our values.”

Trump’s ascent signified “tribalism that’s self-destructive [in] the long-term,” according to Walker. “We all need a hug,” Porat says.

Google officials attribute a variety of disreputable motives to the millions of Americans who voted for Trump, including “xenophobia, hatred,” and “privilege.” Brin theorizes that Trump voters were driven partly by “boredom” with their “routine jobs,” which he claims was historically a contributing factor to the rise of “extremism” such as “fascism and also the Communist revolution.”

He also suggests some Trump voters were acting out of emotion rather than reason, because it “feels kind of good to just, like, give DC a big kick when you vote.”

Brin does acknowledge that Trump voters are a diverse lot with diverse concerns, and Naughton even admits that some conservative Google employees told her they “haven’t felt entirely comfortable revealing who [they] are,” though such recognition did not stop the company from firing engineer James Damore almost a year later over a memo criticizing the company’s culture of intellectual lockstep.

But while the confirmation of Google leadership’s political leanings has surprised few, conservatives are far more alarmed by the video’s multiple statements expressing a clear desire to use its resources to influence future elections.

Brin raises the question of how Google can ensure a “better quality of governance and decision-making.” Walker calls on the audience to “be in the arena” to “make sure” that what he calls the current period of “populism, of nationalism” is no more than a “blip” or “hiccup” in a “moral arc of history bend[ing] towards progress.” Porat tells the audience that Google intends to “use the great strength and resources and reach we have to continue to advance really important values.”

Specific examples that are discussed include making “investments in machine learning” and “conversation AI” to help combat so-called “misinformation, disinformation” and “fake news” supposedly disseminated among “millions of low-information voters”; increasing matched donations by Google employees to left-wing groups; and encouragement to read up on “privilege” and the “real history of oppression” in America.

One audience member called for injecting politics into Thanksgiving dinner conversations, and that leftists not “back down and laugh it off when you hear the voice of oppression speak through metaphors.” Every Google official on stage applauded the call.

The leak of the video follows a leaked email chain earlier this week, also from the wake of the election, in which Google Multicultural Marketing department chief Eliana Murillo explains how she expected the company’s Latino voter mobilization efforts to benefit Clinton. Both are particularly concerning in light of an internal memo from the far-left Media Matters detailing the group’s efforts to get Google to ban certain conservative websites from its advertising platform (Google has in the past flagged multiple LifeSiteNews ads for alleged violations of its policies).

Following Breitbart’s report, Google released a statement claiming that “some Google employees and executives” merely “expressed their own personal views,” and insisting that nothing in the video “suggest that any political bias ever influences the way we build or operate our products.” it did not explain the multiple quotes indicating a desire to use Google resources to prevent 2016 from repeating itself.

Despite its professed independence, Google has been accused of discriminating against conservatives in multiple ways over the years. Complaints include heavily biasing news searches for the term “trump” with results from left-wing website, and the Google-owned YouTube attempting to restrict multiple conservative groups, such as Dennis Prager’s Prager University, under false pretenses.

Google “needs to explain why this isn’t a threat to the Republic” when the video shows it believes they can shape your search results and videos to make you ‘have their values,’” Trump 2020 campaign manager Brad Parscale said, calling on Congress to investigate. The company refused to appear at a Senate hearing on tech companies’ election practices, Breitbart notes.

.@google needs to explain why this isn’t a threat to the Republic. Watch the video. Google believes they can shape your search results and videos to make you “have their values”. Open borders. Socialism. Medicare 4 all. Congressional hearings! Investigatehttps://t.co/jlbSgMMrLT

It remains to be seen what, if anything, the federal government will do about political discrimination among social media and tech giants.

Should conservatives and Republicans “start conservative companies and platforms to compete with them? Break them up under the Sherman Act? Turn them into regulated public utilities, with public employee-level salaries and no stock options?” PowerLine’s John Hinderaker wrote. “Those are all possibilities. After watching the video, you no doubt will be ready to take action.”