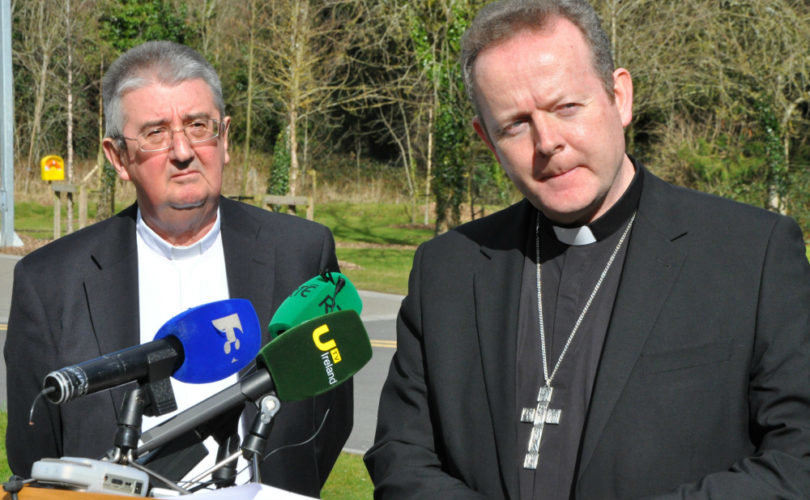 IRELAND, May 30, 2018 (LifeSiteNews) – Ireland’s top Catholic prelate has backtracked comments he made about keeping abortion “rare,” “safe,” and “legal,” saying he shouldn’t have used that language.

Archbishop Eamon Martin, the archbishop of Armagh and the Primate of All Ireland, used the pro-abortion phrasing in an interview with RTE. His use of the mantra typically repeated by abortion advocates was shown in a clip that was “heavily edited” and “taken out of context,” his spokesman told LifeSiteNews.

“I would hope that those who advocated a ‘no’ during the campaign will now work very actively to try to ensure that the legislation that is passed, as the Taoiseach himself said, allows for abortion which is rare, which is safe, and which is legal,” Archbishop Martin said in a pre-recorded video interview with RTE. That was the only clip of Martin shown in a segment on how Ireland just voted to legalize abortion.

According to the newscaster, “The Primate of all Ireland said he was challenged by the personal stories shared in the referendum campaign and that it made him realize how little he personally knows about the pressures women can be under.”

“Archbishop Eamon Martin’s words were heavily edited in the broadcast by RTÉ and these were taken out of context for that very short prerecorded clip,” Martin Long, communications director for the Irish Catholic Bishops’ Conference, told LifeSiteNews. “The Archbishop continues to call on all people to reject abortion and to choose life.”

“The Archbishop asked me to tell you he agrees fully with the Church’s teaching on abortion and that he should not have used the quotation which you cite[,] which came from the Irish Prime Minister Leo Varadkar,” Long said when LifeSiteNews asked how an abortion could ever be “safe” for the baby it destroys, and why Martin chose to suggest that.

Long referred LifeSiteNews to the archbishop’s pro-life record and his Sunday homily, during which he said, “Like many others who advocated a NO vote in the referendum, I am deeply saddened that we appear to have obliterated the right to life of all unborn children from our constitution and that this country is now on the brink of legislating for a liberal abortion regime.”

“I am very concerned about the implications for society of interfering with the fundamental principle that the value of all human life is equal and that all human beings, born and unborn, have inherent worth and dignity,” he said. “At a time when scientific and medical evidence is clearer than ever about the beginning of life, we have effectively decided that some human lives – in this case the lives of the unborn – are less significant and deserving of protection than others.”

Archbishop Martin used his 2018 Pastoral Message for the New Year to ask Catholics to be “missionaries for life” and to remind them, “abortion ends the human life of an unborn girl or boy.”

“No doubt Archbishop Martin is appalled by abortion, yet it is emblematic of the problems within the Church that the Primate of Ireland should be so misguided that he would adopt the language of the abortion lobby,” Maria Madise of the Society for the Protection of Unborn Children and Voice of the Family told LifeSiteNews. “Using the slogan ‘safe, legal, and rare’ can only mislead Catholics into thinking that there is an acceptable level of abortion. Every single abortion is an act of lethal violence directed at an unborn child. It is intrinsically evil and can never be justified.”

“The Bishops in Ireland do not seem to recognise the responsibility they bear for the actions of their flock in voting for abortion,” said Madise. “The Irish Church needs leaders who will preach the Gospel fearlessly and make it clear that it’s impossible to support the legalisation of abortion and remain a faithful Catholic.”

Archbishop Diarmuid Martin (not related to the other archbishop), the archbishop of Dublin, said the results of the referendum should inspire pro-lifers to fight injustices other than abortion.

He told RTE, “We have to revamp all the things we do to be pro-life, because pro-life isn’t simply about birth and death – it’s about all the time in between…and to show a real commitment to the many other ways which lives are at risk in Irish society.”

On May 16, Dublin’s Archbishop Martin said repealing the pro-life Eighth Amendment would be a “point of no return.”

“It seems incongruous that just as medical science allows us to understand much more about the evolution of the baby in the womb and his or her originality and unique identity that we should simply throw out all Constitutional protection of the unborn child,” he said. “For that reason I will be voting No.”

In the same message, though, he said that the “narrow moralistic culture” that ostracized and “humiliated” single mothers was “often sadly enhanced by the attitude of the Church.”

During Holy Week in 2017, he also suggested Catholicism has left people “oppressed by guilt,” something with which many who experienced Irish Catholicism's soft approach over the past half-century would strongly disagree.