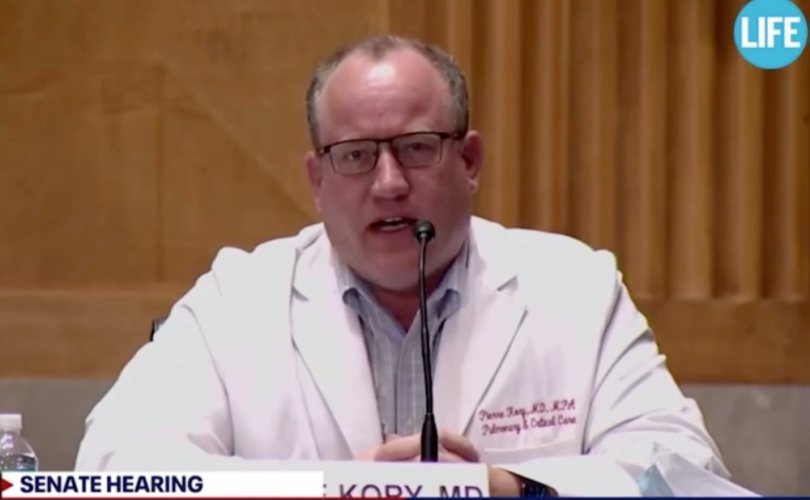 (LifeSiteNews) – Dr. Pierre Kory, a world leader in ivermectin efficacy regarding illness associated with a COVID-19 infection, tweeted October 7 that numerous members of Congress used ivermectin as part of a COVID treatment protocol.

“ … Between 100-200 United States Congress Members (plus many of their staffers & family members) with COVID .. were treated by a colleague over the past 15 months with ivermectin & the I-MASK+ protocol at https://flccc.net. None have gone to hospital … ” he wrote.

Dr. Kory doubled down after the veracity of what he tweeted was contested on the social media platform.

He reiterated his remarks from October 7 by stating, “To all the comments asking for sources/names for the below:

2) I would never divulge the medical treatments of individual members, nor do I know them myself

Twice in 2020, Dr. Kory was invited to testify to the U.S. Senate Committee on Homeland Security and Governmental Affairs about the treatments he and his colleagues in the Front Line COVID-19 Critical Care Alliance (FLCCC) were using successfully. His willingness to testify in the presence of the government and to the public shows that he is forthright in speaking what he believes to be true.

In early 2020, he and his colleagues strongly recommended that doctors use corticosteroids when a patient diagnosed with COVID fell ill. At the time, this was not the norm and was not recommended by the mainstream in U.S. medicine.

The efficacy of corticosteroids used by COVID patients was confirmed weeks later in the results of Oxford University’s Recovery trial (June 2020). Steroids then became the “standard of care” worldwide in hospital treatment for COVID-19.

In December 2020, Dr. Kory returned to Washington to advocate ivermectin use as an early treatment drug for COVID patients. During his Senate testimony, he called for the government to swiftly review the already expansive and still emerging medical evidence on ivermectin.

Dr. Kory testified that ivermectin is effectively a “miracle drug” against COVID-19 and called upon the government’s medical authorities — the NIH, CDC, and FDA — to change strongly consider adding ivermectin to list of available treatments for the Chinese coronavirus.

The protocol is “centered around ivermectin, a well-known, FDA-approved anti-parasite drug that has been used successfully for more than four decades to treat onchocerciasis ‘river blindness’ and other parasitic diseases.” In addition, the FLCCC stated that ivermectin “is one of the safest drugs known.”

Regarding their reasons for adopting ivermectin as part of the I-MASK+ protocol, the FLCCC wrote, “Our medical discovery of a rapidly growing published medical evidence base, demonstrating ivermectin’s unique and highly potent ability to inhibit SARS-CoV-2 replication and to suppress inflammation, prompted our team to use ivermectin for prevention and treatment in all stages of COVID-19.”

Their website offers a comprehensive fact sheet and protocol instruction for doctors to follow if they are treating a patient who has been diagnosed with COVID.

Ivermectin has been a source of controversy as the mainstream media have routinely labeled the drug as “horse paste” or “horse dewormer.” Like many drugs, ivermectin is used on both animals and humans, which is the case for various medicines, including over-the-counter pain medications.

Other countries around the world have long acknowledged the efficacy of ivermectin in treating humans diagnosed with COVID. A doctor in Japan attested to his near 100% success rate in treating patients with the drug. Furthermore, the Japanese medical association chairman told doctors last February to prescribe ivermectin for COVID.

The Japanese top doctor appealed to research and studies from countries around the world that show what he called a “clear difference between the illness and fatality rates amongst nations that use ivermectin and those that do not.”

Currently, doctors in Canada are being severely disciplined if they advocate for the use of ivermectin with their patients, including one doctor who was ordered to leave the hospital with a “15-minute notice” for treating COVID patients with ivermectin.