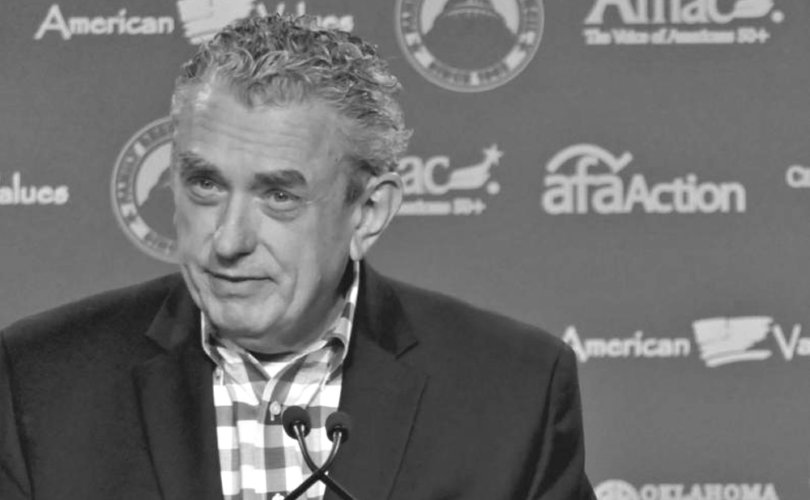 July 3, 2018 (LifeSiteNews) – When a conservative columnist got a visit from the FBI, he was surprised to discover it was because of a tongue-in-cheek message he had written on Twitter.

Austin Ruse had noticed that the Human Rights Campaign, an LGBT lobby group that targets social conservatives and other dissidents, was running a campaign on Twitter asking business owners to place LGBT “rainbows” somewhere visible on their premises, preferably on their front windows. Reminded of protection rackets, Ruse called out the Human Rights Campaign on their invitation.

“That’s a nice business. Too bad if something happened to it,” he tweeted.

In response, the Human Rights Campaign made a civil rights complaint to the FBI. By law, the FBI had to follow up, and so Ruse found him having to explain his tweet over the phone to an FBI agent.

“I told him it was a reference to the mafia shaking down businesses for protection,” Ruse recalled. “Of course, he knew that. He chuckled when I told him. You could tell he was rather embarrassed at having to ask. He could not have been nicer.”

The federal agent said “I thought so” and “no problem” and that was the end of that, leaving Ruse chagrined that the Human Rights Campaign had wasted the FBI’s precious time over his tweet. The columnist called it akin to “swatting” – tricking law enforcement into sending a SWAT team to someone’s house – and to filing a false police report.

“It should be noted that this group [HRC] has been designated a hate group by the American Family Association for their attacks on Christians who stand up for traditional sexual morality,” Ruse wrote.

But of even more concern to Ruse is the potential for harassment of business owners who don’t agree to put rainbow sticker in their windows, which he repeats resembles a mafia shakedown. He accused the anti-Christian group of intimidating businesses into “accepting their propaganda.”

“It works like this,” he wrote. “A local restaurant is owned by a faithful Catholic who objects to the gay agenda. He does not want to put up the gay rainbow. He finds it offensive. So, he doesn’t put it up. Gays notice he doesn’t have the gay rainbow affixed to his window. ‘Why don’t you have the rainbow on your window?,’ they ask. ‘Are you homophobic? Do you really want the local community to know about you?’ You can see it spooling out from there. He is targeted by the local bully boys who proceed to make his life miserable, perhaps harming and even shuttering his business.”

He observed also that the group had stooped to using federal agents to harass its critics.

Ruse is the president of the Center for Family and Human Rights (C-Fam) and the founding columnist at TheCatholicThing.org. He frequently appears on news programs to discuss Catholic issues, and has written two books, Fake Science: Exposing the Left’s Skewed Statistics, Fuzzy Facts, and Dodgy Data (Regnery Publishing, 2017) and the award-winning Littlest Suffering Souls: Children Whose Short Lives Point Us to Christ (Tan Books, 2017).