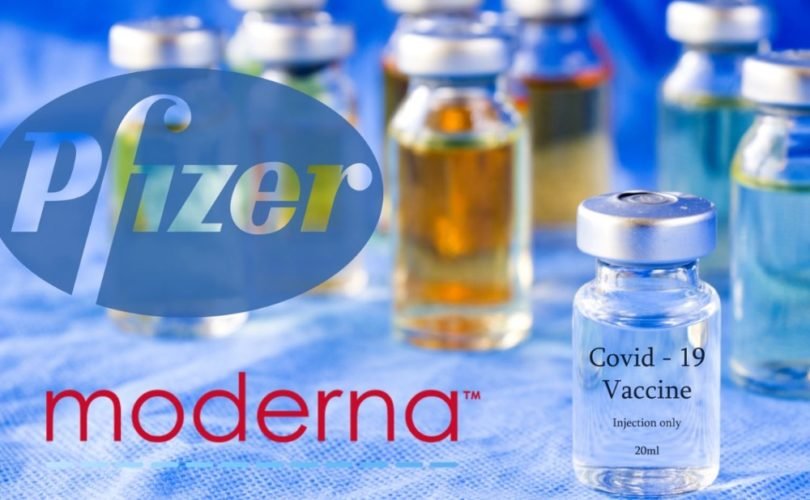 NEW YORK (LifeSiteNews) — The top eight Pfizer and Moderna shareholders saw their combined wealth rise by $10 billion in a seven-day windfall after the Omicron variant was discovered, according to a report in the Daily Mail.

With the discovery of Omicron making headlines globally from November 24, the personal wealth of Moderna CEO Stephane Bancel rose by $824 million alone amid the company’s rapid share growth, with the pharma boss selling 10,000 shares of his own stock in that period for a cool $3.19 million.

Investment giant Vanguard Group Inc. saw the value of its shareholdings in Pfizer and Moderna increase by more than $2.7 billion after the Omicron news, with Blackrock Inc.’s shares rising by more than  $2.4 billion and Baillie Gifford & Co’s Moderna stock valuation climbing by more than $1.5 billion.

Bancel’s share value reportedly rose by $1.7 billion at one point during the last week of November, but a lost legal dispute concerning company patents brought his stocks down to an $824 million valuation.

Neither company denied the staggering figures when contacted by the Daily Mail.

Reacting to the news, Irish senator Sharon Keogan said politicians needed to “check the stock market” and “join the dots” in assessing who benefits from the global response to COVID, and to cease making the participation of people in society “contingent upon the consumption of the product of a private company under direct or indirect threat of force.”

The Pifzer CEO’s recent prediction that people will need an annual COVID vaccination for many years to come was sardonically compared by the senator to a Coca-Cola CEO recommending a can with every meal, “because I’m sure he’s just concerned for people’s safety.”

Keogan then laid out the remarkable discovery that “in the week of Omicron it was discovered the wealth of the eight top Pfizer and Moderna shareholders rose by a combined €9 billion ($10 billion USD).”

“Governments globally have collectively made ordinary participation in society contingent upon consumption of the product of a private company under direct or indirect threat of force,” Keogan lamented in her December 9 speech.

“Over the past two years, the livelihoods of ordinary people have been steadily siphoned into the pockets of pharma and tech giants — the only hope we have is in recognizing that this is an entirely unsustainable (situation), and will end,” she predicted.

“Here’s to sooner rather than later,” she added.

LifeSiteNews last week reported how at least 75 federal legislators in the United States held stock in Moderna, Johnson & Johnson, or Pfizer in 2020.

The data raised serious ethical concerns about the objectivity of the U.S. legislature, prompting questions about how much government actors stand to profit from coercive jab mandates that have deprived Americans of their rights and handicapped a struggling economy.

Public Citizen’s report noted that Pfizer has negotiated contracts with nations to ensure it retains the right to actually “silence governments” while funneling disputes through private arbitrators rather than public courts.

In Brazil, for example, Pfizer demanded the country waive its “sovereign immunity waiver on public assets” and agree to a “lack of penalties for Pfizer if deliveries were late.”

After first arguing Pfizer’s terms were “unfair and abusive,” Brazil ultimately agreed to them, even consenting to “resolve disputes under a secret private arbitration under the laws of New York” and to “broadly indemnif[y] Pfizer for civil claims.”

In addition to Brazil, Pfizer also required Chile, Colombia, the Dominican Republic, and Peru to waive their sovereign immunity.

Indian news channel WION also reported that Pfizer had astoundingly asked Argentina to put “its bank reserves, its military bases, and its embassy buildings at stake as collateral.”

But Pfizer’s alleged “bullying” and apparent moves to silence governments has not been limited to Latin American countries.

The report added that in the United Kingdom, “[a] secret panel of three private arbitrators — not a U.K court — is empowered under the contract to make the final decision” in the event of a contractual dispute with Pfizer, while “[b]oth parties are required to keep everything secret.”

The same is true in the United States, in which both the U.S. government and Pfizer have agreed not to discuss the “existence, subject matter or terms” of the contract “without the prior written consent of the other.”

Pfizer is not unfamiliar with being hit with massive criminal and civil liability claims, which may explain its eagerness to defend itself against future lawsuits.

According to the DOJ, Pfizer misbranded an anti-inflammatory drug that had been pulled from the market, promoting its sale “for several uses and dosages that the FDA specifically declined to approve due to safety concerns.”

Pfizer’s subsidiaries pleaded guilty to a felony for misbranding the drug “with intent to defraud or mislead,” and the company was ordered to pay a criminal fine totaling $1.3 billion, “the largest criminal fine ever imposed in the United States for any matter.” Pfizer paid out another $1 billion “to resolve allegations” related to the illegal promotion of three other drugs.

The reluctance of health authorities to approve the use of ivermectin as a viable and inexpensive treatment or prophylactic for COVID-19 has come under sustained criticism from many experts, with clear evidence emerging that some academics were coerced into suppressing favorable data.

Many critics have noted that the “emergency use authorization” given to the experimental vaccines by the FDA could only have been obtained in the absence of safe and effective alternative treatments, such as ivermectin.