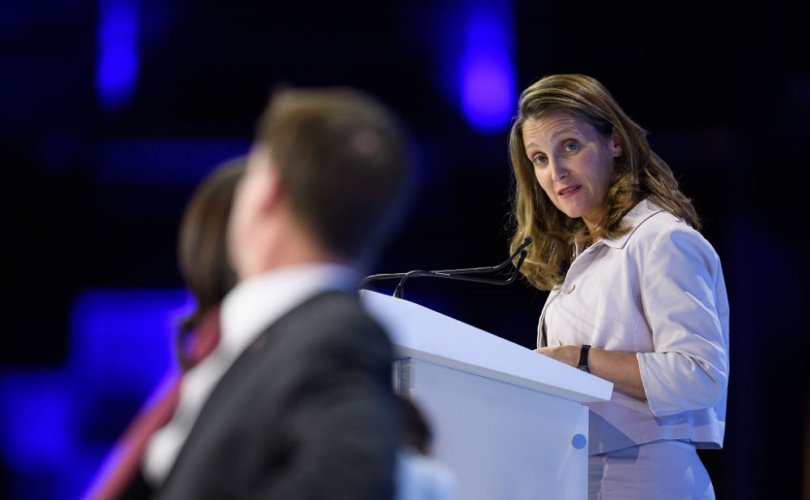 TORONTO, Ontario, August 26, 2020 (LifeSiteNews) — Canada’s leading pro-life and pro-family group has said the resignation of Bill Morneau as finance minister is a good thing, considering his pro-abortion and anti-life stance, but that his replacement is “deplorable.”

“We are pleased to see Morneau resign for another reason. He has a red light rating from CLC because he’s a rabid pro-abortion, pro-transgender ideology MP with a deplorable voting record.”

Morneau resigned Monday amid his on-going involvement with the WE Charity scandal and alleged disagreements with his former boss, Canadian prime minister Justin Trudeau.

On Tuesday last week, Trudeau named Deputy Prime Minister Chrystia Freeland to take over as finance minister. On the same day, he also asked the Canadian governor-general, Julie Payette, to prorogue Parliament until the fall.

Fonseca told LifeSiteNews that despite Morneau’s resignation, his replacement is not a good choice when it comes to life issues.

Both Trudeau and former finance minister Morneau are under investigation by the ethics commissioner and have issued apologies for not recusing themselves from their cabinet discussions to approve the now canceled contract with the WE Charity.

Morneau recently told the finance committee charged with investigating the scandal that he wrote a check for $41,366 as reimbursement for WE Charity travel expenses he had incurred for two family trips with the organization in 2017.

Due to parliament’s suspension, all committee hearings on the WE Charity scandal have come to a halt.

Fonseca told LifeSiteNews that CLC hopes the WE Charity scandal brings down the “entire Liberal regime.”

“Justin Trudeau should be next since he’s even more guilty of corruption and violating ethics laws than his disgraced Finance Minister,” Fonseca told LifeSiteNews.

“It’d be wonderful to see the entire Liberal regime fall over this financial scandal involving WE, but alas, Commissar Trudeau has already enacted a plan to halt all parliamentary committee investigations into his ethical misdeeds with WE Charity.”

Last week, Conservative M.P. Pierre Poilievre, who sits on the finance committee investigating the WE Charity scandal, called for the immediate release of 5,000 pages of WE scandal documents before Trudeau closed parliament.

Although the documents were made public, Poilievre directly accused Trudeau of a “cover-up” last week after it was discovered that many documents related to the WE Charity were released in a heavily redacted form.

The WE Charity scandal became public knowledge after a Rebel News exclusive report exposed that WE Charity founders Craig and Marc Kielburger had donated to Trudeau’s political campaign and the Liberal Party.

This quickly prompted the Canadian federal government to end its agreement with WE Charities to administer a $900-million student summer volunteer grants program. Trudeau announced that civil servants would administer the program instead.

The Kielburger brothers founded Free the Children in 1995, which is the precursor of today’s WE global “youth empowerment movement,” which includes WE Charity, known for its stadium extravaganzas for students across Canada.

WE Charity has announced that it is canceling WE Days “indefinitely” and is instead focusing on restructuring.

The president of a Canadian pro-family group Parents as First Educators (PAFE) recently told LifeSiteNews that now is the time for parents to be “vigilant” and speak out against WE Charity, to keep that organization from being a part of their children’s education in public school.

“Parents should act now to inform school boards that they expect them to protect children from being sucked into the cult-like circus that WE Charity has become,” said Teresa Pierre, Ph.D., president and founder of PAFE to LifeSiteNews.

Moreover, performances at WE Days “have been repeatedly criticized by family values organizations over the years for their raunchy lyrics and suggestive dance routines,” observed PAFE’s Pierre in a past email to supporters.

O’Toole beat out the mainstream media favorite Peter MacKay on the third ballot.

The close race saw the only two pro-life candidates in the running, Ontario M.P. Derek Sloan and Toronto lawyer Leslyn Lewis, take home a total of 35 percent of the vote on the first ballot.