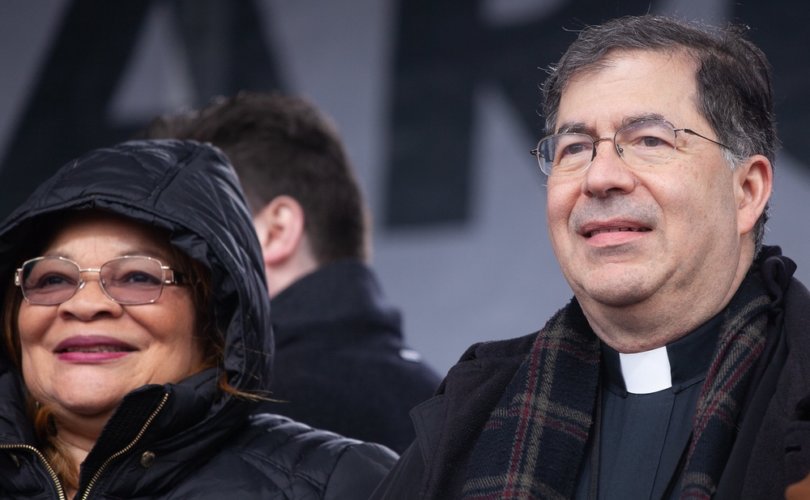 June 25, 2020 (LifeSiteNews) – A priest well-known for his pro-life activism has penned an open letter to U.S. bishops asking them to use their authority to allow clergy to publicly advocate for the political party in the upcoming 2020 election that is pro-life and pro-religious freedom. The priest also asks for the right to name and discredit the opposing political party.

“The rights of the Church and the common good are under attack in unprecedented ways by the Democrat Party,” Fr. Frank Pavone, National Director of Priests for Life, declared in a June 25 open letter to the U.S. bishops (read full letter below).

Pavone noted how current Church directives forbid clergy from engaging in partisan politics. He also pointed out, however, that the current political situation is something that such directives do not take into account. The priest’s letter, written to coincide with Religious Freedom Week, points out that guidance from the hierarchy often frustrates and hinders the mission of clergy and lay people when it comes to articulating and applying the teachings of the Church to the political realm.

“When,” says Pavone, “the faithful are told not to ‘engage in any political activity which seeks to support or discredit any political party or candidate’ one wonders how the moral judgment in matters relating to politics is to be expressed.”

“When the Republican Party stands firmly for the principle that government cannot authorize the killing of babies, and the Democrat Party firmly rejects that principle by embracing unrestricted abortion, how is it possible for the Church ‘to proclaim its teaching’ without discrediting (implicitly if not explicitly) the political party that so obviously opposes that teaching?” Pavone asks the bishops.

Pavone said that clergy are “left to fight with two hands tied behind our backs and a gag over our mouths bearing an episcopal seal.”

“The approximately 100,000 political races that comprise ‘the 2020 Elections’ bring us to an unprecedented choice in America,” emphasized Pavone.  “Never has the political divide been more substantial or consequential.”

“Never has the voice of the Church been more needed; everything we stand for and have fought for is on the line,” he added.

With deep respect, and with equally deep urgency, I write to extend to you, individually and collectively, an invitation to engage in a public dialogue regarding some specific aspects of the involvement of Christ’s faithful in the elections of 2020, now underway in the United States. In the context of this invitation, and consistent with Canon 212 §3, I also would like to point out a persistent problem in this regard that is hindering the common good and the rights of the Church.

Specifically, I refer to the repeated guidance issued from dioceses, Catholic Conferences, and the USCCB that restrict the speech of clerics and lay faithful in ways that not only exceed any restrictions found in Canon Law and Civil Law, but that are impossible to fulfill because of their broad reach and vagueness. As a result, rather than fostering unity among the People of God in the pursuit of the mission they eagerly engage by virtue of their baptism and confirmation, this guidance discourages and frustrates them and hinders that mission.

Moreover, this guidance fails to take into account the unique circumstances of the current political landscape in the United States and the moral response those circumstances require.

I call for a public discussion in the manner you deem appropriate, concerned that efforts to address these issues are consistently met, both in public and in private, with a refusal to engage the questions on their merits. Those questions are met instead with an appeal to discipline rather than dialogue, and to authority rather than reason. While maintaining the utmost respect for the legitimate authority you exercise among the faithful, it’s time to give a bit more attention to a robust discussion of the reasons behind the decisions that authority hands down in matters related to the political involvement of the faithful. Nobody in the Church, including bishops, should be impervious to input, advice, and criticism based on the expertise the faithful possess in various disciplines (cf. Lumen Gentium, 37).

Since 1994, my own ministry team, which embodies a wide range of pastoral and political experience, has addressed our national elections, seeking to articulate and apply the teachings of the Church to the political realm.

We affirm the teaching of Gaudium et Spes which states, “Christ, to be sure, gave His Church no proper mission in the political, economic or social order. The purpose which He set before her is a religious one” (42). Yet as you well know, that statement provides the context for a vigorous exposition of the Church’s responsibilities to shape temporal realities in accordance with the Kingdom of God. In articulating those responsibilities, that same document of the Council goes on to state, “At all times and in all places, the Church should have the true freedom to teach the faith, to proclaim its teaching about society, to carry out its task among men without hindrance and to pass moral judgments even in matters relating to politics, whenever the fundamental rights of man or the salvation of souls requires it” (76; see also Compendium of the Social Doctrine of the Church, 426; Catechism of the Catholic Church, 2246; “Doctrinal Note On some questions regarding the participation of Catholics in political life,” CDF, November 24, 2002, and Code of Canon Law 747  §2).

In a book I wrote in 2015 (Abolishing Abortion, Thomas Nelson publishing), I document extensively the manner in which that duty of the faithful, both clerical and lay, to “pass moral judgments even in matters relating to politics,” has been hindered by the kind of guidance that dioceses, Catholic Conferences and the USCCB routinely issue. When, as expressed in many of the diocesan memos I quote, the faithful are told not to “engage in any political activity which seeks to support or discredit any political party or candidate” (p.117) one wonders how the moral judgment in matters relating to politics is to be expressed.

The public dialogue I am urgently inviting you to engage in at this time is based on the fact that we are not dealing with normal “political disagreements” in this election. If what divided the political parties were matters merely of prudential judgment, or policy disagreements that should be worked out by open debate, trial and error, and the corrective processes provided by our legislative, executive, and judicial mechanisms, then the official neutrality of the Church could be easily understood and implemented.

But that is not where we are right now.

We do not have a division simply on policy, but on principle. Our political divide is not simply about prudential judgments, but about ‘the fundamental rights of man’ and ‘the salvation of souls’ referred to by the Second Vatican Council, the Catechism, and numerous other sources.

When the Republican Party stands firmly for the principle that government cannot authorize the killing of babies, and the Democrat Party firmly rejects that principle by embracing unrestricted abortion, how is it possible for the Church “to proclaim its teaching” without discrediting (implicitly if not explicitly) the political party that so obviously opposes that teaching? As you well know, St. John Paul II called governments that legalize abortion “a tyrant state” (EV, 20). That’s pretty discrediting.

How is it possible, moreover, to defend religious freedom, where again, there is a fundamental difference of principle, not just policy, at work in our political divide? My ministry of Priests for Life and I, along with Alveda King who is part of our pastoral team, were joined shoulder to shoulder by the Archdiocese of Washington, the dioceses of Pittsburgh and Erie, the Little Sisters of the Poor, and numerous other Catholic and Christian institutions and apostolates to fight all the way to the Supreme Court for our religious freedom against mandates imposed by a Democrat Presidential Administration.

We won only because of the election of President Trump.

What makes this all the more ironic is that we are living now in a climate where the federal government is not only defending our right to speak and teach freely on the moral dimensions of politics, but is urging us to do so! On May 4, 2017, President Trump issued an Executive Order protecting our religious freedom. He said,

I want to hear from you, and so do a lot of other people. So, you’re now in a position where you can say what you want to say. And I know you’ll only say good and you’ll say what’s in your heart. And that’s what we want from you.…This executive order directs the IRS not to unfairly target churches and religious organizations for political speech. … In America we do not fear people speaking freely from the pulpit. We embrace it. …Under my administration, free speech does not end at the steps of a cathedral or a synagogue or any other house of worship.

This also relates also to the rights of clerics to be politically involved. Canon 287 §2 legitimately affirms of clerics, “They are not to play an active role in political parties or in directing trade unions unless, in the judgement of the competent ecclesiastical authority, this is required for the defense of the rights of the Church or to promote the common good.”

While the first part of that canon is vigorously enforced, the second part requires due attention as well. The rights of the Church and the common good are under attack in unprecedented ways by the Democrat Party. But again, after being told to defend those goods, we are left to fight with two hands tied behind our backs and a gag over our mouths bearing an episcopal seal.

In calling for more open and respectful dialogue, I speak for many priests and lay faithful with whom I have worked side by side for decades in the fight for life and religious freedom, and whose commitment to these causes has all too often been met with criticism rather than appreciation by the pastors of the Church. Indeed, even attempts to address the matter like I am doing in this letter are often met with unwarranted disciplinary action that appears to be motivated not by a concern for the good of the Church but by the very types of partisan political agendas that clerics are warned not to pursue.

I speak also on behalf of our brothers and sisters in other Christian denominations who are strong allies in the fight for life, family and freedom. Unfortunately, while they have courageously defended the freedom of churches to preach the Gospel and “to pass moral judgments even in matters relating to politics,” they have found much of the response from Catholic religious leaders to be disheartening.

Your Eminences and Excellencies, as I said at the outset, I write with deep respect. I am a son of the Church and have always defended her legitimate authority and prayed daily for her leaders. But this is an appeal to engage in a dialogue that the circumstances of the moment call for most urgently. The approximately 100,000 political races that comprise “the 2020 Elections” bring us to an unprecedented choice in America. Never has the political divide been more substantial or consequential.

This election is not business as usual, and therefore I have written to you publicly. Many of the faithful, and I, respectfully await a response from you that is likewise more than business as usual.