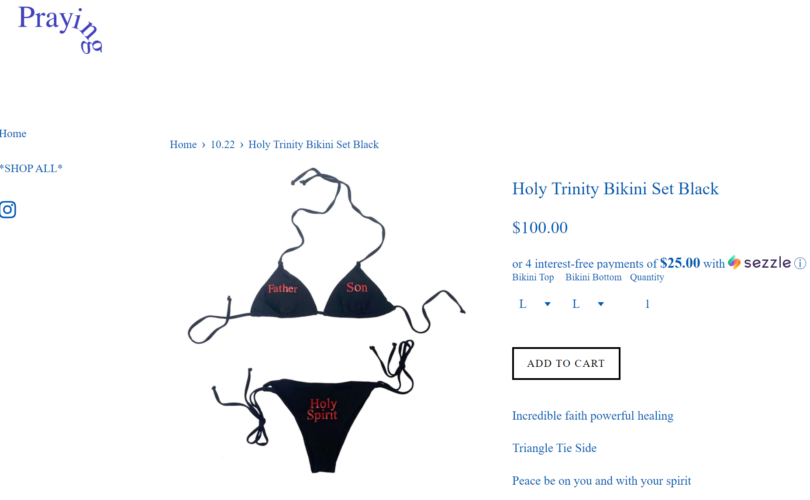 (LifeSiteNews) – A top social media influencer triggered outrage after she shared a provocative snapshot of herself in a “Holy Trinity bikini.”

Addison Rae, 21, a popular TikTok “personality,” posted a since-deleted picture of herself to Instagram wearing a bikini inscribed with the names of the Persons of the Holy Trinity: “Father” and “Son” on the triangle tops, visible in the photo.

“Holy Spirit” is written on the bottom of the bikini, as seen on the website Prayying.com, where the swimsuit, created in collaboration with Adidas, can be purchased for $100.

While many praised the photo and the swimsuit as a “slay,” others slammed her post as “blasphemous” and “disrespectful.”

“Nah this disrespectful to Jesus. Sad what y’all do for money,” one person remarked, according to Fox News.

One comment highlighted the common double standard whereby public figures freely disrespect Christianity in ways they do not dare try with other religions.

“Y’all saying she slayed but if it had something to do [with] any other religion y’all would be pressed,” noted one TikTok user on a commentary/repost of the photo after it was removed.

Another remarked, in a much-liked comment, “[I don’t know] y’all if this was done to my religion i’d be kinda heated.”

Others observed that Adidas should be criticized as well for helping to create the swimsuit. According to International Business Times, one suggested, “[People] should be mad at Adidas.” Another asked, “Shouldn’t Adidas also be receiving backlash?”

Rae is currently one of the most followed social media influencers, with 88.5 million TikTok followers, and 40.1 million Instagram followers. Many of her videos and photos revolve around provocative poses and reels that amount to soft-core pornography.

Last year, Rae released a debut single called “Obsessed,” in which she “explicitly admits to her own narcissism,” according to The Federalist.

“I’m obsessed with me as much as you. Say you’d die for me, I’d die for me too” is the chorus of the song, reportedly based on a real-life conversation she had with her ex-boyfriend.