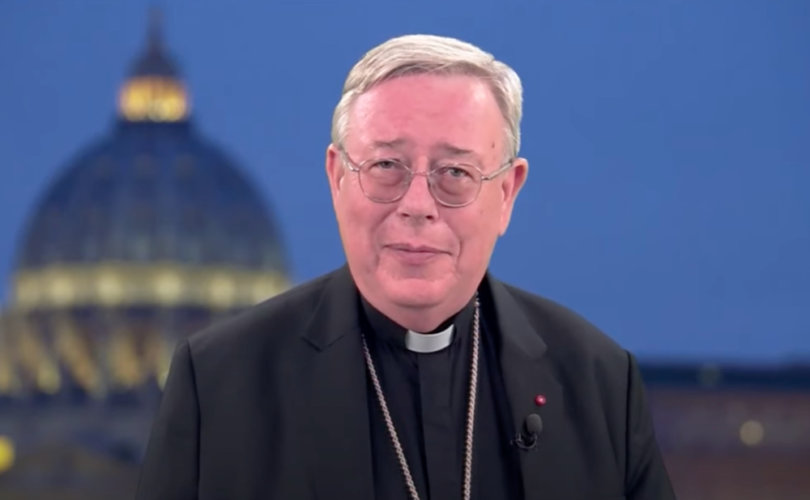 VATICAN CITY (LifeSiteNews) – Cardinal Jean-Claude Hollerich, the relator general of the Synod on Synodality, has called for a “change of cultural paradigm” regarding the Church’s condemnation of homosexual activity and said that there is a “higher” percentage of homosexuals in “Church institutions” than in civil society.

Hollerich made his comments in a lengthy interview given to L’Osservatore Romano, the Vatican’s daily newspaper. Speaking extensively about the Synod on Synodality, Hollerich first praised Pope Francis for being “not a liberal” but rather “a radical.”

Francis’ radicality is his “mercy,” attested Hollerich, adding that “we all must ask ourselves what it means to be Christians today.”

“This question is also the key to this pontificate: to accept the inadequacy of a pastoral ministry that is the daughter of past epochs and to rethink the mission,” said Hollerich. “A choice that has heavy and courageous theological implications.”

One of the ways this will be evidenced is in the “the balance between the laity and the clergy,” which “will be very different in the future from the current one,” said Hollerich, saying this will be “both due to the outcome of this Synod and due to the reduction of vocations.”

Attitude on homosexuality in the Church must change

Hollerich also addressed the topic of same-sex “discrimination” saying that the Church needed to “change” the culture surrounding its approach towards homosexuals to be a more favorable one.

When asked about the example of Protestant churches – who despite promoting same-sex blessings, have not found fresh support among the young – Hollerich replied “of course not. Because that’s not enough.”

Instead, he said that for the Catholic Church, “a deeper change of cultural paradigm is needed, and a conversion of the spirit.”

Making the Church more open to homosexuals, said Hollerich, “is not a problem of canon law, norms or structures. This is what the Pope said to the German Church.”

“Announcing the Gospel today means announcing the joy of life in God, finding the meaning of life in Jesus Christ,” said Hollerich, arguing that “living in the footsteps of Christ means living well, it means enjoying life.”

Continuing his theme, Hollerich outlined his interpretation of the Gospel command to preach the “good news.”

— Article continues below Petition —
Join Bishops in calling out Pope Francis' statement for contradicting the faith
Show Petition Text
5973 have signed the petition.
Let's get to 6000!
Thank you for signing this petition!
Add your signature:
Show Petition Text

“We are called to announce good news, not a set of rules or prohibitions,” said the cardinal, who is also the Archbishop of Luxembourg and president of the Commission of the Bishops’ Conferences of the European Community (COMECE).

Expanding on the theme of an “inclusive” Church, often promoted by Pope Francis, Hollerich stated that “everyone is called.”

“No one excluded: even remarried divorcees, even homosexuals, everyone,” he added, saying that the “Kingdom of God is not an exclusive club.” Instead, he described it as opening its doors “to everyone, without discrimination.”

Sometimes there is discussion in the Church about the accessibility of these groups to the Kingdom of God, and this creates a perception of exclusion in a part of God’s people. They feel excluded, and this is not right! This is not about theological subtleties or ethical dissertations: this is simply about affirming that Christ’s message is for everyone!

The key Synod cardinal also added that he supports the argument that homosexuality is a “fruit of creation,” adding that “at every step of the creation God is pleased with his work.”

READ: Pro-LGBT cardinal claims the Church would be a ‘small sect’ without Vatican II

The cardinal offered some support to same-sex “marriage,” saying that while there is “no procreative end that characterizes it,” “this does not mean that their emotional relationship has no value.”

When pressed about the recent decision of the Belgian bishops to publish an order of blessing for same-sex couples, Hollerich downplayed the news. “Frankly, the question does not seem decisive to me,” he declared.

Subsequent media reports have since stated that Hollerich made this comment with reference to the Congregation for the Doctrine of the Faith’s March 2021 responsum condemning same-sex “blessings.”

“Do you think God could ever ‘dire-male’ [bad-mouth or curse] about two people who love each other?,” he questioned, appearing to suggest that homosexuals could express actual “love”

More homosexuals in Church than in society

Continuing, Hollerich made a confusing remark, seeming to indicate both a high number of homosexuals within the Church and his approval of this fact.

“I would be more interested in discussing other aspects of the problem,” he said, referring to what the problem he perceives of non-acceptance of homosexuals within the Church.

For example: what is the conspicuous growth of homosexual orientation in society driven by? Or why is the percentage of homosexuals in Church institutions higher than in civil society?

Hollerich himself is known for his public support of the homosexual movement. Earlier this year he described as “false” the Church’s denouncement of homosexual acts as sinful. He added that there are “homosexuals among my priests” in his Archdiocese of Luxembourg. “I have homosexual women and men among the laity,” he added, “and they know they have a home in the Church.”

Hollerich called for a “change” in Church teaching on homosexuality, which comes on top of his openness to ordaining women to the sacred priesthood and opening Holy Orders to married men.

In August, Hollerich then claimed that his thoughts on homosexuality were “in full agreement with Pope Francis.” But only weeks later, he told LifeSiteNews that “I’m not in favor of changing any doctrine.” Instead, he said he was in favor of “a Church in which everybody can feel welcome.”

This is echoed by the Catechism of the Catholic Church, which teaches that: “‘homosexual acts are intrinsically disordered.’ They are contrary to the natural law. They close the sexual act to the gift of life. They do not proceed from a genuine affective and sexual complementarity. Under no circumstances can they be approved.” (CCC 2357)