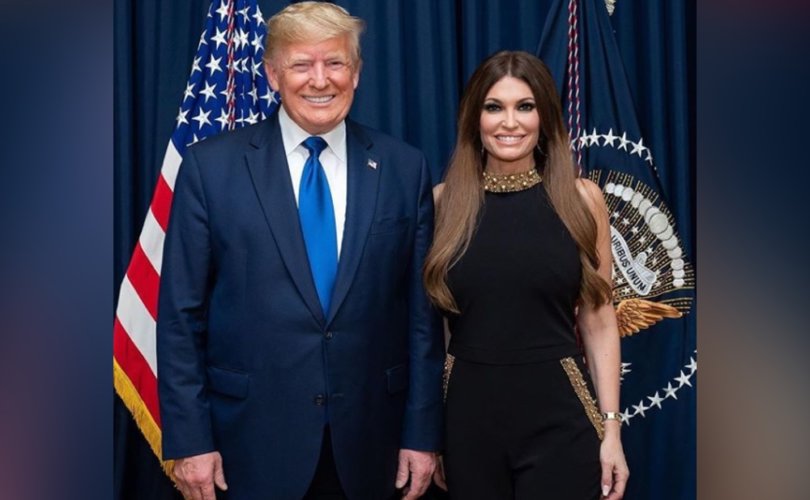 July 23, 2020 (LifeSiteNews) – A top fundraiser for the Trump campaign who is the ex-wife of California Democrat Governor Gavin Newsom is urging Catholics in a campaign video for Trump’s reelection to “call out” Democrat governors who have shuttered Churches, denying Catholics Mass and Holy Communion.

“Democrat governors all around the country have taken away your right to receive Communion.  Catholics should not have to sacrifice their right to practice their religion,” said Kimberly Guilfoyle, a former co-host of Fox’s The Five.

“My ask for you as a Catholic is: Continue talking about these assaults on our Christian faith, and make them known. Call out the perpetrators.  Call out the governors who deny you Mass.  Do not be silent.  Stand up publicly for your faith because together the silent majority will reign.”

In a short video made public today by “Catholics for Trump,” Guilfoyle, who is the current girlfriend of Donald Trump Jr., did not mince words in describing the ongoing physical assaults against Catholic property in the U.S. and the actions of liberal politicians preventing the faithful from receiving the Eucharist.

“Around the world, the Catholic Church is under fire.  Literally,” stated Guilfoyle in her video plea.

“There have been three thousand attacks throughout Europe in which churches have been destroyed, burned, and vandalized.  Most alarming, it is happening right here in America,” said Guilfoyle. “This week, a statue of Christ was toppled and beheaded in Miami.  In Colorado, a statue of the beloved Virgin Mary was defaced with red paint,” said Guilfoyle.  “The list goes on.”

“Do you know where this kind of thing happens frequently?” she asked.  “Communist China, a country that openly persecutes Christians.”

“Freedom to practice our faith is a founding principle of our country,” said Guilfoyle.   “President Trump through his four years in office has been a fierce defender of Christianity and our right to practice openly here and around the world.”

“The Democrats who claim to be staunch defenders of human rights feel comfortable denying you this most sacred right we have as Americans,” she noted.

“The President will continue fighting for us, but he cannot do it alone,” she continued.  “Today, we need to come together and fight for our faith harder than we ever have before.”

“Catholics understand that receiving the Eucharist every Sunday is an essential part of the faith.  It is the Body and Blood of our Savior, Jesus Christ,” declared Guilfoyle.

“My ask for you as a Catholic is:  Continue talking about these assaults on our Christian faith, and make them known.  Call out the perpetrators,” urged Guilfoyle.  “Call out the governors who deny you Mass.  Do not be silent.  Stand up publicly for your faith because together the silent majority will reign.”

“This November will decide the fate of America.  And I hope I can count on you to help keep Donald Trump in the White House,” she concluded.

Former Congressman Tim Huelskamp who now serves on the “Catholics for Trump” advisory board told LifeSiteNews that Guilfoyle is right on target with her remarks.

“Catholics want to go to communion.  They want to receive the Eucharist,” said Huelskamp. “Governor Wolf in Pennsylvania, Governor Walz in Minnesota, and Governor Whitmer in Michigan, make it hard if not impossible for Catholics to do so.”

“The level of anti-Catholic activity being conducted by the left, right now, is shocking,” added Huelskamp.

“The attacks on Catholic places of worship and Catholic symbols of worship are extraordinary,” said Ed Martin who also serves in an advisory position with “Catholics for Trump” and is a member of the pro-life coalition for the Trump campaign.

“If you’re Catholic, you feel it,” said Martin, “and the failure of the media to cover it has meant that the policymakers and the leaders have been able to dodge” addressing the attacks.

Complicit Clergy has provided an interactive map online to keep track of attacks on Catholic statues, parishes and persons in North America this year.  The new project already lists over 50 incidents in the United States and Canada. Readers can click on each pin on the map to find out more about the incident.

LifeSiteNews has reported in detail on a great number of acts of vandalism, carried out not only against Catholic churches, but also other Christian houses of worship, and which seemingly occurred with increasing frequency in recent weeks.