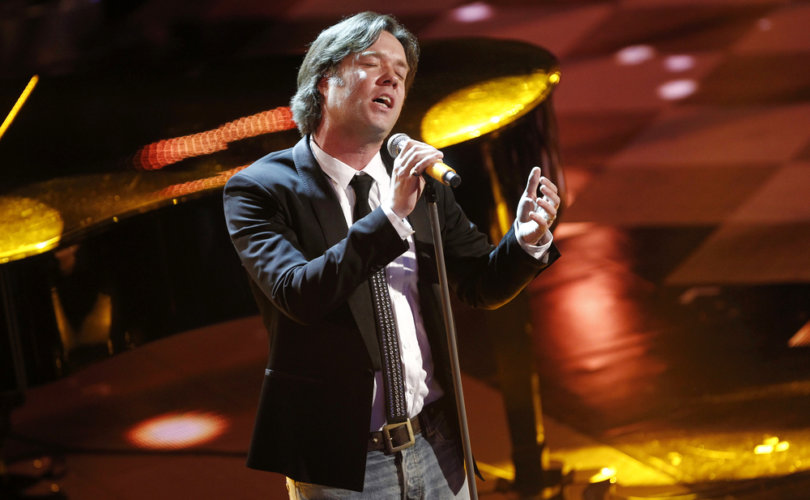 Rufus Wainwright sings at a concert in Italy in 2014.Shutterstock.com

MINNEAPOLIS, December 8, 2017 (LifeSiteNews) – A classical musician walked off the stage after a pop singer mocked a Christmas carol and criticized Republicans in the U.S. Congress.

Manny Laureano, Principal Trumpet for the Minnesota Orchestra, made the silent protest during a Rufus Wainwright concert in Minneapolis’ Orchestra Hall on the evening of December 2. Wainwright, who is in a same-sex “marriage” and is known for voicing his left-wing political opinions at shows, was complaining about the Republicans’ tax plan, which had passed in Congress the night before.

The speech was part of Wainwright’s introduction to his famous protest song “Going to a Town.” The song contains the refrain “I’m so tired of America”, and refers to Christian teachings concerning sexual sin:

Tell me, do you really think you go to hell for having loved?
Tell me, and not for thinking everything that you've done is good.
I really need to know, after soaking the body of Jesus Christ in blood.
I'm so tired of America…

According to the Minneapolis Star Tribune, Wainwright told the audience that passage of the tax plan was “a call to arms”, and that he and they had “to fight for this country.”

In response, Laureano swung his arm in exasperation, put down his trumpet, and silently left the stage through a back exit. There was no reaction from the conductor or the rest of the orchestra, who continued the concert without him.

Laureano told a reporter that he was already annoyed with Wainright because the singer had “mocked” the performance of a Christmas carol, “Cantique de Noël”, known in English as “O Holy Night.” Wainwright had voiced reluctance to sing the hymn at all, saying “One of the requirements for this evening’s performance was I had to do a Christmas song.” The singer made fun of the English translation he had been given and sang only the French lyrics.

“The evening was already too snarky,” Laureano told the Star Tribune. “It got incredibly self-indulgent.”

“He’s an angry dude that seems to have life all figured out,” the musician continued, “not the kind of guy we need to look to for philosophy.”

“I found it to be beyond the pale of what that evening should be about. It’s a time of the year we’re supposed to all come together.”

The concert had been billed as part of the Minnesota Orchestra’s holiday line-up.

So far the Juilliard-trained trumpeter, who has played with the Orchestra since 1981, has not been disciplined or penalized for his quiet protest.  He doesn’t rule it out, however.

“Obviously my contract says I’m not supposed to walk off stage during a performance,” Laureano admitted.

He contacted his colleagues in the orchestra afterwards to apologize for “leaving them at a disadvantage.”