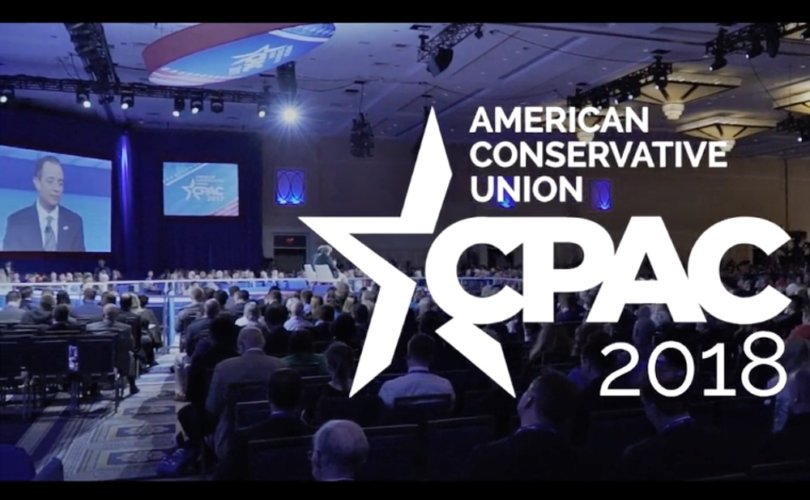 In a stinging statement issued by MassResistance in response to CPAC “banning” the group, founder Brian Camenker asked, “Is the ‘Conservative Political Action Conference’ really conservative?”

CPAC had officially approved MassResistance for a table in January, but last week CPAC Executive Director Dan Schneider notified the organization that it had been disinvited.  CPAC justified its decision citing the group’s Biblical approach to fighting the culture war — particularly the transgender agenda in public schools — as described in a 2015 speech by MassResistance president Brian Camenker.

With the departure of MassResistance from the exhibitor’s hall roster, no exclusively pro-family, pro-marriage groups were to be present at CPAC.

“For the past three years — including this year — the radical homosexual group Log Cabin Republicans (LCR) has been a sponsor and exhibitor at CPAC,” explained Camenker. “Prior to that, another homosexual group called GOProud was an official exhibitor in 2009 and 2010.”

“LCR pushes hard to homosexualize the Republican Party and have LGBT officials and judges appointed,” continued Camenker. “They fight for LGBT ‘anti-discrimination’ laws that are used to punish Christian businesses. They’ve pushed hard to force open homosexuality – and recently transgenders – into the U.S. military. They placed an ad in USA Today to strongly denounce the 2016 GOP platform committee for supporting traditional marriage. They brag that they are ‘creating change.’”

It’s not only the presence of pro-gay and transgender groups at CPAC that worries the MassResistance founder.

“In 2016 and 2017 the group Atheist Voter had a table at CPAC,” said Camenker. “In 2015, its parent organization, American Atheists, was granted a main stage speech.  The group pushes for God-less government policies, removal of ‘Christian ideology’ from all government, repeal of religious exemptions from onerous LGBT laws, and more reporting requirements on churches. They also support the LGBT agenda, abortion ‘rights,’ and are ‘fighting abstinence-only until marriage sex education.’”

“It is unconscionable that a self-styled conservative organization like CPAC would ban a sponsorship table for a leading pro-family group like MassResistance––while allowing the homosexual activist Log Cabin Republicans to sponsor a table at the same conference,” said Peter LaBarbera, founder and president of Americans For Truth About Homosexuality (AFTAH) in a statement to LifeSiteNews.  Interestingly, the precursor of AFTAH was launched at a CPAC gathering 25 years ago.

“This is upside-down,” continued LaBarbera. “It is Log Cabin Republicans, which crusades for homosexual 'marriage,' that is undermining conservatism. I call on CPAC and its CEO Matt Schlapp to reverse this awful decision.”

“Brian has been fighting the radical gay and transgender agenda for decades, and has never wavered. He certainly deserves better than to have his good name sullied and his group expelled by CPAC.”

“CPAC needs to stop pandering to LGBTQ advocates and make this right. Banning pro-moral voices is a tactic of the Left, not the Right,” he added.

After MassResistance publicized its ouster from CPAC, AFTAH immediately submitted a request for a booth at CPAC.  CPAC’s decision is still pending.

“The American Conservative Union (ACU) — CPAC’s parent organization — is over fifty years old,” said Schneider.  “I don’t know if there have ever been more pro-life, pro-family social conservatives” than our founders, and our leaders today as well.

“There are organizations we are closely aligned with philosophically but which don’t necessarily meet all our eligibility requirements” for representation in our exhibitors hall, according to Schneider.

Schneider indicated that CPAC had deemed some of the language used by MassResistance in the past as “insulting and disrespectful” when speaking about the LGBT community. “Groups which would use similar language about other minority groups would be disallowed as well.”

When pressed about whether or not someone wandering through the CPAC exhibitor’s hall would come away with the impression that it promotes a more libertarian than social-conservative ideology, Schneider pointed to the presence of groups like the Heritage Foundation, Americans United for Life (AUL), the American Principles Project, and — late entry — the Family Research Council, all of which will have booths.

While those groups are undoubtedly socially conservative, they are not as focused against the “gay agenda” as MassResistance, and tend to be more academic in their stances and less likely to use the language of the grassroots in their argumentation and educational efforts.

Asked if he is happy with the Log Cabin Republicans’ continued presence at the upcoming CPAC gathering, Schneider replied, “If they meet our eligibility requirements, they are fine.”

Lingering Question: What is CPAC and where is it going?

The annual CPAC event in Washington, DC has been a very big deal for conservatives since its inception, attracting thousands of conservative-minded people from across the country each year. It’s where Republican candidates and other major conservative political figures come to speak and be seen – everyone, from Presidents Ronald Reagan to Donald Trump; Conservative Senators like Ted Cruz and Marco Rubio; and media icons such as Rush Limbaugh, Sean Hannity, and Mark Levin.

Sponsored by the American Conservative Union (ACU), the annual conference has been an important presence in Washington since 1973. According to its website, ACU has served for more than fifty years “as an umbrella organization harnessing the collective strength of conservative organizations fighting for Americans who are concerned with liberty, personal responsibility, traditional values, and strong national defense.”

Yet focusing on traditional marriage and family structures — the bedrock of social conservative values —seems to have less of a presence in the CPAC agenda, while LGBT ideology is perhaps finding a firmer foothold.

“Similar to the direction of the GOP establishment, in recent years CPAC has become more libertarian-oriented and pro-LGBT – and hardly any pro-family groups have had exhibits or been sponsors. This seems to mesh with the attendees: approximately half are 18-24, and clearly products of modern culture.”

“Is this really what conservatism in America has become?” wonders Camenker. “What group gets to claim it defines conservatism? Is MassResistance the only pro-family group that’s publicly standing up to the powerful sexual-radical movement?”