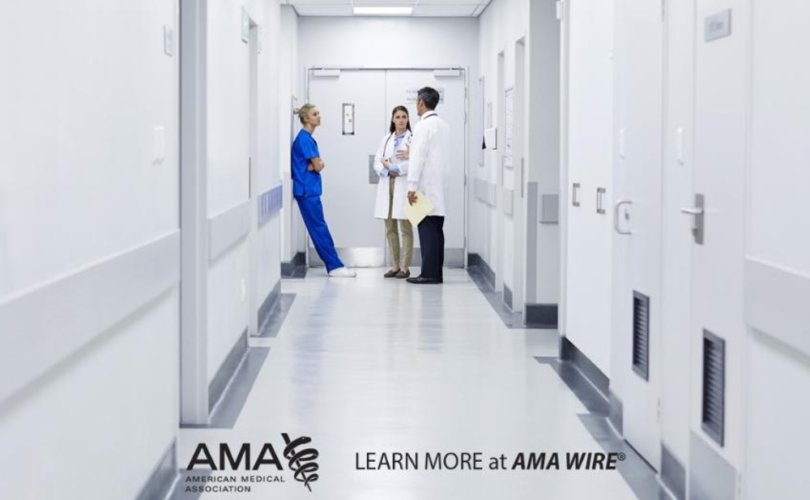 CHICAGO, June 15, 2018 (LifeSiteNews) – The American Medical Association (AMA) declined to reaffirm its longstanding opposition to doctor-assisted suicide this week, instead voting to study the question further.

The vote came at the group’s annual meeting in Chicago, local PBS affiliate WTTW reports. The AMA is the largest association of physicians in the United States, representing about 240,000 physicians, and has opposed doctor-assisted suicide since 1993.

The group currently condemns the practice as “fundamentally incompatible with the physician’s role as healer,” and warns that it “would be difficult or impossible to control, and would pose serious societal risks.”

An ethics panel recommended that the language be kept following a previous two-year study. But approximately 56 percent voted against adopting the recommendation, and instead decided another study is needed to settle the language’s ultimate fate.

While the vote is not a final decision on a policy change, observers say the writing is on the wall. “The mere fact that they're considering it again tells you that it's a changing climate,” New York University School of Medicine bioethics professor Art Caplan told Governing Magazine.

Several state and district AMA affiliates have dropped their opposition to assisted suicide in recent years. Dr. David Grube of the pro-euthanasia lobbying group Compassion & Choices cited those affiliates as evidence the national organization should defer to the lack of “clear consensus among AMA members.”

Patients’ rights advocates emphatically disagree. Helping patients kill themselves is the “antithesis of why you want to become a doctor or a healer,” AMA delegate and Massachusetts Medical Society president Dr. Thomas Sullivan told the Post Bulletin. He cited the Hippocratic Oath on which modern medical ethics are founded.

“I will neither give a deadly drug to anybody who asked for it, nor will I make a suggestion to this effect,” reads the classical oath. “Similarly I will not give to a woman an abortive remedy. In purity and holiness I will guard my life and my art.”

Matt Vallière, executive director of the Patients’ Rights Action Fund (PRAF), called the vote a “lost opportunity and a failure to stand against a policy that has grave consequences for everyone, but especially persons living with illness, disabilities, or socioeconomic disadvantage.”

National Catholic Bioethics Center director of ethics and public policy Marie Hilliard also lamented the vote, but took solace in the fact that the AMA didn’t endorse assisted suicide yet, giving pro-life and disability-rights activists more time to work toward the right outcome.

“People like myself feel this pressure when our needs cannot be met, and we would not be able to live for six months without medical help,” Diane Coleman, leader of the national disability rights group Not Dead Yet, told The Daily Signal in an interview. “As a result, it could feel like the only way to deal with unmet health care needs is to die. So it becomes a duty to die, not a choice.”

Coleman’s perspective is unique, as she is not only an activist but a patient who stands to be directly affected by the outcome. She has a neuromuscular disability that requires frequent use of an oxygen mask.

Coleman highlights two particular dangers of allowing assisted suicide, both of which suggest the decision to die will not truly be the patient’s own in some cases.

“There is a sense of no questions being asked—or even a counseling option,” she told the Signal. “There are no independent witnesses required when lethal drugs are ingested, and no one to protect the elderly when their families want to use physician-assisted suicide for them.”

In a joint statement, Coleman and Marilyn Golden of the Disability Rights Education and Defense Fund also warned that merely opening up the option will corrupt the incentives of hospitals and insurance companies.

“If insurers deny, or even merely delay, expensive life-saving treatment, the person will be steered toward assisted suicide. Will insurers do the right thing, or the cheap thing?” they asked.

Assisted suicide is currently legal in Colorado, Oregon, Vermont, Washington state, and the District of Columbia. In Montana, the state Supreme Court ruled that state law did not expressly prohibit it, and earlier this month a judge invalidated California’s law permitting assisted suicide on the grounds it was unconstitutionally enacted.  Assisted suicide will become legal in Hawaii starting next year.