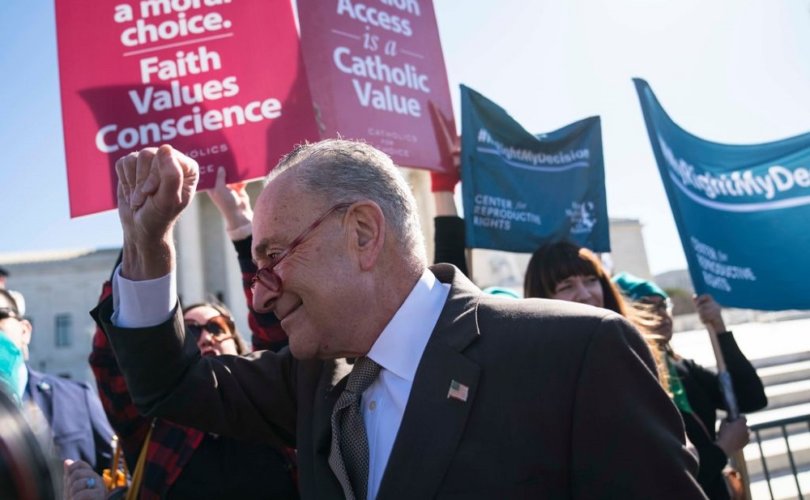 “And they’re taking away fundamental rights. I want to tell you, Justice Kavanaugh and Justice Gorsuch: You have unleashed a whirlwind, and you will pay the price,” Schumer shouted to the cheering crowd. “You won’t know what hit you if you go forward with these awful decisions.”

“As the highest ranked Democrat in the Senate, it is intolerable that Schumer would issue direct threats by name to two Supreme Court Justices if they did not vote his way on this case,” said Troy Newman, President of Operation Rescue. “I call on Chuck Schumer to resign. Anyone who can make those kinds of direct and intimidating threats against the nation’s highest court is not fit to serve, and probably belongs behind bars.”

After Schumer’s remarks, Chief Justice John Roberts issued a rebuke to Schumer, saying in a statement, “Justices know that criticism comes with the territory, but threatening statements of this sort from the highest levels of government are not only inappropriate, they are dangerous.”

“In all the contentious cases that have come before the Supreme Court, it is not a coincidence that an abortion case would prompt such alarming conduct. Abortion is central to the Democrat’s subversive plans for America, and they obviously will stop at nothing to protect it,” said Newman.

“I would call on Schumer to apologize, but we all know he has no shame. So tomorrow I will introduce a motion to censure Schumer for his pathetic attempt at intimidation of #SupremeCourt,” Hawley wrote in a post on Twitter.com.

I would call on Schumer to apologize, but we all know he has no shame. So tomorrow I will introduce a motion to censure Schumer for his pathetic attempt at intimidation of #SupremeCourt

“We support Sen. Hawley’s motion to censure Schumer, but in addition, Operation Rescue calls on the Department of Justice to investigate Schumer and his threats as crimes,” said Newman. “When a man called our office and threatened to do us harm because we did not comply with his demands, he was arrested and is now serving time in Federal Prison. If there is to be equal justice, Schumer should not be held above the law.”