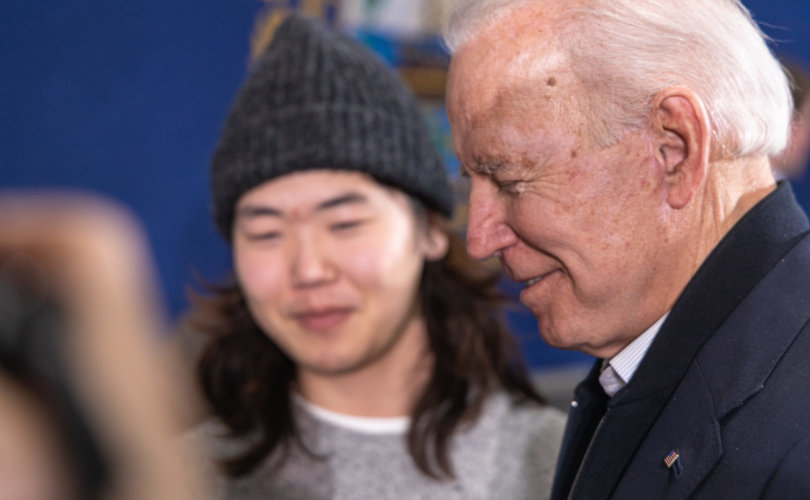 July 24, 2020 (LifeSiteNews) – As the November presidential election swiftly approaches, Democrat Joe Biden is looking for ways to exploit his association with Catholicism to, in the words of an Associated Press report, “claim the moral high ground” in order to “chip away at Trump’s base by appealing to pockets of conservative faithful.”

“Joe Biden is a different kind of foe than Trump has faced before: one who makes faith a central part of his persona — often literally wearing it on his sleeve,” asserted an Associated Press (AP) report published by mainstream media outlets across the country.

Yet Biden’s faith — which allows him to declare that abortion is an ‘essential healthcare service;” to assert that if elected he will resurrect Obama-era policies that would force the Little Sisters of the Poor to violate their religious beliefs and provide contraceptives and abortifacients to their employees; to personally conduct gay weddings; and to support the overtly marxist Black Lives Matter (BLM) movement that seeks to disrupt the nuclear family — is completely foreign to vast swaths of Catholics.

‘Biden should not even try to receive Communion’

Fr. Frank Pavone, national director of Priests for Life, said Biden’s “failure to protect the unborn puts him not only in conflict with the Catholic faith but with the Christian Gospel, the Founding principles of America, the very meaning of public service, and basic human decency. You can’t kill babies, and you can’t authorize anyone else to do so.”

“This leads to the conclusion that a person like this should not even try to receive Communion,” Fr. Pavone told LifeSiteNews. “In fact, he doesn’t want to, because to exclude the unborn is to exclude Christ; so you may want ‘Communion,’ but you don’t want actual union with Jesus.”

“Moreover, if one claims to believe the Church in saying the host is the Body of Christ, how can one not believe that same Church when she says the unborn is a person worthy of protection? The latter is easier to understand than the former,” Pavone declared.

“Joe Biden has already, rightfully so, been refused communion,” said Father Stephen Imbarrato, an activist pro-life Catholic priest, a regular on EWTN, and a member of Red Rose Rescues.

Fr. Imbarrato recounted a litany of Biden’s scandalous positions on issues that defy his Catholic faith:

“He is a walking and talking scandal to his Catholic faith and has rightly been refused the Eucharist because he persists in ongoing mortal sin thus separating himself from communion with the Church. He scandalizes the Catholic faith in so many ways that objectively he actually seems “anti Catholic” in his beliefs.”

“Biden is not living as a Catholic,” Fr. Pavone said in a recent video.

“Joe Biden has stubbornly and contumaciously ignored Church teaching on abortion and Religious Freedom,” observed Fr. Michael Orsi, a priest of the Diocese of Camden, New Jersey, who currently serves as parochial vicar for St. Agnes Parish in Naples, Florida, and a former chaplain of Ave Maria School of Law in Naples.

“Accordingly, a 2004 Memorandum from the Congregation for the Doctrine of the Faith, signed by Cardinal Ratzinger, states, ‘a politician consistently campaigning and voting for permissive abortion laws’ the politician’s pastor is to inform him that he should not receive Communion,’” noted Fr. Orsi.

“The failure on the part of most bishops to enforce the sanction is, in fact, more scandalous than Biden’s positions,” Fr. Orsi told LifeSiteNews.

Fr. Imbarrato agrees. “A more concerning potential scandal may be that the U.S. bishops have not forthrightly proclaimed (Biden’s defiance of his Catholic faith) – what every Catholic knows yet half choose to ignore because the bishops have ignored it and remain silent about it.

“The silence of the U.S. bishops about Joe Biden may even a greater scandal than Biden’s idolatry (by which he places his intrinsically evil political agenda before his Catholicism) because a case can be made that he indulges in such scandal and idolatry because of the tacit approval from our shepherds,” Imbarrato told LifeSiteNews.

“First, perhaps the bishops are still reeling from the priest abuse scandals, and are fearful of stirring the anger of politicians who could inflict more damage if elected,” Orsi suggested.

“Secondly, and perhaps even more pernicious than the first, is that many bishops no longer see abortion as the ‘preeminent’ social justice issue,” Orsi said. “They prefer ‘a seamless garment’ approach which places e.g. ‘climate change,’ racism, and capital punishment to be equally important.”

“Lastly, about 40 percent of Catholic Charities’ funding comes from federal and state coffers,” Orsi explained. “The fear of losing this would not only put a further dent into diocesean social outreach but limit the influence of liberal Democrats that inhabit many Church offices.”

“As for voting, not only can Catholics not vote for Biden in good conscience, but they can’t vote for Democrats, period. And neither can anyone else,” Fr. Pavone told LifeSiteNews.

“The devil has made his home among the leadership of the Democratic Party for some time now, and found it a most hospitable environment,” Fr. Orsi wrote in a widely read analysis earlier this year.

“It’s time to stop pretending we can be neutral. The Democrat Party has set itself up against the Church, against the unborn, and against America,” said Pavone. “They do not deserve one ounce of power in this country, and anyone who gives it to them shares the guilt of all the evil they do. And that starts with our religious leaders.”

Do not risk grave sin by voting for Biden

“I encourage every Catholic to read Nos. 2284-2287 on scandal in the Catechism of the Catholic Church and to contact their bishops,” Fr. Imbarrato said.

“Denounce Biden’s scandalizing of our Catholic faith and demand the bishops’ end their current scandal of silence,” he urged. “I am also begging Catholics to not risk the grave sin of scandal by supporting this man with their vote. Thus we would be heaping more scandal upon more scandal upon scandal.”

“Many people respond to my comments with, ‘what about Trump?’ This is not about Trump. Trump isn't even Catholic. This is a Catholic issue. A Catholic can't vote for Biden whether they feel in good conscience they can or can't vote for Trump,” he added.

Catholics are not the only ones scandalized by Biden

At a recent “Evangelicals for Trump” event in Atlanta, high profile attendees such as Dr. Alveda King, Bishop Harry Jackson, and Ralph Reed “condemned Democrat politicians like Joe Biden who have abandoned religious Americans to satisfy the woke mob.”

“President Trump has been a staunch defender of people of faith, and the Evangelical community is fired up and ready to rally behind him in November,” said Pastor Paula White, spiritual adviser to President Trump. “While Joe Biden radically shifts further away from the American values that Christians hold dear, President Trump continues to fight for our religious freedoms and the principles of faith that make our country great.”

The Biden campaign is “using a watered-down, progressive version of Christianity that politely declines to share the Gospel and uses broad, generally spiritual terminology,” explained Elizabeth Johnston, better known as “Activist Mommy,” in a blog posting.

“Biden may be able to woo some nominally Christian voters over to his side, but he certainly has no intention of governing according to the Word of the Lord,” she added.

LifeSiteNews has sought comment from Bishop W. Francis Malooly of the Diocese of Wilmington, Delaware, where Biden resides, but received no response.