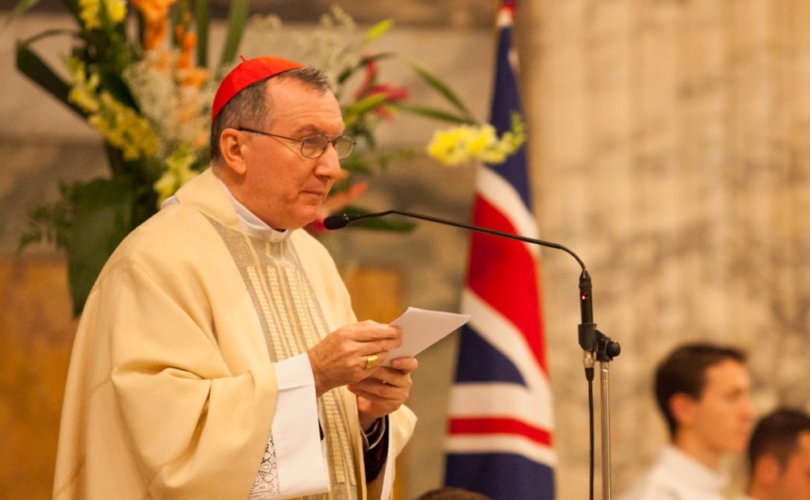 VATICAN CITY, September 21, 2018 (LifeSiteNews) — The Vatican’s highest ranking diplomat is defending an impending deal with China that critics are denouncing as a betrayal of Catholics.

“There is no need to be drastic in condemning and rejecting,” Secretary of State Cardinal Pietro Parolin told reporters Thursday in Rome, according to Reuters.

Chief negotiator for the contentious agreement, Parolin added he hoped the deal will be inked “in the not too distant future.”

That remark is the closest yet to an official confirmation of media reports a Vatican delegation is flying to Beijing before the end of September to finalize the deal, hailed in some progressive quarters as a “ground-breaking” agreement re-establishing diplomatic relations between China and the Holy See after 70 years.

What is known of the secret agreement is that Beijing will acknowledge the pope as head of the Catholic Church in China but have final say in appointing bishops, although the pope has a veto.

The Vatican has also agreed to recognize and consecrate seven illegitimate “bishops” it has previously rejected and who were installed by the Communist-controlled Catholic Patriotic Association.

Moreover, the Vatican has requested two bishops from the persecuted Underground church step down in favour of “bishops” from the Patriotic church.

“We are convinced that this is a step forward,” Parolin told reporters. “We are not so naive as to think that from now on everything is going to go well, but it seems to us that this is the right direction.”

Parolin, a career Vatican diplomat considered a top contender for pope in the next conclave, mentioned no names when he added: “Everyone has the right to think what they want but it has to be done in a respectful way.”

But his remarks come on the heels of Cardinal Joseph Zen of Hong Kong publicly calling the secretary of state to resign over the agreement.

“They’re giving the flock into the mouths of the wolves,” Zen told Reuters in an interview published Thursday. “It’s an incredible betrayal.”

The 86-year-old retired bishop of Hong Kong also questioned Parolin’s Catholicism. “I don’t think he has faith. He is just a good diplomat in very secular, mundane meaning,” Zen said.

“The Communist Party long been determined to force underground Chinese Catholics out of the catacombs so they can be brought under strict Party control,” Mosher, author of Bully of Asia: Why China's Dream is the New Threat to World Order, told LifeSiteNews in an email.

“Why anyone in the Vatican, including Cardinal Parolin, would think it’s a good idea to lend the name of the Pope to their effort in this way is beyond me.”

Zen has long mistrusted Parolin, warning Pope Francis in 2013 that his newly appointed secretary of state had a “poisoned mind” and “believes in diplomacy, not in our faith.”

But Francis nevertheless tasked Parolin with reopening negotiations with Beijing, broken off by Pope Benedict before he resigned.

Parolin, who defended the pope’s controversial document on the family Amoris Laetitia as a “paradigm shift” for the Church, was named by former U.S. nuncio Archbishop Carlo Viganò in his bombshell August testimony.

Viganò alleged Parolin was among the high-ranking prelates who covered up the serial sexual abuse of ex-Cardinal Theodore McCarrick, and gave him positions of influence in the Church.

Indeed, “after the election of Pope Francis,” McCarrick “boasted openly of his travels and missions to various continents,” Viganò wrote.

That included trips to China, most recently in 2016 to meet “old friends,” as McCarrick then told Global Times, a semi-official Communist Party publication.

In fact, the now-disgraced McCarrick “made no fewer than eight trips to China in recent years, the last few at the specific request of Pope Francis, in pursuit of an agreement,” Mosher confirmed to LifeSiteNews.

Mosher, who has elsewhere decried Parolin’s 13-year track record in China as a ruinous series of blunders, says that’s another reason he can’t trust the deal.

“Had the agreement been negotiated by prelates like Cardinal Zen, men who are profoundly and personally aware of the nature of the officially atheistic, one-party dictatorship that rules China, we could have confidence in it,” he told LifeSiteNews.

“But I have no confidence in an agreement that was negotiated by clerics who have zero understanding of China’s recent history of brutally suppressing religion,” or clerics like McCarrick.

“As someone who, over the years, has helped underground Catholics in China build churches and open orphanages, I agree with Cardinal Zen that the proposed deal is a betrayal,” wrote Mosher.

“Actually, it is a betrayal on several levels. It betrays the authority of the papacy by giving the Chinese Communist Party the right to name bishops,” he added.

“It betrays the underground Church in China, a Church which not only has survived decades of persecution at the hands of the authorities but is now, once again, under siege.”

He also blasted the Vatican for keeping the deal secret, which “betrays the Truth” and gives President Xi Jinping, who is cracking down on religious observance, the trump card.

“Whose purposes are being served by signing a secret agreement? Such an agreement keeps Catholics in China and around the world in the dark about whatever compromises the Vatican has made,” observed Mosher.

“It also allows the Communist authorities to misrepresent the agreement to the Chinese faithful in whichever way they choose, using it for their own purposes. Darkness always hates the light.”