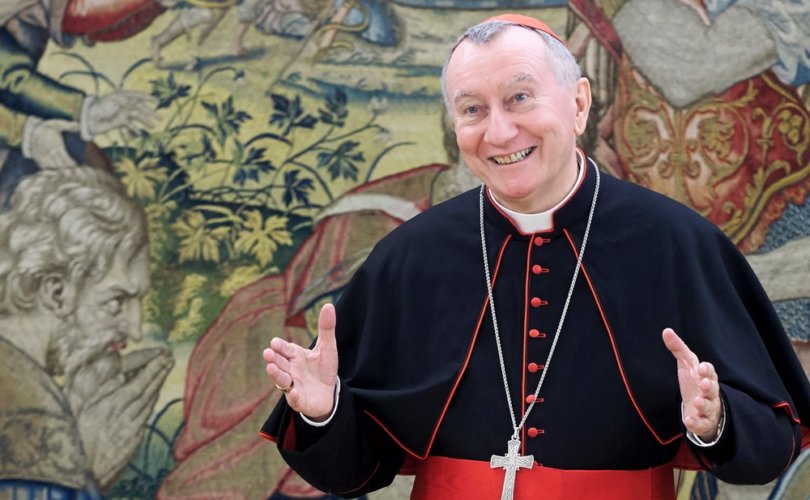 The interview with Cardinal Parolin, the Vatican’s secretary of state, was unprecedented for China and the Global Times, the official newspaper of the communist government. Parolin was interviewed by journalists Francesco Sisci and Zhang Yu. In the exchange, Parolin indicated what may be the intentions of the September 2018 agreement between the Holy See and Beijing, saying it is for “the benefit of the entire Chinese Catholic community, which I embrace fraternally — above all those who have suffered most and continue to suffer[.]”

Relations between the Holy See and China have been hampered by China’s persecution, torture, imprisonment, and murder of Christians and Catholic priests and prelates. To counter the influence of the Vatican, China created the Chinese Patriotic Catholic Association, which is not in communion with the pope and appoints its own bishops and priests. Catholic clergy and laity who are faithful to the pope have operated in secret in what has been termed an Underground Church. The Chinese government has imprisoned those suspected of involvement in the Underground Church, as well as congregations of other Christians of so-called “house churches.”

Parolin responded to the journalists’ first question by saying there is “increased trust between the two sides.” The dialogue between the Catholic Church and China, Parolin said, flows from Pope Francis’s desire to avoid debating differences over their respective values. Parolin said that neither side would give up its identity or its respective purpose. He said the Holy See and China “are not discussing theories about their respective systems nor do they want to reopen questions which by now belong to history.” It is “practical solutions,” Parolin said, that the pope is seeking with regard to “the lives of real people who desire to practice their faith peacefully and offer a positive contribution to their own country.”

Parolin addressed the issue of Catholics who have criticized the deal reached by the Holy See and China. These “criticisms,” he said, “may arise in the Church or in China or from elsewhere.” It should come as no surprise, said Parolin, that criticism emerged “after such a long period of confrontation.” He urged respect to be shown to critics, saying “it seems to me human and Christian to show understanding, attention and respect for those who express such criticism.” However, he said that “criticisms which come from prejudiced positions and which seem to seek to preserve old geopolitical balances are another matter.” While Parolin said Pope Francis is “well aware” of recent events, the pontiff’s main interest in the dialogue is “on the pastoral level.” The pope, he said, is showing trust and respect for the people of China and is hoping for “an equally sincere and positive response.”

The Vatican’s top diplomat said, “Many questions still need to be addressed and we are facing them with willingness and determination.” The Vatican is seeking, he said “enduring solutions, which are acceptable to, and respectful of all concerned.”

Later in the interview, Parolin asserted that the pontiff “sees China not only as a great country but also as a great culture, rich in history and wisdom.” The Holy See, Parolin said, hopes  China “will not be afraid to enter into dialogue with the wider world” and “will be able to overcome mistrust and build a more secure and prosperous world.”

Parolin echoed one of the pope’s themes about global issues, saying, “In the words of Pope Francis, we would say that only by being united can we overcome the globalization of indifference, working as creative artisans of peace and resolute promoters of fraternity.”

Regarding possible collaboration between the Holy See and China, Parolin said areas such as “peace, the fight against poverty … migration, the ethics of scientific development and the economic and social progress” are among those that could be addressed. However, he said the “dignity of the human person” and “fundamental rights” including “religious freedom” should be at the center of that collaboration.

Among the critics of the agreement reached by the Holy See and China are members of the U.S. Commission on International Religious Freedom and Cardinal Joseph Zen, the former archbishop of Hong Kong. Zen said the provisional agreement between the Holy See and China on the appointment of bishops is a mistake. The agreement, he said, is being used by the Chinese government to coerce underground Catholics to join the official Chinese Patriotic Catholic Association. Pope Francis, he said, “didn’t get anything from this agreement,” which “made him lose his authority.”