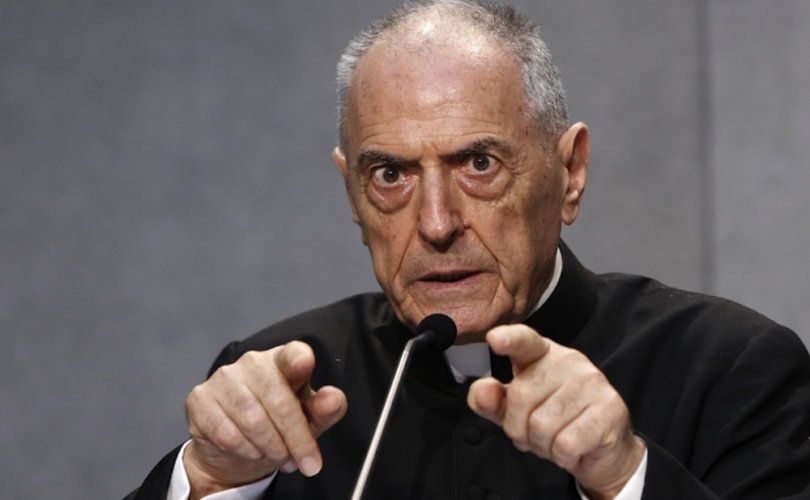 ROME, December 2, 2016 (LifeSiteNews) – The head of the Vatican’s highest appeals court has doubled down on his criticism of the four Cardinals calling for clarification of Amoris Laetitia, telling another news agency that their act amounted to a “slap in the face.”

Msgr. Vito Pinto had called the dubia a “very serious scandal” only days ago, in comments reported by Spanish news agency Religión Confidencial.

Religión Confidencial had originally reported Pinto as also saying that dubia “could lead” the pope to remove the four from the College of Cardinals, but the news agency subsequently retracted and said their tape showed he had said, in fact, that he didn’t believe the pope would do such a thing.

Now the Monsignor doubles his attack on the four Cardinals in an interview published by katholisch.de, the German bishops’ website.

By publishing their letter, “they gave the Pope a slap in the face,” said Msgr. Pinto. “The Pope can receive counsel from his Cardinals, that is something else than forcing a counsel upon him.”

In their letter four Cardinals asked Pope Francis five short questions which call for “yes or no” answers to clarify ambiguities in Amoris Laetitia. After nearly two months of the Pope’s refusing to respond, the Cardinals publicly released their letter with an explanatory note giving the faithful the opportunity to see their grave concerns touching directly on the integrity of the Catholic faith.

Msgr. Pinto remarked that the four Cardinals have no authority to have done this. “They are no institution that is qualified for anything,” he said. One of the signatories of the dubia is Cardinal Raymond Burke who served as Cardinal Prefect of the Supreme Tribunal of the Apostolic Signatura from 2008 to 2014. The Apostolic Signatura is the highest judicial authority in the Catholic Church, apart from the Pope himself.

Pinto went on to say that the Cardinals have to “support” the Pope for the “gift of unity” and not “hinder him” in it. “On what do they base themselves? That they are four Cardinals? That is not enough. Please. Of course they can write their questions, but to urge him to answer and to publish the thing, that is a scandal.”

Pinto began to single out the four, as if they were lone warriors in the face of a vast majority: “The absolute majority of the first synod and a two-thirds majority in the second, in which the members of the bishops’ conferences were present, have exactly approved these theses that now the four Cardinals contest.”

Regarding his threats to remove the four from the Cardinalate, he replied: “I am not the type to threaten. To write something like this was journalistic freedom and not respectable. To think that Francis would remove their cardinalate – no. I do not believe that he will do that. […] In itself, as Pope, he could do such a thing. The way I know Francis, he will not do it.”

Pinto called Cardinal Raymond Burke “crazy,” responding to Burke’s announcement that there will be a “formal correction” regarding the content in question of Amoris Laetitia. “This is crazy. There is no College of Cardinals that could hold the Pope accountable. The task of the Cardinals is to help the Pope in the exercise of his office and not to impede him or to give him instructions. The fact is, Francis is not only in full accordance with the teaching, but also with all of his predecessors in the 20th century, and that was a Golden Age with excellent Popes, starting with Pius X.”

He was especially annoyed with Meisner’s support of the letter: “I am shocked, especially about the gesture of Meisner. […] Meisner a great supreme shepherd! That he would go this far, I would have not expected. He was very close to John Paul II and Benedict XVI. […] And Burke – we have worked together. […] Now I would ask him: ‘Eminence, why have you done this?’”

Pinto’s counsel for the Pope is simple: “Officially this action has no value. The Church needs unity not walls, says the Pope. He will not take the Cardinalate away from the four. We know how Francis is. He believes that men can convert. I know that he prays for them.”