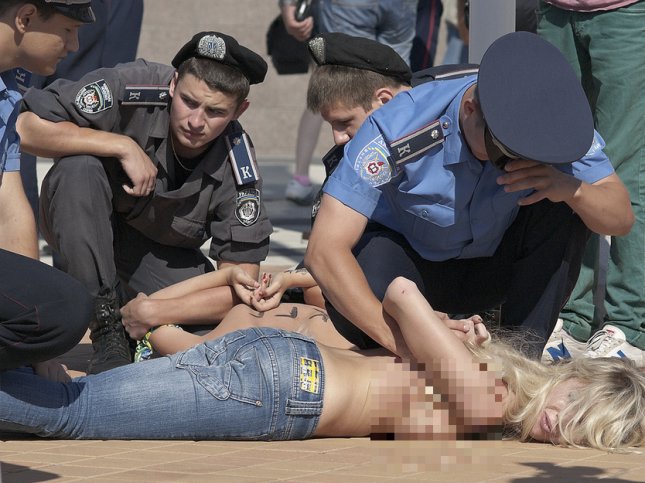 UKRAINE, September 10, 2013 (LifeSiteNews.com) – If the topless protests organized by the radical feminist group Femen – typically featuring skinny, attractive women – have sometimes seemed like a dirty man’s dreams come true, there might be a good reason for that. According to a new documentary, the mastermind behind the group, members of which earlier this year assaulted a Belgian Catholic bishop for his views on homosexuality, was, until recently, a man with a penchant for pretty girls, and a habit of belittling the feminist warriors he led into battle.

Femen, whose slogan is, “Our mission is protest, our weapons are bare breasts”, is famous for staging numerous incendiary protests, such as attacking Archbishop Andre-Joseph Leonard with water, shouts, and curses in April; chanting “Pope no More” in St. Peter's Square at the Vatican; protesting against government plans in Ukraine to outlaw abortion in some circumstances; and chainsawing Orthodox crosses in the wake of the conviction of a Russian punk band.

The revelation of Svyatski's leadership, which has since been confirmed by the group’s current leader, has sparked a furor, generating dozens of headlines in leading newspapers, with some commentators declaring that the group has lost credibility.

Green, who identifies herself as a feminist, spent fourteen months living with four Femen activists, developing a close relationship with them. However, during that time, she says began to have reservations about the way Femen managed itself.

“[A]s I got closer to the girls, that picture became more complicated,” she wrote in a press release about her documentary, titled “Ukraine is not a Brothel.”

She began to question how the group’s “unusual and almost contradictory methods” could make their country a “safer and better place for women.”

When a “slimey Turkish businessman” began using Femen to promote a brand of lingerie, Green realized that she must choose between abandoning her film or “make a film that paints an honest portrait of this movement.”

Green says she chose to be honest.

As Green shot her documentary, she realized that the man Viktor Svyatski was not simply a Femen supporter, but he was actually the organization’s primary decision-maker, who controlled everything behind the scenes.

Green said that it was only gradually that she became aware of Svyatski’s influence. “Once I was in the inner circle, you can’t not know him. He is Femen.”

Green claims that she witnessed Svyatski being abusive to the Femen girls he dominated.

“He was quite horrible with the girls. He would scream at them and call them bitches,” she said.

While Svyatski was reportedly hesitant about being interviewed by Green, he eventually agreed. “The girls are weak,” he says in the film. “They don’t have the strength of character. They don’t even have the desire to be strong. Instead, they show submissiveness, spinelessness, lack of punctuality, and many other factors which prevent them from becoming political activists. These are qualities which it was essential to teach them.”

When asked directly if he started Femen “to get girls”, Svyatski replied: “Perhaps yes, somewhere in my deep subconscious.”

In a piece published in response to the controversy this week, Femen leader Inna Shevchenko hotly disputed claims that Svyatski had “founded” the group or that his influence undermined the group’s activism, but admitted that he had begun to “dominate” the organization, and called him “sexism, male domination, and oppression against women personified.”

“He was a man in a women's group, he was elder, smarter,” she wrote. “And us, those who were at the first stage of our feminism and activism, we were young and not experienced girls.”

“At the beginning, we didn't know how to resist and fight” Svyatki’s leadership. “From that moment on, I realised that the patriarchy was not somewhere outside. It was right in front of us, in Femen's office. And our global fight with patriarchy started with the fight in our own private life,” she wrote.

She also claims that Femen outed Svyatski from the organization not long after Green wrapped up her filming.

Shevchenko said that she is now building a “new Femen” that is facing the “biggest bastards of [the] patriarchal system”.

“During the last year, we did one of the most important acts in the history of the movement: we started our open war with religious institutions when we cut down a Catholic cross in Kiev, when we attacked the Pope in the Vatican and when we started our historical anti Islamists campaign in Tunisia.”

“Femen is a women's power,” wrote Shevchenko. “You can keep criticising us but we will keep fighting. Even if patriarchy is laughing at us today, it will cry in front of us tomorrow!”

Meet the Antigones: an antidote to breast-baring ‘terrorist’ group FEMEN