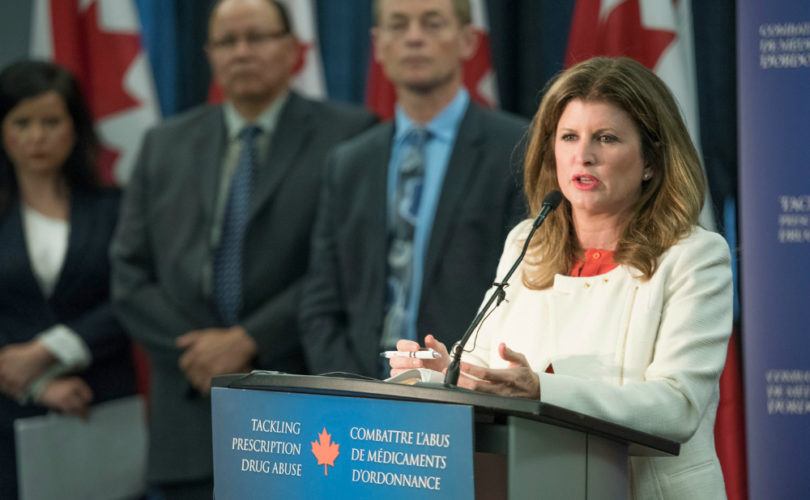 Conservative MPs and senators, who met Thursday for first time since Canadian voters ousted them from government October 19, elected the 46-year-old Alberta MP from a slate of eight contenders that included Manitoba pro-life MP Candice Bergen.

As official Opposition, the Tories face a 184-seat strong Liberal caucus led by aggressively pro-abortion Prime Minister Justin Trudeau, noted Gunnarson. “No leader, whether interim or otherwise, is going to hold sway over a government that is headstrong on abortion.”

On the negative side, it was on her watch as health minister in the last Parliament that Health Canada approved RU-486 in July, despite evidence the controversial abortion pill is dangerous and has been linked to two maternal deaths.

At the time, Ambrose distanced her ministry from the decision, claiming through a spokesperson that “drug approval decisions are arms-length decisions made by Health Canada officials based on analysis by Health Canada scientists.”

But Gunnarson says the Conservatives could have stopped it. “It’s a bureaucrat sort of thing, but let’s face it, the government’s in power, they could have done anything.”

On the plus side, Ambrose supported a number of pro-life measures, notably in 2012 MP Stephen Woodsworth’s Motion 312, which called for a committee to review the existing law that an unborn child is a legal person only after it emerges fully from its mother’s birth canal, and to study current science on when the unborn child becomes a human being.

By doing so, Ambrose defied Prime Minister Stephen Harper, who pressured his cabinet to oppose the motion.

Moreover, as then-minister for status of women, Ambrose was fiercely criticized, with thousands signing an online petition calling for her to resign because she had allegedly betrayed the feminist cause.

But Ambrose defended her vote, tweeting that: “I have repeatedly raised concerns about discrimination of girls by sex selection abortion. No law needed, but we need awareness!”

On balance, Gunnarson says, Ambrose’s absence for the vote on MP Rod Bruinooge’s Bill C-510 to protect pregnant women from coercion to abort, her inaction on RU-486 and her public comments “do not give us a sense of confidence in her ability to fend off a thrust by the Liberal Party to increase access to abortion.”

More recently, she told CTV in 2013: “Stealing a quote from someone I admire very much, Hillary Clinton, I believe abortion should be safe, legal and rare.”

First elected in 2004, Ambrose was given the environment portfolio in February 2006, making her, at 36, the youngest woman in Canadian history to be appointed to cabinet.

She has since been minister of intergovernmental affairs, western economic development, labor, public works and government services, status of women, and health.

“Of all the candidates, she’s got a really good sense for the job at hand,” says Gunnarson.

“We’re going to have the strongest opposition party that Canadians have ever seen,” Ambrose said after her election. “My colleagues chose me and they put their trust in me. We feel very optimistic about our chances in the next election.”

As leader of the Opposition, she will receive an $80,100 over and above her MP’s salary of $167,400, have her own car and driver, and live at Stornoway, the official residence for the Opposition leader.

According to the CBC, Ambrose will “not likely be eligible” to run for permanent leader, but “the rules around a leadership contest are not expected to come before January.”